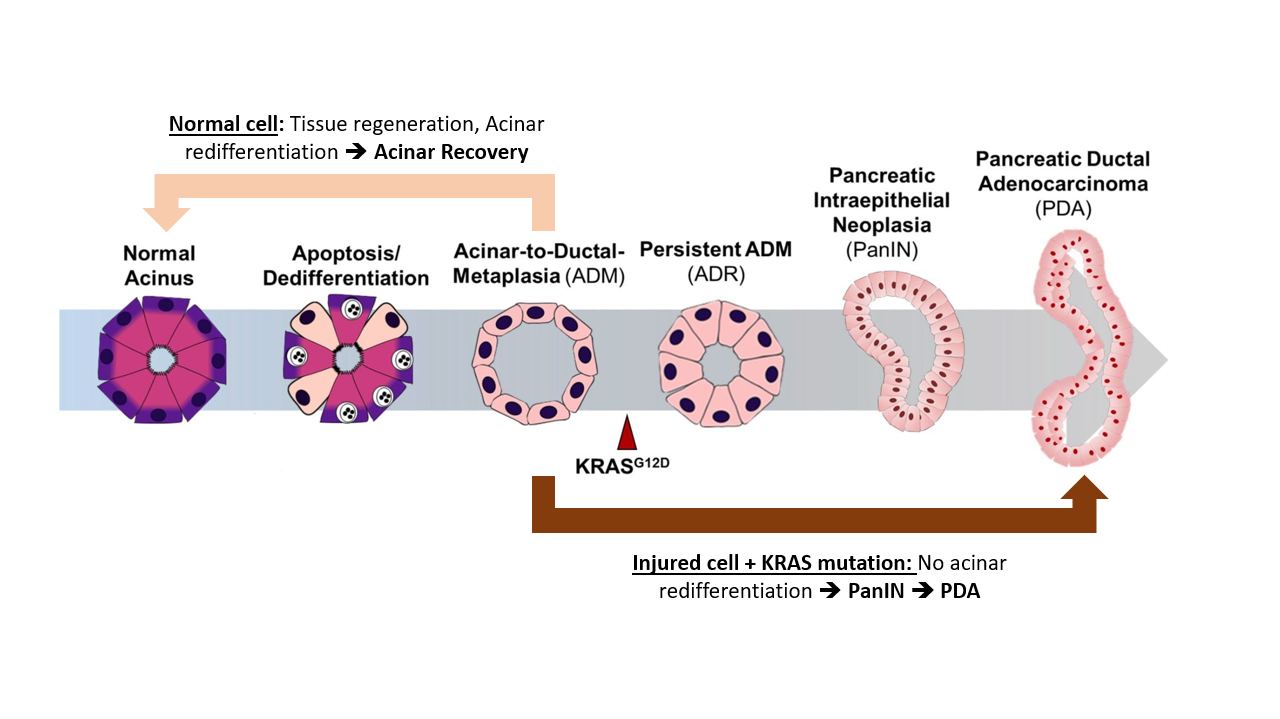 “At the age of 47, when I know that I have cancer, my only wish is to make it to 50”. Being notorious for being the most lethal cancer type and that there is no existing effective treatment, pancreatic ductal adenocarcinoma (PDAC) – a type of aggressive pancreatic cancer- is truly a death sentence to those who have it. Interestingly, tracing back to the most fundamental question about the illness, its mutual interconnections with cancer-associated mutated gene and tissue injury is not well-understood. Gladly, recent breakthrough research – published in the Nature Communication journal on 29th January 2020- carried out by a group of scientists coming from the Memorial Sloan Kettering Cancer Center, New York, USA has divulged that tissue injury, gone hand in hand with the resulting inflammation (termed pancreatitis), would collaborate with the mutated cancer-causing gene, known as KRAS oncogene, to accelerate the formation of an early abnormal pancreatic tissue growth and ultimately, pancreatic tumour[8].

Researchers from the Memorial Sloan Kettering Cancer Center have long sought a feasible clarification as to why “gone-wrong” pancreatic cells (with the mutations in the KRAS gene – encodes information for a protein known as GTPase, an elemental player in regulating cell communication)[9] respond to environmental stimuli so different as compared to how cells without the abnormality do. And by utilizing sophisticated genetic technologies, the team has been able to engineer mice that empower them to embark on their journey of finding answers to the baffling enigma of pancreatic cancer.

WHAT DID THEY DO?

During the investigation, after the pancreatic tissues being treated by different chemicals, the authors discover that:

“The regeneration process of damaged mouse pancreatic cells after tissue-injury-mediated (ADM) was impaired in mice with a Kras mutation”[10], reported the team.

This suggests that such a particular group of mice might have lost the ability to “heal” the wounds in their pancreas and recuperate. Moreover, the team also makes a striking remark that:

“Unlike normal mice, those with mutant KRAS rapidly developed a type of premalignant cellular growth — described as pancreatic intraepithelial neoplasia — that is a precursor to the pancreatic ductal tumour formation [10][Fig.1], said the researchers.

Figure 1 (from Chuvin, Nicolas, David F. Vincent, Roxane M. Pommier, Lindsay B. Alcaraz, Johann Gout, Cassandre Caligaris, Karam Yacoub, et al.[2]): This diagram illustrates how KRAS mutation drives pancreatic cancer in the condition of tissue injury by curbing a process known as “redifferentiation” – where unspecialized cells “recover” back to the functional acinar cells. Thus, this restricts acinar cells (a type of pancreatic cell that comes together to form bundles and produce pancreatic[4] juices) from obtaining their normal morphological and biological characteristics. As a result of this unfavourable incidence, injured cells slowly enter the premalignant phase, and eventually, the malignant phase.

All of these are very plausible. Indeed, the injury of the pancreatic cells could stimulate a process known as rapid-cell-fate-transition[2], causing cells to become less specialized and launching an acquisition of a new characteristic named “duct-like state”; such conversion is regarded as acinar-to-ductal metaplasia (ADM)[1]. In normal cells, all of these issues will be resolved once tissue renewal and cell “reprogramming” proceed, which would help the tissue to regain its specific job within an organ. Yet, in the company of KRAS mutation, ADM would dysregulatedly persist, progressing into a type of premalignant growth (pancreatic intraepithelial neoplasia (PanIN))[7] that is a precursor to pancreatic ductal adenocarcinoma – the highly aggressive lethal malignancy [Fig.2].

Figure 2(from Li, Qianyu, Qing Wei, and Yalei Dai[5]): This diagram illustratively captures how the pancreatic tissue changes histologically as it transits from being a healthy tissue to being a “forerunner” of pancreatic cancer.

Undeniably, developments of pancreatic abnormal masses in the KRAS mutant mice, 48 hours [1] after tissue injury, prompt the researchers to surmise irregular changes that are not directly made onto DNA (so-called epigenetic), entailing physical and chemical alteration in chromatin (a macromolecular complex of DNA and histone proteins), may underpin tumour pathogenesis in the setting of gene mutations and environmental insults.

VENTURE ON THE NEW JOURNEY:

To gain a deeper insight into this, Alonso-Curbelo and fellow researchers develop a chromatin-accessibility-map of mice pancreatic cells, which measures and compares the number of open chromatin regions (the location where proteins known as “transcription factors” gain access to DNA and regulate processes by which the information encoded in a gene is used to assemble new protein molecules[3]) that are either gained or lost in healthy tissues versus malignant tissues. Eventually, the team finds that the chromatin accessibility profiles of KRAS mutants are nearly identical to that of PDAC cells. More significantly, it is observed that:

This points out the significant difference that distinguishes between normal vs abnormal cells: a change in chromatin structure. After all, we can see that tissue injury will work jointly with the mutant KRAS to inaugurate the chromatin remodelling program[1] – an essential component of tumour initiation.

Nevertheless, they persist to further examine the genes that are responsible for malignant transformation of the cells; the scientists focus on a particular gene known as IL33 (alarmin cytokine interleukin 33 – an injury-facilitated factor that mediates wound healing and tissue repairing responses)[6], whose expression is elevated during the malignant transformation. They unearth some fresh evidence that supports that affirmation above:

“…injured pancreatic cells with KRAS mutations had greater chromatin accessibility in the region encoding IL33 and higher expression of IL33 compared with the situation in injured cells with normal KRAS”[10] reported Alonso-Curbelo and colleagues.

To evaluate and validate the significance of IL33 to the formation of tumours, Alonso-Curbelo et al. treat the injured cells with extra IL33. In the end, they observe an acceleration in the development of neoplasia, which therefore confirms the importance of IL33 in cancer pathogenesis.

In closing, it is crystal clear that these findings might have far-reaching implications in the field of cancer biology; by enabling us to understand how the gene (or mutation in gene) interacts with the environment (for example tissue injury) and how such interaction could facilitate the eventual epigenetic changes program that promotes early neoplasm, it provides prospects in developing strategic therapies to:

“Prevent, detect, and intercept tumours before they evolve to an intractable stage”[1], zealously noted the research scientists.