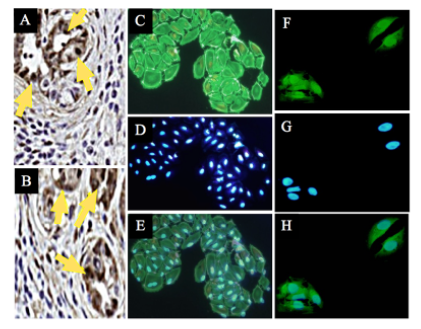 Pancreatic adenocarcinoma, accounting for about 85% of pancreatic cancer cases, has poor prognosis and survival rates; novel therapies are needed [1,2]. A core pathway in cancer development is the Hippo Signaling Pathway: a signal cascade that inhibits protein kinases such as the Yes-Associated Protein (YAP) and transcription cofactors such as TEAD, to control organ size and growth through regulation of cell proliferation and apoptosis [3,4]. Deactivation of the Hippo Signaling Pathway leads to uncontrolled cell proliferation, and hence cancer. Previous studies have identified Flufenamic Acid, an anti-inflammatory medicine, as an effective drug in modulating growth in aortic smooth muscle cells [5]. This study illustrates that Flufenamic Acid is also effective in murine pancreatic adenocarcinoma cells (LTPA cell line) by inhibiting the YAP- TEAD interactions that are key to the deactivation of the Hippo Signaling Pathway. This study confirms the efficacy of Flufenamic Acid in inhibiting YAP-TEAD activity, indicating the pathway’s direct role in cancer pathogenesis. YAP-TEAD complexes are promising molecular targets and Flufenamic Acid has clinical potential for pancreatic cancer treatment development.

Pancreatic cancer is the fourth most common cause of death from cancer [1]. Because there are no specific, cost-effective tests that can easily and reliably detect early-stage pancreatic cancers, pancreatic cancer is difficult to diagnose [2]. Symptoms normally do not appear until later stages when the cancer has already progressed to a stage that makes the few options available impossible [2]. While more therapies and clinical studies are being implemented to improve patient outcomes and find a cure for this difficult-to-treat cancer, novel treatments are sorely needed.

The Hippo Signaling Pathway is a key signaling cascade involved in the regulation of organ size and tissue growth [3,4]. Originally discovered in Drosophila, its core protein regulators are highly conserved in mammals [4]. The pathway consists of a protein kinase cascade where the

Flufenamic Acid is an inexpensive, non-steroidal anti-inflammatory drug (NSAID) first known to have anti-inflammatory properties in the 1960s [8]. Since then, it has been shown to act as an ion channel modulator [8]. Additionally, Flufenamic Acid has been proven effective in inhibition of cell proliferation, clonogenic activity, migratory ability and gene expression in aortic smooth muscle cells [5]. Due to the high rate of gastrointestinal side effects, Flufenamic Acid has not been used in the US. However recent research studies confirm the efficacy of Flufenamic Acid in bladder cancers in mice, re-paving the way for a new path for cancer therapy research [9].

Despite these studies, the efficacy of Flufenamic Acid against pancreatic cancer cells has not previously been researched. This study shows that rather than binding directly to the YAP binding site on TEAD transcription factors and preventing YAP from interacting with TEAD, Flufenamic Acid has a higher affinity for a separate pocket on the TEAD surface, disrupting YAP-TEAD from activating target transcription genes after YAP and TEAD have already interacted. This study examines the potential of the Hippo Signaling Pathway by targeting the YAP- TEAD complex with Flufenamic Acid and establishes a foundation for future treatment studies.

Eight two-fold dilutions were carried out from the Flufenamic Acid stock solution and was added to each specified well with one control well containing cells with no Flufenamic Acid, and another control well containing media only. After 48 hours of continuous drug exposure at 37 °C, 10 μL of WST-8 Viability Assay Reagent (Dojindo Molecular Technologies, Rockville, MD) was added into each well and the plate was incubated for 2 hours at 37 °C. In order to calculate relative cell viability, absorbance value from the wells with WST-8 and no cells was subtracted from the absorbance values of all other wells and these values were divided by the absorbance value of the negative control wells (cells only). Values were obtained from iMark Microplate Reader. Each concentration was tested 3 times in replicate wells and average cell viability assay percentages were calculated.

Flufenamic Acid effectively inhibited LTPA cell proliferation seen in the cell viability assay results (Figure 6A). At a 160 μM concentration, approximately 52.7% of the cells survived. Among the three trials tested, this concentration had a low standard deviation of 4.15. The dose- response curve generated for the viability assay is similar to the first half of the expected backwards S-shaped curve. A top plateau, sharp decline in the middle, and approach towards a bottom plateau is seen (Figure 6B). In all three trials, cell viability noticeably decreased with Flufenamic Acid treatment, while YAP expression locations did not change.

Computational and structural analysis of the YAP-TEAD complex in relation to Flufenamic Acid presented two possibilities:

1) Flufenamic Acid attaches to TEAD2 at Interface 3, preventing YAP from completely binding to TEAD2 and turning off transcription.

2) Flufenamic Acid attaches to a separate site- the central pocket- and YAP still binds to TEAD2 but protein function is inhibited and transcription is turned off.

The former possibility inhibits YAP binding to TEAD2 while the latter still allows YAP-TEAD2 binding but inhibits its functioning afterwards. The latter was more probable due to the larger volume and more residues available for binding in the central pocket, in addition to its higher druggability probability.

The cell viability assay illustrated the efficacy of Flufenamic Acid in inhibiting pancreatic adenocarcinoma cell proliferation by approximately 50% with a concentration of 160 μM. The immunocytochemistry results confirmed the elevated presence of YAP and its staining pattern [10]. The immunofluorescence results elucidate the differences in nuclear and cytoplasmic retention of YAP that were not apparent from the immunocytochemistry. If Flufenamic Acid only attached at Interface 3, YAP would not bind to TEAD in the first place and increased unbound YAP would be present in the nucleus with an appreciable amount of YAP remaining in the cytoplasm. If Flufenamic Acid only attached to the central pocket, YAP would still translocate to the nucleus and bind to TEAD but transcription would not be turned on and there would be a much higher density of YAP retained in the nucleus. The concentrated clusters of YAP apparent in the nucleus from the immunofluorescence in comparison to the cytoplasm after drug treatment suggest that Flufenamic Acid interacts with the central pocket. Additionally the increase in density after drug treatment confirms the more probable dominant manner that Flufenamic Acid would act on the central pocket.

This suggests a novel role that Flufenamic Acid plays in the Hippo Signaling Pathway, preventing cancer cell proliferation in pancreatic cells. By binding to the central pocket, Flufenamic Acid inactivates proper functioning of the YAP-TEAD complexes. In turn, although this would not reverse the dysregulated pathway completely, it would assist in preventing metastasis and pancreatic cancer progression by inhibiting the unchecked cell proliferation that occurs after YAP-TEAD functioning [15]. Some other targets of the Hippo Signaling Pathway in past research include inhibition of YAP nuclear translocation, upstream regulators and YAP binding to other transcription factors [11,12]. However the small volume of space available at the YAP binding domains poses a difficulty in developing drugs that can effectively inhibit binding activity. Flufenamic Acid takes advantage of the larger and highly druggable central pocket space to inhibit YAP-TEAD in a different manner. Many common drugs and their analogs have been tested to regulate the Hippo Signaling Pathway but have failed due to limitations.