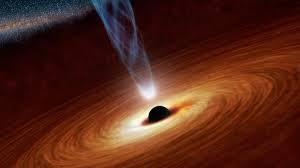 This paper will look at the nature of the black hole, how it was discovered, how they are classified, how it creates problems with conventionally accepted physics like general relativity, why black holes are hard to study, and what Stephen Hawking’s Black Hole Information Paradox is. In the first section of the paper, the discovery of the black hole through the works of various scientists like Albert Einstein and Karl Schwarzschild was researched. Then, the types of black holes based off of their size were studied. The paper then focuses on how black holes are affected by and affect physics. It explains how a black hole is problematic to study, and, using general relativity, the paper explains that the collapsing of a black hole creates infinite gravity, density, and bend in the spacetime curve, which breaks down formulas of physics. Finally, the Black Hole Information Paradox that comes with Stephen Hawking’s discovery of black hole radiation was studied. It is hoped that readers will learn more about black holes and their impact on physics through this paper.

Fig.1: A rendering of a black hole from Interstellar.

There is one in center of each and every galaxy, yet it has never been seen. It has been studied rigorously for decades, yet it is still not fully understood. It breaks rules of physics simply by existing. What is this object? It is a black hole; a place in space with such an immense gravitational field that nothing, not even light, can escape.

The History and Discovery of the Black Hole

Even though the modern idea of the black hole has only existed since the early 20th century, the concept of black holes has been around for centuries. In the year of 1783, John Mitchell theorized of a dark star, a star so massive that its gravitational force trapped light. While Mitchell may have created the concept of the black hole, no credit is given to him for he never expanded on his idea. For more than two centuries, the theory of an object massive enough to trap light was left alone as physicists focused on other aspects of the universe. Then, Albert Einstein discovered general relativity, and the attention paid to black holes erupted.

To understand how black holes function, it is necessary to understand the theory of relativity. In Einstein’s theory of relativity, Einstein postulated that space and time, together known as space time, were in fact warped by massive objects. The more massive the object, the larger the impact in has on space time. The curves created by objects form a sense of gravity and replace the gravitational force that classical physics preached. In contrast to a force pulling all objects with mass together, objects are instead caught following the straight path in warped area, known as the geodetic effect, of a massive object. By bending space-time, massive objects can also “bend” electromagnetic waves that travel on these curved surfaces. By creating his theory of general relativity, Einstein set the stage for black holes to make a reemergence in the world of physics.

While Einstein’s general relativity allowed black holes to exist, Einstein was not responsible for the modern idea of black holes; Karl Schwarzschild was. In 1916, Schwarzschild postulated that if the mass of something extremely massive had a small enough size, the escape velocity, or velocity required for an object to escape the gravitational pull of another object, would equal or exceed the speed of light. With an escape velocity this large, no matter or radiation would be able to escape from the object, and atomic forces would be cancelled out by the massive gravitational force emitted from the object, causing the object to turn into an infinitesimal point, or an object without volume, existing at only a single point in all of space. The area where nothing can escape from the gravitational force of this theoretical object is called the event horizon, and Schwarzschild found a way to calculate it. By using the escape velocity formula with an escape velocity equal to the speed of light, Schwarzschild calculated the radius of the event horizon, otherwise known as the Schwarzschild radius. The formula to calculate this radius is , with G equalling the gravitational constant, M equaling the mass of the object, and c equalling the speed of light. Any object with a radius less than the Schwarzschild radius of that object becomes black hole. Because Schwarzschild’s work was purely theoretical, its significance was largely overlooked by prominent scientists. Even Einstein believed that while black holes could be possible, they would not be allowed by nature itself.

As time passed, black holes became more popular and accepted. In 1964, John Wheeler became the first person to use the word “black hole,” and six years later, the first black hole, Cygnus X-1, was discovered. The black hole was finally proven to exist. Once physicists began to increase the energy put into studying black holes, they began to tear down modern laws of physics with each new discovery.

What are Black Holes and How are They Classified?

The Black Hole: A Physics-Breaking Machine

Once an object has passed the event horizon, space, time, and light warp for both the object and an observer. To discover the effects a black hole has on the object, it is necessary to take another look at general relativity.

While general relativity is famous for redefining what gravity is, it does more than just that. General relativity also opens gravity up to change the time and the light. According to Einstein, gravity affects the passing of time and allows it to be relative to the observer of time. A result of this discovery is that objects in a stronger gravitational field experience time slower in relation to people in a weaker gravitational field.

Time is not the only thing that is affected by gravity; light can change color simply by being put under a gravitational force. To escape a depression in spacetime, light must lose energy, but Einstein had previously shown that light travels at a constant speed in special relativity. How can light lose energy without losing speed? Well, wavelength and energy and inversely related, meaning by increasing one of these variables, the other decreases. For light to lose energy, it simply must increase its wavelength. This causes a redshift in color that affects all light travelling through valleys in spacetime.

While black holes seem exciting to experiment with, there are problems that make viewing black holes nearly impossible in any future.

The first problem with viewing black holes is the very simple fact that light cannot escape the gravitational pull of a black hole. Because no light escapes the event horizon, a black hole cannot be viewed from the exterior of it.

These issues with black holes have made any experimental work on black holes nearly impossible. In fact, the current world only has theoretical physics to rely upon when the subject of black holes is brought up. To add upon the difficulties of studying these jails of everything, black holes also seem to break laws of modern physics.

In the singularity of a black hole, the point where all the mass has collapsed to with an infinite density, science doesn’t function properly. According to Schwarzschild and backed up by general relativity, collapsing stars will continue to collapse until it forms one point and tears a hole in space-time. This causes density, gravity, and the curve of the space-time to all be infinite. By simply having infinite quantities of a variable, equations begin to break down and physics already begins to crash. Unfortunately, the collapsing of a star and all things that fall into a black hole into one point creates paradoxes and problems with modern physics.

Within the realm a black hole, the physics of general relativity and quantum mechanics, the science of subatomic particles, come together and are both applicable. This may not seem terrible, as both theories are widely accepted and understood, but it is worse than expected. In reality, general relativity and quantum mechanics are completely incompatible, and they both predict different things to happen in black holes, causing paradoxes to form.

The main paradox created is the black hole information paradox. This paradox was created by a discovery made by Stephen Hawking in 1975. In this year, Hawking postulated that black holes radiate particles, shrink, and eventually disappear from existence. This phenomenon is known as Hawking radiation, and it changed the way physicists looked at the big, bad black hole.

Stephen Hawking’s theory posed serious problem for physics. On one hand, general relativity states that nothing can escape a black hole and information will be lost forever. On the other hand, quantum mechanics states that information must be conserved.

When Hawking radiation was first theorized, quantum mechanics faced serious trouble. Because the particles do not seem to come from inside the black hole, information from the black hole apparently disappears and violates the Law of Conservation of Information, a critical law to quantum mechanics. To some physicists like Stephen Hawking, the simple conclusion was that information could be destroyed. This conclusion was troubling for some physicists because it would mean quantum mechanics was incomplete, but they eventually came up with theories to combat the paradox.

The main theory to combat the black hole information paradox and Hawking’s conclusion that information can be destroyed was created by Leonard Susskind of Stanford University. He believed the opposite of Hawking; quantum mechanics are correct and general relativity needs to be fixed. Susskind postulated the new and theoretical idea called black hole complementarity. It states information is both trapped inside the event horizon and reflected on the surface of the black hole. Observers inside the black hole only see the information inside the black hole while observers outside it see information gather up at the event horizon and radiate as Hawking radiation. Because neither side can communicate with each other, there is no paradox created. This theory requires another idea to be true, holography. This idea says that the physics in the three-dimensional black hole must be describable as physics from the two-dimensional surface area of the black hole. While black hole complementarity and the resulting holography seem insane, the ideas gained popularity quickly. Eventually, the concept that general relativity needed to be fixed while quantum mechanics was right became the majority in the world of science. Eventually, even Hawking sided with quantum mechanics when he redid his calculations and came to the conclusion that as an object falls past the event horizon, it disturbs the black hole’s radiation field. This would cause the information about the black hole to seep out and keeps the Law of Conservation of Energy intact while creating a black hole that isn’t completely black.

Creation of Black Holes – Black Holes and Wormholes – The Physics of the Universe. N.p., n.d. Web.

Event Horizon and Accretion Disk – Black Holes and Wormholes – The Physics of the Universe. N.p.,