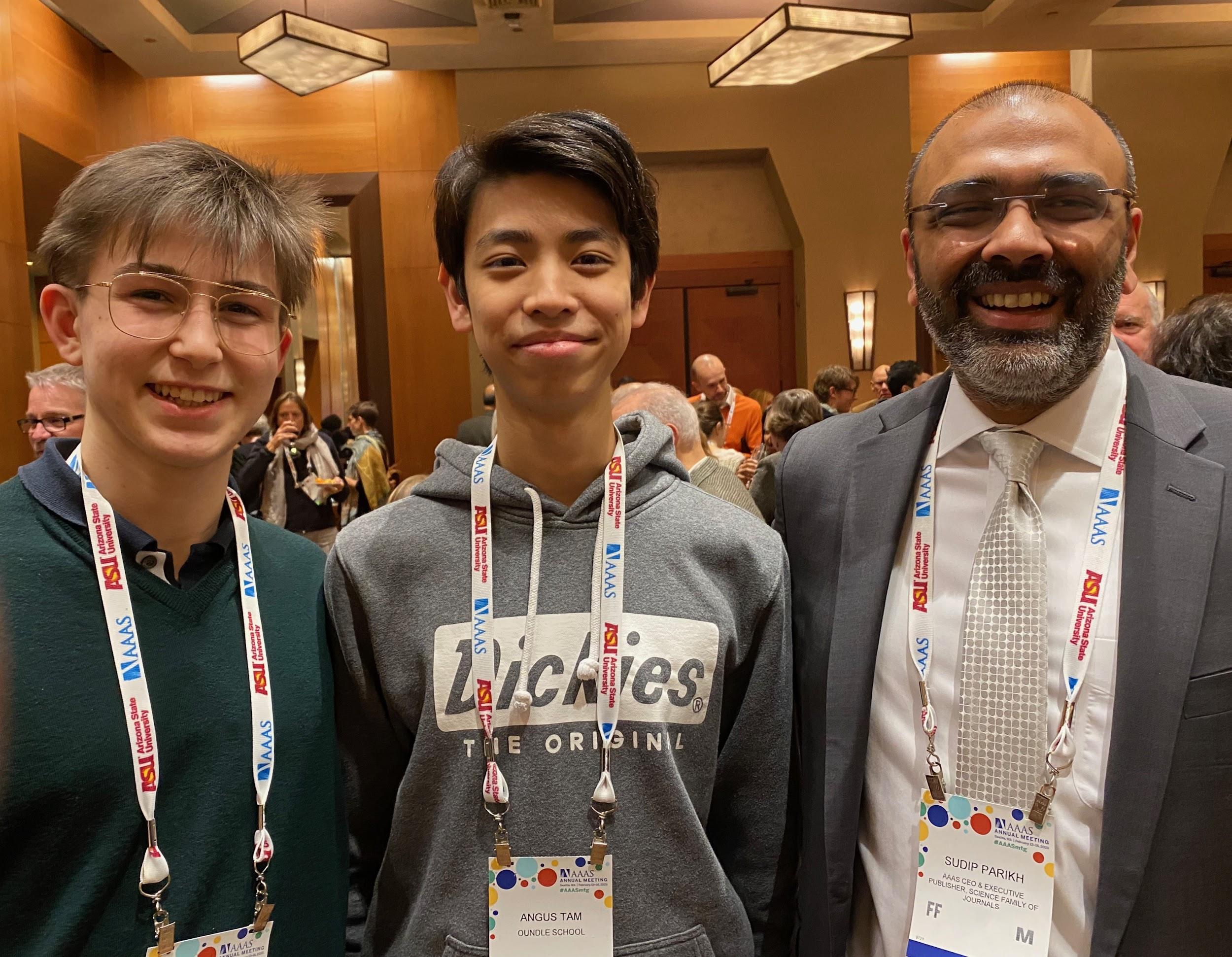 AAAS stands for the American Association for the Advancement of Science. Since its formation in 1848, it has been dedicated to the scientific community in America (and, more recently, worldwide). As part of a yearly trip, Oundle School attended the 186th installment of the AAAS annual meeting in Seattle, WA. The students were also invited to the Public Engagement with Science Networking Reception, where they benefited from scientific leaders such as the CEO Sudip Parikh. This year’s AAAS meeting focused on “Envisioning Tomorrow’s Earth”. This focus shined throughout, but a huge variety of talks were held each day – so many that members from Oundle felt it daunting at first to decide which particular talk to attend! In this article, I hope to reflect on the effectiveness of the annual meeting and the actions of the AAAS as a whole; I will be exploring how the AAAS contributes to and inspires future generations to pursue science.

The event was headlined by a series of plenary sessions in the Washington State Convention Center’s main showroom; these sessions were designed to address some of the most immediately pressing issues facing scientists in this day and age. For me, the three most interesting sessions were those right at the start, right in the middle, and right at the end of the event. Kicking it off was Stephen Chu, the AAAS President’s address, followed by Bill Gates’ talk on gene editing. The annual meeting was concluded by Krysta Svore’s enthralling speech about the scientific benefit of quantum computing. All three lectures were massively enjoyable and, while they tackled diverse arguments, a common theme shone through. Multidisciplinary, international, and innovative approaches to science were unanimously described as the main areas for improvement in today’s science.

Chu, the 1997 Nobel Prize in Physics winner, addressed the need for more global influence in U.S. science: he noted that, significantly, 34% of American Nobel Prize recipients have been immigrants. Similarly, the President of the AAAS, stated “The U.S. should respond by increasing investment in science, technology and STEM education”, and Bill Gates also discussed the importance of education in tackling child malnourishment. Co-founder of Microsoft, the billionaire quoted that, because more than 250,000 children worldwide are malnourished, there is a need for low-cost, high implementation solutions. His speech about gene editing and AI particularly impressed me, as it showed the potential for huge leaps in computing power to help more people, more efficiently. What distinguished Gates’ speech from others is his passion to find young scientists who are eager to learn. The search for these young minds is likewise what links Dr Svore’s quantum computer related lecture to both Gates and Chu’s speeches – and, on a wider basis, the purpose of the AAAS. Svore’s search for computers which go beyond the scope of normal processors mirrors the science industry’s need for young minds. This is because, as I learnt in many of talks such as “The Future of Earth’s Climate: A World of Extremes”, many of the issues being faced by scientists today are very pressing, and so require a new generation of multi-disciplined people ready to act. The AAAS was impressive in its ability to inspire both me and my colleagues to take action.

I particularly enjoyed Daphne and Charles Maurer’s lecture on “Constructing and Perceiving Beauty”. As an aspiring engineer, I felt it was important to branch out and learn as much about new topics as possible – I would probably not have this chance again. I found that the format for these lectures – three speakers one after the other, then 20 minutes for questions afterwards – was very effective in drawing me in. Sometimes, as with the beauty lecture, I was so interested that I stayed behind to debate and discuss the presentations. Overall, the AAAS annual meeting was clearly structured and well thought through: the format of both plenary sessions and lectures are designed to engage the audience. Reiterating upon my earlier point, all of the sessions focused on the need for international collaboration, an increasingly important factor when considering scientific communities. It is this, I think, that makes the AAAS provoke inspiration in young minds.

As part of the summit, on the 15th February, the “Annals of Improbable Research” were held. The purpose of this meeting was to honour the IgNobel prizes on what turned out to be quite an enjoyable night. Before the speech by Marc Abrahams, a small reception with many scientists working in varied fields was held. Along with great food, I also enjoyed talking to some of these important figures in the fields of science. First of these was Sudip Parikh, the Chief Executive Officer of the AAAS. While it was understandably an honour to meet such an important figure, I felt it was important to use this short time together to ask Dr. Parikh about “how the AAAS helps young minds develop and its [AAAS’s] influence” (the conversation was recorded to help with this article). The main topic of focus was “young people getting into the sciences” as they apply to university. Parikh’s mention of the AAAS’s “science curriculum which is project-based” did help to emphasize the point that, with meetings like the one my school attended, the Association is trying to entice more people to join the scientific community in ways that make it enjoyable because of the vastness of research. This particularly struck me, as I saw hard work and little fun when thinking of scientific research in large corporations. While, in retrospect, I now understand the former vision is true, the latter does not seem so. I find it incredibly rewarding that, as Dr. Parikh put it, the AAAS are looking for a person who is “not just a great scientist, but who is also able to interact and play a role”. As he put it, you need to know the Krebs cycle, the Business cycle, and the Legislative cycle to succeed. To me, that makes the whole experience much more gratifying.

We also were lucky enough to talk to the UKRI executive chair, David Sweeney, pictured above

To get a better insight into how the students themselves should prepare themselves for work at this scientific community, I thought it wise to ask Dr. Julia Wilson, Associate Director at the Wellcome Sanger Institute. When asked how the AAAS helps young people to “develop into university and science”, she mentioned how, while schools used to teach primarily the three distinct sciences – Biology, Chemistry, and Physics – “nowadays there’s a need to be a polymath in the different technologies”. Because she mentioned how, at her company, they train bright individuals who are well versed in every aspect of science (they later go on to specialize), I was quite impressed by the underlying requirement for this aforementioned need for a multidisciplinary approach to science. Furthermore, I think the speech we listened to after these interviews help to cement this idea that the AAAS is helping raise awareness for this necessity – an impressive feat, no doubt. Speaking about the IgNobel awards (and wrapping up a brain-wrecking trip), Mr. Abrahams presented the concept of “Improbable Research”. While skeptical at first, I found the concept of “laughter first, science after” important to help share scientific ideas to a wider community. Such is the purpose of the AAAS, the meeting of which we attended made me happy to be a scientist: not only because of the variety of subjects to study from but from the pure joy it is clear the scientific community derives from innovations in any field – be that Silvano Gallus’s IgNobel Prize “for collecting evidence that pizza might protect against illness and death, if the pizza is made and eaten in Italy” or the discovery of the Higgs Boson, I am happy to say I appreciate the work behind both analyses.

[4] The Annals of Improbable research. https://www.improbable.com/ig-about/winners/

Giovanni Bernardi is an Italian Year 12 student currently studying in Oundle, England. He is studying Mathematics, Further Mathematics, Chemistry, Physics and History. He has a keen interest in the sciences and is always on the lookout for the next scientific innovation.