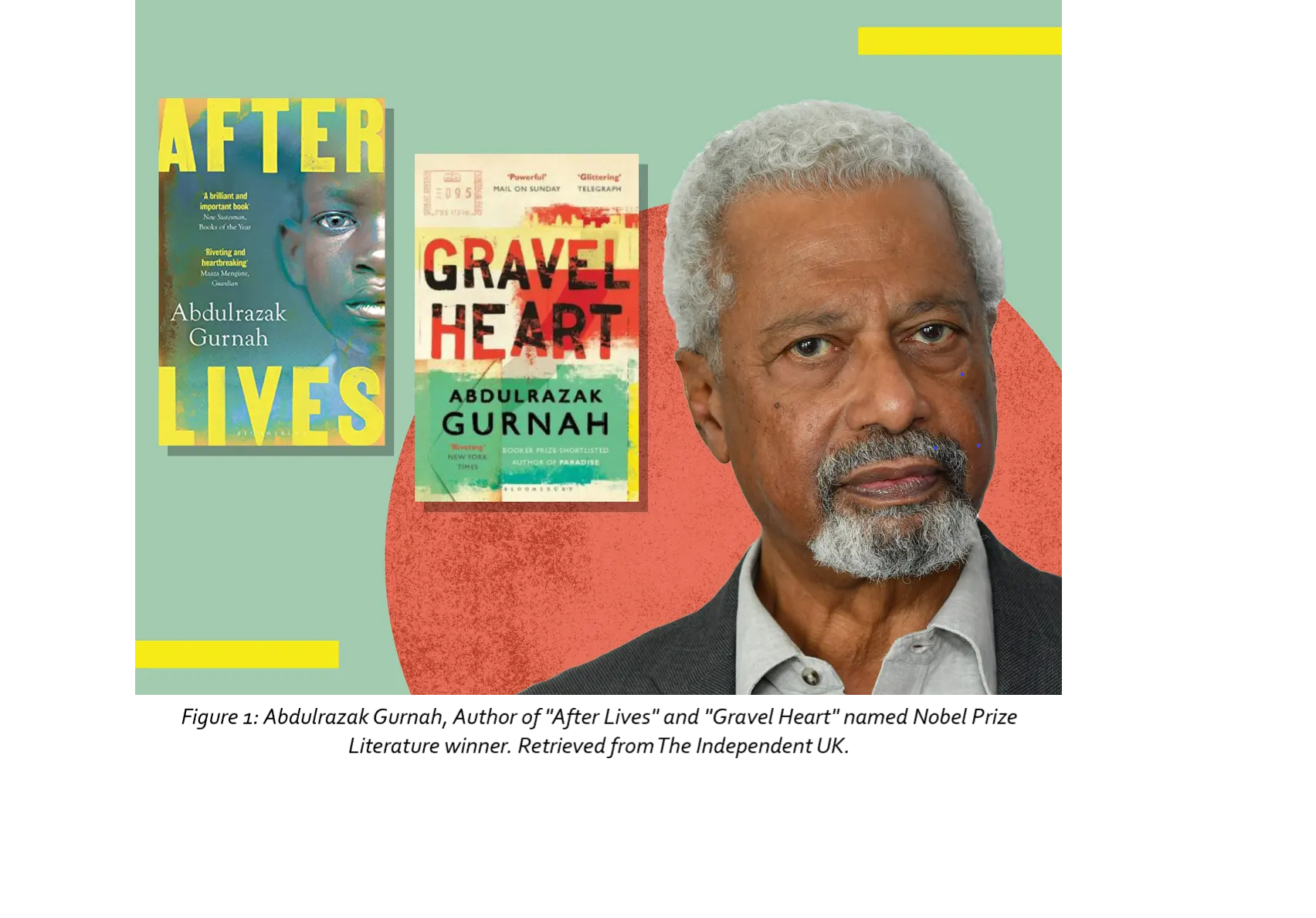 Abdulrazak Gurnah, zanzibar-born novelist and recently retired literature professor, Has Won the Nobel Prize for Literature on Thursday morning. His well deserved win comes decades after the last black winner, Toni Morrison in 1993.[1] As the first African to win the award in more than a decade, some spectators deemed his win long overdue after years of European and American nobel laureates.

In his novels, Gurnah explores the themes of ostracization, personal identity, and belonging. Honored for his “uncompromising and compassionate penetration of the effects of colonialism and the fate of the refugee in the gulf between cultures and continents,”[2] Gurnah was awarded 10 million Swedish Kronor. Genuinely capturing the immigrant experience, his novels reflect his own life experiences. When Gurnah received the call announcing his win, he was initially in disbelief. While making tea in his kitchen right before lunch, he received a call he deemed fake. Upon answering, a voice said, “You have just won the Nobel Prize for Literature.” Gradually persuading him into realization, Gurnah was ecstatic.[3]

Born in Zanzibar, an archipelago off the coast of Tanzania, Gurnah never imagines himself as a Nobel prize winner. Leaving the island after a violent uprising and overthrow of the ruling Arab elite during the Zanzibar revolution (1964), Gurnah arrived in England at the age of 18.[4] As a refugee facing unfortunate financial circumstances, he began to write about home in his diary. Transforming into longer entries to stories about other people, he learned to document and reflect on the effects of his own dislocation and its ties to trauma, colonialism, and war. Giving rise to his first novel to then 9 more, Gurnah was motivated by the idea of “losing your place in the world.”

Similar to his own experiences, the characters in Gurnah’s novels confront racism and prejudice, facing the gaps between cultures and continents. Drawing on the imagery and stories of the Quran, his work was not immediately popular with publishers. Looking to italicize or anglicize Swahili and Arabic references and phrases, British publishing wanted to make the “alien seem alien.” Facing many barriers along the way, Gurnah remained determined.

Fellow novelists and academics who have long argued that Gurnah’s work deserves a wider audience reacted positively to the news of his Nobel Prize. Maaza Mengiste, a novelist, described his prose as “like a gentle blade slowly moving in.” “His sentences are deceptively gentle, but the cumulative force felt like a sledgehammer to me,” she explained. “He has written work that is absolutely unflinching, yet completely compassionate and full of heart for the people of East Africa,” Mengiste said. “He’s writing quiet stories about people who aren’t heard, but there’s an insistence that we listen.”[5]

Gurnah has attempted to uncover “the way in which colonialism transformed everything in the world, and people who are still living through it are still processing that experience and some of its wounds” in both his scholarly work and his fiction.

The same themes that preoccupied him early in his career, when he was processing the effects of his own displacement, he said, feel equally urgent today, as both Europe and America have been gripped by a backlash against immigrants and refugees, and political instability and war have driven more people from their home countries. “It’s a kind of meanness and miserliness on the part of these prosperous countries to say, ‘We don’t want these people,'” he says.

Despite the fact that Gurnah hasn’t lived in Tanzania since he was a teenager, the country continues to inspire him. He claims that his homeland always asserts itself in his imagination, even when he consciously attempts to set his stories elsewhere. “You don’t have to be present to write about a location,” he explained. “It’s all in the fabric of who you are.”[5]