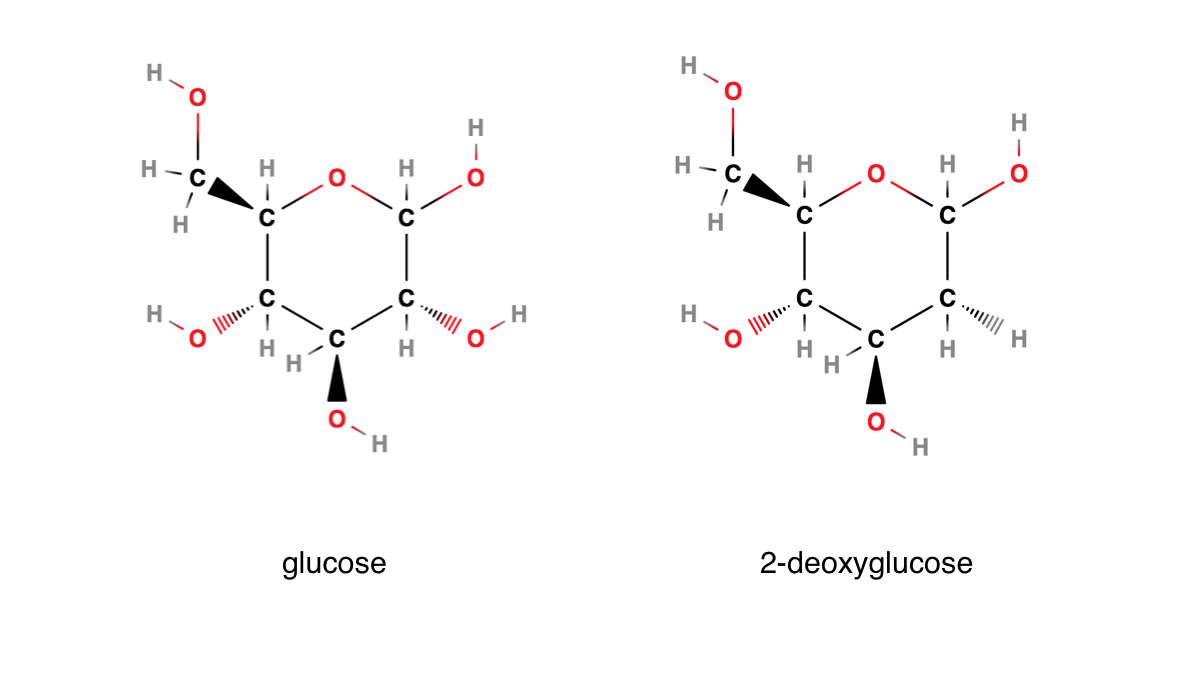 This article is an overview of aerobic cellular respiration and how the process can be influenced by glycolytic inhibitors as a potential cancer treatment.In the presence of oxygen, glucose undergoes a series of reactions characterised by the overall term “aerobic respiration” in order to synthesise ATP, which is crucial to muscle contraction and movement. Cancerous cells are more reliant on the first step of respiration – glycolysis – due to oxygen deficiency of malignant cells and mitochondrial mutations. Thus, the inhibition of glycolysis by the chemicals 2-deoxyglucose and lonidamine can be used to inhibit glycolysis in malignant cells and therefore kill cancerous cells by starving them of ATP. However, clinical trials have shown that glycolytic inhibitors alone are ineffective and unsafe in treating cancers, and further experimentation is needed in order to develop safer drugs or use glycolytic inhibitors in conjunction with pre-existing cancer treatments.

Biochemist Hans Krebs was the first to explain aerobic respiration (respiration involving oxygen) as a series of complex chains and chemical reactions1, a combination of processes that forms the fundamental basis for ATP. It’s vital that this process is understood, not only because we must have insight into the way our bodies work, but also because in understanding aerobic respiration there lies the potential to develop cancer drugs. While current radiotherapy and chemotherapy treatments can be effective, the treatments also harm healthy cells, causing side-effects and leaving room for improved alternatives.

Glycolysis, the Link Reaction, and the Krebs Cycle

Aerobic respiration, which releases energy from glucose in the presence of oxygen, must take place within a cell. Thus, membrane-based transport proteins allow the glucose to pass through the plasma membrane to enter the cell. Once the glucose has entered the cell a process called glycolysis occurs in the cytoplasm. The term phosphorylation describes the addition of a phosphate group to an organic molecule, lowering the stability of the molecule to increase the reaction rate in a metabolic pathway. A hexose sugar – namely glucose – is phosphorylated using ATP. The resultant hexose phosphate ( hexose phosphates are 6 carbon glucose – phosphate derivatives) is then split into two triose phosphates (triose meaning that 3 carbons are attached to the phosphate group), which are both oxidised as hydrogen is removed. This hydrogen is then added to an electron carrier, which transports electrons throughout respiration: the NAD electron carrier is reduced to NADH as a result of the added hydrogen.2 A net yield of 2 ATP is produced by substrate-level phosphorylation, which is the transfer of a phosphate group from an intermediate compound to ADP in order to synthesise ATP. Glycolysis concludes with the production of 2 pyruvates, which are 3-carbon molecules. These pyruvate molecules prove to be crucial in the link reaction, the next stage of respiration, where glycolysis is further decarboxylated. 3

Upon entering the mitochondrial matrix, the pyruvate from glycolysis is decarboxylated by enzymes known as CoA enzymes. “Decarboxylation” means that carbon is removed in the form of carbon dioxide, which is then excreted by the lungs. The pyruvate is oxidised as it loses hydrogen, which is then accepted by NAD, an electron carrier, for the reduction of NAD to NADH, the reduced version of NAD. Due to simultaneous oxidation and decarboxylation of the pyruvate, this process is known as oxidative decarboxylation. The product of this process is an acetyl group, a 2 carbon compound, which reacts with CoA in order to form the molecule Acetyl CoA.4 This then enters the “Krebs cycle”, the next step of aerobic respiration, for further oxidation. The Krebs cycle consists of a series of chemical reactions to ultimately yield further ATP and reduced electron carriers. The acetyl group, a compound consisting of 2 carbons, joins a 4 carbon sugar (i.e. a sugar molecule that consists of 4 carbon atoms) to produce a 6 carbon sugar (a sugar molecule consisting of 6 carbon atoms). The 6 carbon sugar undergoes oxidative decarboxylation to form a compound consisting of 5 carbons and CO2. Continued oxidative decarboxylation of this 5C-compound forms a 4C-compound and yet another CO2, producing an overall yield of two CO2’s, hence the decarboxylation. The reduction of NAD and FAD (both of which are electron carriers) to NADH and FADH2 (the reduced versions of these electron carriers), by the addition of hydrogen produces three reduced NAD and one reduced FAD per molecule of pyruvate. Throughout the process substrate-level phosphorylation (the transfer of a phosphate group from an intermediate compound to ADP in order to synthesise ATP) of ADP produces one ATP per pyruvate. However, given that one glucose molecule can produce two pyruvate molecules, the overall net yield of a glucose molecule would be 2 ATP, 6 NADH + H+, and 2FADH2. The NADH and FADH2 are vital in the provision of electrons to the electron transport chain, which constitutes the final stage of aerobic respiration and involves the movement of electrons through the inner mitochondrial membrane. 5

Chemiosmosis and the Electron Transport Chain

In brief, the electron transport chain is a series of integral proteins (proteins that go all the way through the membrane) embedded in the inner mitochondrial membrane, that help move the electrons from the FADH2 and NADH earlier formed to oxygen molecules. In this process, oxygen is reduced to form water and the electrons lose energy throughout the electron transport chain which is used to pump protons from the mitochondrial matrix to the intermembrane space to form a proton gradient. A process called chemiosmosis follows, which describes the diffusion of these protons back down the proton gradient through an enzyme which synthesises ATP (ATP synthase) to produce ATP, our source of energy. This complex process forms the basis for understanding where the energy around us comes from: glucose is the starting point for the synthesis of the molecule that sustains our ability to move, think, and synthesise proteins.6

Many cancer cells will exhibit increased glycolysis, using this additional ATP as an energy source. This metabolic phenomena is known as the Warburg Effect. The Warburg effect can be attributed to several different factors, such as mitochondrial dysfunction and hypoxia.

Studies have found that mitochondrial DNA – called mtDNA – in cancer cells has high rates of mutation, as observed in breast cancer, gastric cancer, prostate cancer, and leukemia. A reason for this could be that because the mitochondrial genome codes for 13 proteins that are part of the respiratory sequence, mutations in mtDNA are likely to therefore affect the proteins that play a role in the function of the respiratory chain. mtDNA is highly coding, meaning that it lacks introns (non-coding sections of DNA), therefore entailing a high probability of mutation in mtDNA affecting the corresponding proteins produced and respiratory function. While glycolysis occurs in the cytoplasm, the remaining stages of respiration occur in the mitochondria, meaning that the cancerous cell relies on glycolysis only for ATP production due to compromised mitochondrial function.7

Hypoxia is a deficiency in the amount of oxygen a tissue receives, and is often reported in malignant human tumours as the tumour grows to the point where oxygen penetration becomes limited. Due to the insufficient oxygen, oxidative phosphorylation can no longer proceed, causing an increase in glycolysis for ATP production. This increased glycolysis will aument lactate production, an organic molecule which constitutes lactic acid. This will acidify tumor tissue and allow the selection of malignant cells to survive due to their durability. Thus increased glycolysis acts as an adaptation to oxygen deficiency. Crucially, hypoxic cells relying on increased glycolysis will often become radiotherapy resistant due to the activation of a protein called HIF-1 which allows the cell to survive the treatment or drug.

Under aerobic conditions, pyruvate can undergo the Krebs Cycle and chemiosmosis, as early discussed, to generate large amounts of ATP. Because the production of ATP through oxidative phosphorylation produces 36 ATP per glucose molecule rather than the 2 ATP produced by glycolysis, the restriction of cancer cell respiration to glycolysis would mean that far more glycolysis would need to occur to maintain a sufficient amount of cell energy, causing the malignant cells to become addicted to glycolysis. This led to the hypothesis that inhibition of glycolysis would halt ATP production in malignant cells to starve the cells of energy, and ultimately kill the malignant growth. This could potentially pose a solution to the side effects of some current cancer treatments, which are indiscriminate in their impact on rapidly growing cells, therefore affecting normal but rapidly growing body cells8. The intact mitochondria in normal cells can use alternative energy sources such as fatty acids and amino acids rather than glucose upon glycolysis inhibition, and thus regular cells will be less sensitive to glycolysis inhibiting chemicals. Consequently, glycolysis inhibiting cancer drugs targeting only mutant mitochondria could revolutionise treatment for cancer patients, minimising side effects.

Lonidamine is another chemical which is known to inhibit glycolysis in malignant cells. Lonidamine seems to enhance aerobic glycolysis in regular cells, while repressing glycolysis of malignant cells, and the suspect cause is hexokinase inhibition, similarly to 2-deoxyglucose. Like with 2-deoxyglucose, lonidamine inhibits hexokinase to prevent the conversion of glucose to glucose-6-phosphate via phosphorylation. This inhibition of glycolysis has lowered ATP yield and enhances the activity of other anticancer drugs in order to treat breast cancer, ovarian cancer, lung cancer, and glioblastoma multiforme, an aggressive cancer within the brain. 10

Aerobic cellular respiration involves a series of complex steps which allow for the production of ATP. A glucose molecule begins in the cytoplasm where it undergoes glycolysis, ultimately moving into the mitochondria for the link reaction and the Krebs cycle. The final stages for the synthesis of ATP involve the electron transport chain and chemiosmosis, which catalyses the production of the molecule which is the human body’s source of energy, allowing for movement, protein synthesis, and cognitive function. However, understanding respiration entails more than just insight into how energy is created by metabolic processes. Actually, a study of the first stage of aerobic respiration – glycolysis – may hold the key to glycolytic inhibition techniques that could revolutionise the treatment of cancer. Cancerous cells with increased glycolysis as a result of mitochondrial mutations or hypoxia become increasingly dependent on glycolysis as a means for ATP production, and hence become more vulnerable to glycolytic inhibition. At the heart of understanding cellular respiration lies what could be a crucial part of the puzzle in improving cancer treatments for patients all over the world.

Jessica has an interest in biology and chemistry in particular, however is also fascinated by some of the philosophical and ethical aspects of science. Jessica is passionate about the idea of using science to improve the lives of others, and has a particular interest in the ethics and science of organ donation and transplant.