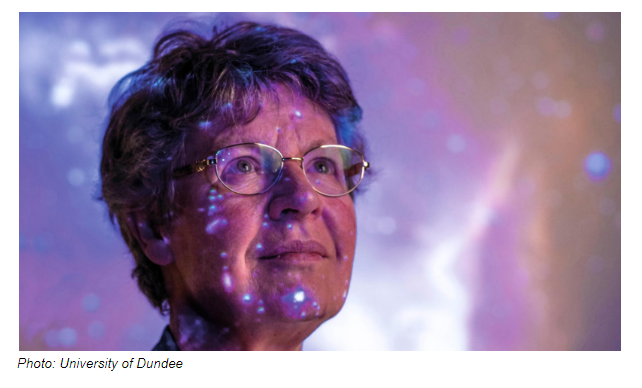 Professor Dame Jocelyn Bell Burnell is an astrophysicist from the University of Oxford, England. In 1967, Burnell’s work in astrophysics led her to the discovery of pulsars – round, compact objects that are roughly the size of a large city and have a larger mass than the sun. [1] This breakthrough is thought to be the greatest astronomical discovery of the 20 th century.

Thank you for speaking with me today, Jocelyn! Firstly, why did you decide to study astrophysics?

I was always good at physics. When I went through secondary school, I wondered what kind of physics I would ultimately do. My father loved to read, and he brought all sorts of books home from the library. One day, he brought some astronomy books home which I loved. Then, I decided I would become an astronomer. I was probably 13 years old at that stage.

I suppose it was great that you knew what you wanted to do from an early age?

Yes, it was helpful. If you hit a rough patch you say to yourself now “how badly do I want to become an astronomer?” My goal motivated me to get through this. Without my goal, I might’ve gone sideways or some other direction.

Can you describe how you felt when you first spotted the pulsars?

In the beginning, I couldn’t make a lot of sense in it. I couldn’t understand what might be giving that kind of unexpected signal. It was an intriguing puzzle, put it that way.

Since it has been over 50 years since you discovered those pulsars, why do you think people are still talking about them?

Pulsars are very useful for testing basic physics, such as relativity theory. They’re one of the few ways we have of testing some of these things. That’s mainly why they are still important. Pulsars are very extreme objects with strong gravity and electromagnetic forces. So, pulsars are highly dense objects themselves, so there’s nothing “normal” about them. They’re quite an academic challenge to understand given all those extremes together.

What do you think is the most interesting thing about pulsars?

There’s a lot of interesting things that we’re still a long way from solving, such as what they are like inside and how they produce the radio beam. We’re also using pulsars to test Einstein’s Theory of Relativity, which is interesting, and so far Einstein has checked out very nicely, thank you. Still, we’re continuing to push and push to lower and lower limits, and we’ll see what happens. There is, for instance, a bit of a problem relating gravity and quantum theory, and we think quantum theory’s okay, so is Einstein’s understanding of gravity a bit wrong? We don’t know. Time will tell, but that’s the kind of thing we’re pushing.

Are you glad you made such an important discovery so early in your career?

Oh, it has been immensely helpful. At that time in Britain, women didn’t have careers, so my discovery actually kept me in science. Otherwise, I would become a housewife.

Was it difficult being a woman in such a predominantly male field of study?

It has certainly been unusual. Often you were the only female in the place. For instance, in my university honors class, I was the only female. You couldn’t skip lectures, ‘cause it was all too obvious when you weren’t there, so that side of it was a bit of a burden; equally, if you were even half-intelligent, people quickly got to know who you were because you were the only female, so that was useful as well. So, it works both ways, but you are working in an environment that’s operating to male norms – assuming there’s a wife at home providing the meals, doing the shopping, and washing the laundry.

What I found frustrating was the way they treated young women at that time. After the discovery, there were a lot of television interviews. There’d be my thesis advisor and myself, and they’d ask him about the astrophysical significance of the discovery, which he duly gave them, and then they’d turn to me for what they’d call the ‘human interest,’ like how tall was I, what were my bust, waist, and hip measurements, how many boyfriends did I have, that kind of thing. I wasn’t a scientist; I was some kind of sex object.

Do you think we still have discrimination in the field of physics, and also in science as a whole?

I think we still do have a little bit of discrimination. We’re getting a lot better at it, and it’s beginning to change very fast, but, until very recently, the male life pattern has been the norm. It’s going, but it’s not quite gone yet.

Have you noticed a big cultural shift between what it was like when you started in the field and what it’s like now?

Oh yes, enormous. Women are still a minority in the physical sciences, in the biological sciences probably not so much so at the university level, but it’s an awful lot better than it used to be.

How do you think we can encourage more young women into the field?

I think partly by showing that there are women in the field. Maybe by profiling them, and that’s being done a bit. I think also to talk about how exciting science is. If you’re trying to sort out the coronavirus, for instance, making clear that it is relevant and not just an academic pursuit.

I also read that, while you were at university, you suffered a lot from the imposter syndrome. Did you ever manage to get rid of the sense that you weren’t meant to be there?

It’s gone with time. It was particularly acute when I finished my first degree and was starting in Cambridge to do a Ph.D. I think everybody suffered a bit from the imposter syndrome, I probably wasn’t alone in that, but I’ve been one of the people who has talked about it.

What future developments do you think we’ll see in the field of gravitational-wave astronomy (a field of astronomy that aims to use gravitational waves to collect data about objects in space) [2]?

That’s a hugely exciting field and really only just beginning. It has taken about forty years of work developing sensitive enough instruments, and we’re finding more and more out about gravitational waves. One of the things that are interesting is that, to date, most of the sources have been black holes, and we didn’t know there were that many black holes of that particular mass around. So, right from the first detection, there have been surprises, and there’s a lot more sorting out to do, but that’s one of the very hot areas at the moment with a lot of people working in it. The gravitational wave people are getting more and more efficient at picking up the signals and so on. We’re finding quite a lot of black holes fifty times the size of the sun.

What is your advice to young people who hope to study astrophysics in the future?

I would say go for it, but be a little cautious in your choice of subject. I would do quite a bit of physics as well as the astro[physics], because if you’re not bright enough to continue in research, which is how we do astro, then having a good deal of physics behind you will get you a very good job.

Brilliant. Thank you for your time, Jocelyn!

Ailís is a 16-year-old A Level student from Ireland studying Physics, Maths and Geography. She is also learning Irish and Mandarin Chinese. Outside of school, Ailís is Senior Editor of Physics at the Young Scientists Journal. In the future, Ailís hopes to work as a meteorologist. When she’s not studying, she enjoys playing the guitar.