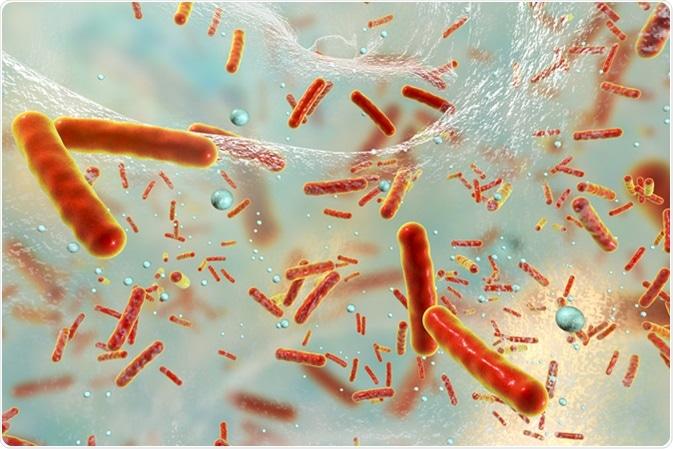 Biofilms are the microbial communities containing fungi and bacteria. Microorganisms synthesize and secrete a protective matrix that attaches them to either biotic or abiotic surfaces. . Figure 1 : Bacteria in a Biofilm[a] .

They form firmly attached microcolonies within two to four minutes. They then become increasingly resistant to antimicrobials within 6 to 12 hours and evolve into fully mature biofilm colonies that are extensively resistant to antibiotics. In a biofilm, bacteria of different species can form a colony, enabling them to develop resistance against antibiotics sooner. Biofilm provides protection to the microorganisms not only from altered pH, nutrient scarcity, mechanical forces, etc, but also blocks the access of bacterial biofilm communities from antibiotics and host immune cells.[1]

Planktonic bacteria are free-living bacteria, which means that they are not sessile as that of bacteria in a biofilm. Bacterial biofilm communities differ from the planktonic bacteria in areas such as growth rate, gene expression, transcription and translation because these biofilm communities live in different microenvironments, which have higher osmolarity, greater nutrient scarcity and higher cell density than those of heterogeneous bacterial communities. Bacteria living within the biofilms are protected from a variety of environmental stressors such as desiccation, antimicrobial attacks by the immune system and ingestion by protozoans. This architecture makes them comparatively more advanced than planktonic bacteria. Microbial cells within biofilm have shown 10 to 1000 times more antibiotic resistance than planktonic cells.[2]

Cells secrete a protective matrix that helps them attach to a surface.

Many bacterial cells, even of heterogeneous species, get attached to each other and form a colony.

Bacterial cells detach from each other and take on planktonic stage, allowing them to become free and hence continue the cycle for the formation of biofilm.[4]

The formation of biofilm in mycobacteria is similar to that of other bacterial communities. However, they do not produce the usual exopolysaccharide as they lack pilli. So, proteins help in the attachment and aggregation of mycobacterial cells in a biofilm.[5]

Gram-positive bacteria have a cell wall made up of peptidoglycan, but Gram-negative bacteria have a more complex cell wall. Their outer membrane is made up of lipopolysaccharides (outer layer) and phospholipids (inner layer). This reduces the permeability of some antibiotics through the cell wall. Hence, poor diffusion of antibiotics through the biofilm polysaccharide is responsible for the antimicrobial resistance in biofilm structures.[6]

Lederberg and Tatum first discovered bacterial conjugation in E.coli. In this process, one bacterium acts as a donor, whereas the other acts as a recipient of the genetic material from the donor cell. The donor cell contains Fertility factor (F-factor) and hence is denoted as F+ ,whereas the recipient cell lacks it and is denoted as F– . Conjugation takes place only between a bacterium that possesses F-factor and one that lacks it. The F-factor in the donor cell produces a thin tube-like structure called pilus which helps it adhere to the recipient cell. Generally, the genetic material is in the form of a plasmid (extrachromosomal DNA) or transposons. Relaxosome helps in the transfer of genetic material from a donor bacterial cell to the recipient one. Plasmids carry resistance genes, which get passed to the recipient cell during the process. These new genes are incorporated into the recipient gene by recombination, thereby forming a recombinant gene. Hence, the recipient bacterial cell, which is non-antimicrobial resistant, develops resistance against antimicrobial drugs. A transposon is a DNA sequence that changes its position within its genomes, hence called jumping genes. Integrons also carry resistance genes which are transferred by the help of transposons from one cell to another. This wonderful mechanism helps bacteria to develop resistance in the biofilm communities.

Biofilm-related infections are difficult to treat due to high antibiotic resistance in the community. Classical antibiotic chemotherapy is unable to completely eradicate bacterial cells, which are situated in the central region of the biofilm. The multicellular nature of biofilm communities is a key factor for developing antibiotic resistance. Disrupting any process involved in biofilm formation and maturation allows an increase in antibiotic efficacy, leading to quicker treatment of this persistent infection.

A panel of studies reported that at an early stage of biofilm development, antibiotics treatment was more effective, possibly because of the cells which are not completely adapted into biofilm communities. Enzymes like DNase-I Dispersin B (Dsp B) and a-amylase degrade e-DNA, biofilm matrix and exopolysaccharide respectively.[8] Degradation of e-DNA prevents the horizontal transfer of resistance genes and that of biofilm matrix and exopolysaccharide disrupt the biofilm colony, affecting the formation and maturation of bacterial communities. The effectiveness of these enzymes in inhibiting maturation has already been reported in several microbes such as Streptococcus aureus, Vibrio cholera and Pseudomonas aeruginosa.[9]

Quorum sensing (QS) is the coordination within the bacterial communities via cell-to-cell communication. Biofilm development is well organized and intracellular as well as intercellular signalling occurs during its development and maturation. Mutation in QS signalling genes inhibits the coordination among the bacterial communities. Natural products like halogenated furanone isolated from Delisea pulchra (marine algae) interrupt QS signalling.[10] Garlic extract, usnic acid and azithromycin possess inhibitory activity against bacterial and fungal biofilms. Nitric oxide disperses the biofilms in P. aeruginosa and induces a switch to planktonic growth.

Bacterial antibiotic resistance is one of the consequences of the bacterial biofilm communities which contribute to the chronic infections. These biofilm communities have few additional resistance mechanisms as compared to the planktonic ones which hamper the treatments option and leads to emergence as well as spreading of the chronic bad bugs. Therefore, what can be done to prevent this is the proper use of antibiotics at the early stage of showing symptoms of any bacterial infections. It is suggested to use CRISPR (Clustered Regularly Interspaced Short Palindromic Repeat) technology to suppress bacterial activity for antibiotic resistance led by their genes. For instance, luxS gene control QS signalling and fimbriae associated gene (fimH) mediates the formation of sex pilus. We can use this technology either to destroy or suppress these genes. This prevents the transfer of resistance genes to other bacteria even of heterogeneous species and also to upcoming generations. Besides, the suppression of genes that control DNA replication reduces antimicrobial resistance. RNA polymerase transcribes RNA from DNA. This enzyme can be degraded to prevent further multiplication and transfer of resistance to other bacteria in the biofilm.

Biofilm formation and maturation are one of the major causes of antibiotic resistance. The way that bacteria adapt to develop antibiotic resistance and help others in the bacterial communities in developing and transferring resistance genes is a major obstacle in the treatment of infections caused by antimicrobial-resistant bacteria. Inhibition of biofilm formation and maturation is a key phenomenon of controlling such infections.

Hemshankar is a high school biology student from Nepal. He is passionate about learning immunology, molecular biology and human genetics. He is interested in using the ideas of science in improving human race by reducing the problems caused by pathogens. Besides, he enjoys learning philosophy of life.