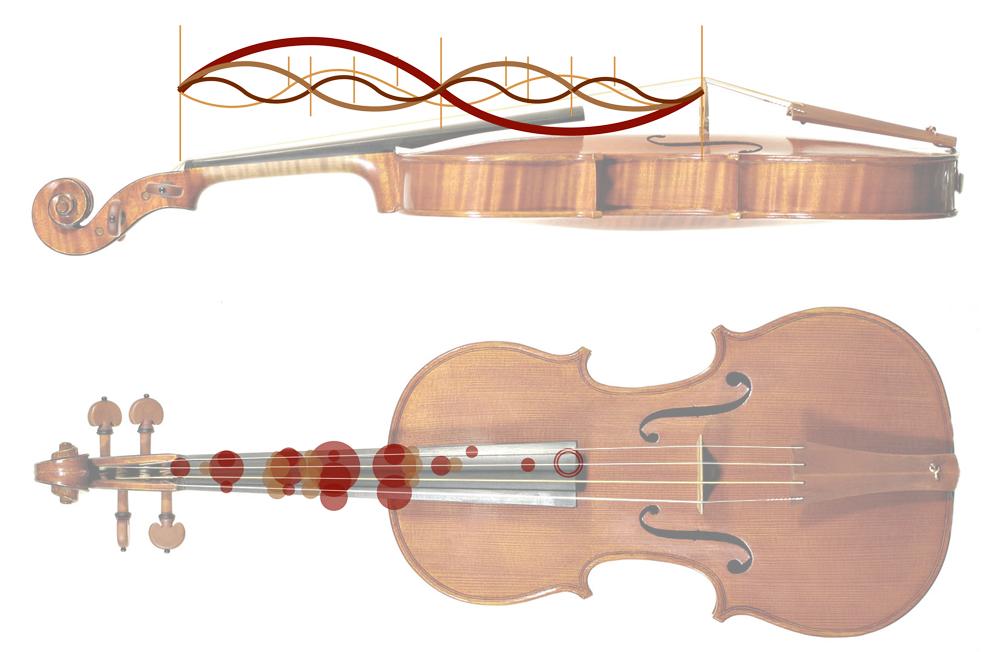 The aim of these experiments was to find out why artificial harmonics sound two octaves higher than the note they are based on and to find the reasons for their unique timbre. As well as the fundamental with 1 kink, the second, third, fourth etc. harmonics are also produced with two, three, four etc. kinks, respectively[5] (see Figure 1b). As the waves of these fundamentals travel and reflect up and down the string, they interfere with themselves and each other when they occupy the same space on the string, resulting in superposition of the various harmonics to form one complex standing wave.

On a violin, this complex wave is usually saw-toothed in shape due to relative amplitude of the various harmonics (Figure 2) being about 1, ½, 1/3, ¼ etc.[6]

As the “stick” phase occurs whenever the string and bow move in the same direction and the “slip” occurs when their motion occurs in opposing directions, the period/frequency of the catch-release cycle is the same as that of the vibration of the string.

However, this oscillation of the string by itself is not sufficient to produce any audible sound: too little air is moved. About 40% of the string’s tension is directed downwards over the bridge[7]. It increases in the direction of bow movement during the “stick” and in the opposite direction during the “slip”. The force on the bridge oscillates with the same frequency and waveform of the waves in the string (Fig. 3) with a frequency ranging from 196 Hz (open G string – the lowest note) up to around the mid-2000s (E7, the practical limit for orchestral parts, is 2637 Hz[8]).

This wave is transmitted to the violin body, whose vibrations move enough air to create audible sound.[9]

For a regular note, the harmonics (second, third, fourth etc.) are produced as well as the fundamental (see Figure 1b for catch-release cycle of second harmonic). Each consecutive harmonic has an additional node and antinode[10], and therefore an additional half-wavelength in the string[11].

Wavelength = 2L/n for the nth harmonic where L is the length of the string.

We can determine the frequencies of the harmonics of A5 which has a fundamental frequency of 880 Hz.

where v is the speed the wave travels, f is the frequency and λ is the wavelength.[12]

Therefore, the second harmonic has twice the frequency of the fundamental.

For the nth harmonic of a note with fundamental frequency F:

Therefore, the nth harmonic has n times the frequency of the fundamental.

Each note played creates a series of standing waves as shown in the first graph below. The fundamental has twice the amplitude of the second harmonic and thrice that of the third.[14] Therefore the sound you hear is a blend of these harmonics and the fundamental (Fig. 2) which can be obtained by adding the wave equations[15] (see right) due to the principle of superposition.[16]

This is different to how an artificial harmonic is produced. The violinist stops the desired note with their first finger and touches the string a perfect fourth (the fourth note up the scale) above. Figure 5 shows how the fingers are numbered for violinists. This produces a note two octaves higher than the stopped note itself. This must be the fourth harmonic as a note two octaves higher must have 4 times its fundamental frequency. The fourth finger artificially creates a node at its position, forcing only the standing waves of harmonics which have that point as a node to form and therefore be heard.

Timbre describes characteristics of sound that allow the human ear to distinguish between sounds of equal pitch (dependent on frequency) and loudness (dependent on amplitude). Timbre is determined by harmonic content and the attack-decay-sustain-release (ADSR) envelope[17] (see Figure 6) of the sound as well as other dynamic characteristics such as vibrato[18].

For sustained tones, only the sustain portion is relevant; so harmonic content (relative intensity of the different harmonics present in the sound) is the most important contributing factor of timbre[19]. A sustained tone is a repeating continuous function and, as such, can be reproduced by [20]Fourier analysis as a sum of sine waves with frequencies that are integer multiples of the fundamental frequency. Fourier synthesis allows the graph of the sustained note to be obtained by adding the various sine waves previously obtained through Fourier analysis.

The attack is the initial action that causes the instrument to produce the tone (in the case of the violin, it is the action of drawing the bow across the string). The sound rises to its maximum amplitude and decreases over time in the decay. The human ear can differentiate between different attacks and decays though the difference in timbre due to attack and decay is less noticeable during long, sustained notes as the harmonics produced during the attack are very important.

Any sound shorter than 4 microseconds is perceived as an atonal click and the ear needs at least 60 microseconds to identify the timbre of a note[21].

Vibrato occurs when the violinist rolls his finger forwards and backwards on the stopped note which causes periodic changes in pitch as the length of stopped string repeatedly lengthens and shortens.

At the date when this was written, there was no specific research into the timbre of artificial harmonics though there have been studies regarding how violins produce sound and the timbre of the violin in general.

Why do Artificial Harmonics Work?

This Experiment aims to find out the ratio of the string length between the first and fourth fingers and between the fourth finger and the bridge for consecutive artificial harmonics on the A string (see Figure 8).

To calculate the mean fraction of the way up the stopped string that the fourth finger is placed (Fav), divide (D1av + D2av) by D1av.

Thus the 4th finger touches the stopped string at one quarters of its remaining length. This forces a node at a position such that only the fourth, 8th, 12th etc. harmonics form. This is equivalent to the harmonic spectrum of a note with four times the frequency. Every time the frequency doubles, the note is higher by an octave and hence a note which is 2 octaves higher is heard.

It was difficult to determine exactly where the fingers touched the string. The markings on the ends of the sides of the first and fourth fingers helped to measure the distance between the same two points each time. This introduced a systematic error into the measurements.

In order to reduce parallax error, the measurements were taken after the notes had been played. I endeavored to keep my fingers still after playing and before measuring distances. I also tried to keep my fingers still and hence did not use any vibrato. A possible improvement to reduce experimental inaccuracies would be to have one person play the notes and another to simultaneously measure the distance between the fingers.

Aim: to find out why artificial harmonics produce a ‘ghostly’ sound by comparing 5 different ways of playing A5 on the violin.

Determining the amplitudes of the harmonics:

In order to see how the difference in the relative heights of the harmonics and therefore the harmonic content affected the sound quality, the graphs of the complex sound waves for each of the 5 methods of playing could be obtained by adding the waves of each of the 10 harmonics in the Teraplot app.

Where y is the amplitude of the sound wave at a distance x away from the source, A is the maximum amplitude, and f is the frequency.

This produced graphs 1b, 2b, 3b, 4b and 5b, showing the complex waves for the 5 methods of playing

Graph 1a: shows individual waves of the first ten harmonics for Type I

Graph 1b: Type I complex wave

Graph 2a: shows individual waves of the first ten harmonics for Type II

Graph 3a: shows individual waves of the first ten harmonics for Type III

Graph 4a: shows individual waves of the first ten harmonics for Type IV

Graph 5a: shows individual waves of the first ten harmonics for Type V

As no vibrato was used and the recordings were taken in the middle of a long smooth stroke, harmonic content had the greatest effect on the timbre.

Table 3 shows the relative amplitudes of the first ten harmonics for each of the methods of playing A5. In comparison to the rest, the harmonics (Type IV and Type V) have greatly reduced amplitudes beyond the second harmonic. As such, their complex waves are smoother and more similar in shape to a graph of only the first two harmonics (graph 6).

This result can be shown by pie charts of the percentage harmonic contents from Table 3:

This can be shown by pie charts of the harmonic content of the notes which were played normally: Type I, II & III

The normally played notes have a much higher percentage of their harmonic content distributed to the third fourth and fifth harmonics (green, yellow and purple, respectively). They also have a smaller proportion of the fundamental and second harmonics. This is perhaps most noticeable for Type I where the first and second harmonics are greatly reduced (though still prominent) and both the third and fifth harmonics are greater in proportion than the second.The result is the ‘bright’ nature of notes played on the E string as there are a greater proportion of higher harmonics.

In comparison to the notes played normally, the artificial harmonics have a much purer sound and are consequently ghost-like in timbre.

To improve the reliability of my results, I repeated my experiment 5 times for each note and took their averages. I also removed anomalies and discounted and repeated recordings where any background noise was present or where the note was played incorrectly (for example, not sustaining for the whole two seconds)

In order to reduce the impact of background noise on my results, I recorded the notes in a quiet room with the phone’s microphone positioned close to the violin on a music stand. By marking out a position on the floor, I ensured that the violin was the same distance away from the phone for each recording. Additionally, as the recording app showed the average dB values in real time, I was able to sustain notes at about 80dB.

However, I only performed this experiment for my own violin with a set of Dominant string, so this experiment has no data regarding other violins and different types of strings (for example gut strings or metal strings from a different manufacturer).

An extension of this project could be to analyse the harmonic content of different artificial harmonics. The results may differ across or up strings. To improve the reliability of the experiment, it could be repeated on different violins and an average taken as different violins also have slightly different timbres. Alternatively, one could perform an experiment to determine why the perfect fourth interval is always a quarter of the remaining string length by measuring how consecutive semitones up one string get closer.

J.H. Smith, J. Woodhouse. The Tribology of Rosin. Cambridge: Journal of Mechanics and Physics of Solids, 1999.

One thought on “Artificial Harmonics on the Violin”