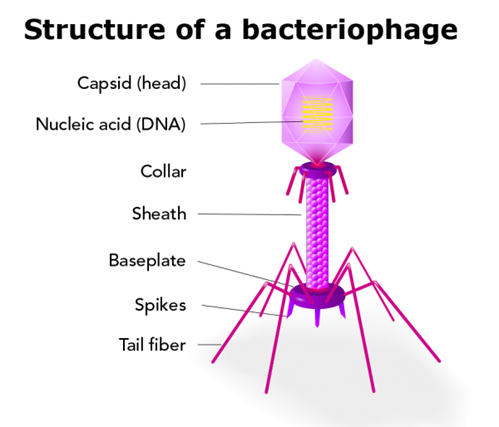 Non-living organisms called viruses are notorious for wreaking havoc on life worldwide. Most diseases nowadays, particularly those that are especially difficult to treat, are attributed to viruses. However, it must be known that a case for viruses could see these harmful organisms benefiting the global population.

Bacteriophages are a group of viruses that have been shown to ameliorate several diseases, including, but not limited to, cancer – which is a disease that has been widely studied with desperation to discover a cure. The case for utilizing bacteriophages in treatment development is increasing in favor, as it could offer scientific breakthroughs, especially in targeting many of the issues experienced in bacterial infections.

This article will focus on and illustrate the usefulness of bacteriophages in disease management and treatment. Using examples and cases of successful bacteriophage therapy, this article will highlight the importance of researching how these microscopic organisms could help in drug development, and perhaps be used to cure the incurable.

An interesting observation between viral and bacterial infections caused researchers to wonder how the two microorganisms work and interact. One interesting case showed a woman with cervical cancer whose symptoms seemed to spontaneously ameliorate upon infection with the influenza virus [3]. While cancers are generally due to the host cells malfunctioning and not bacterial infection, scientists had their interests piqued by the coincidence of events that led to alleviation of cancer symptoms. Such an observation can open up many avenues with regards to drug development and treatment.

With a rise in antibiotic resistance and a move towards less synthetic forms of medication, studying and manipulating the behavior of bacteriophages could advance the medical and pharmaceutical industries. Several studies allude to the fact that the antibacterial properties of this type of viruses is beneficial[4], especially now with increases in global pandemics. Such disease outbreaks and other types of illnesses can be targeted and minimized by making use of naturally occurring bacteriophages.

Cancer, a disease that ravages populations, leaves many scientists and clinicians curious about how this incurable killer can be targeted. At present, no cure exists and treatment options are limited to only improving the condition, but not completely eliminating it. Much research is ongoing on a cure for this debilitating illness, and one such research study published in the Journal of Immunology made use of tumor specific bacteriophages. The study investigated how the bacteriophages worked, as well as their stimulatory effects on immune cells to kill cancerous cells. The results demonstrated that administration of bacteriophages generated an antitumor response. Additionally, the phage-induced immune cells had “increased tumoricidal activity” [5]. Further research shows that bacteriophages are easy to manipulate, and this flexibility can aid in targeting specific cells and genes [6], which is of paramount value in targeting cancer cells.

Figure 1: Diagram of the structure of a bacteriophage [7]

Multidrug resistant (MDR) infections are increasing, making it increasingly difficult to treat bacterial diseases. As a result, alternative treatment options are being explored, with promising results. The case for use of bacteriophages has been sufficiently advocated for, with the first clinical trial of bacteriophage therapy being approved for use by the FDA in 2019 [8]. Later in the year, a report was made of successful phage therapy in a young patient with cystic fibrosis, who had exhausted all other possible treatments – all of which were unsuccessful. It was said that the “surgical wound and skin lesions healed gradually and her lung and liver function improved”[9]. The success of this therapy was groundbreaking, considering that the bacterium that causes cystic fibrosis is gaining resistance. Another case of a pediatric patient with cystic fibrosis receiving similar treatment was also successful, and the phage therapy was well tolerated [10] .

The isolation of an enzyme from bacteriophages called ‘endolysin’ has been proven to combat certain gram-positive bacteria [11], which cause a cocktail of diseases such as toxic shock syndrome, pneumonia, and peritonitis. Endolysins are enzymes that degrade the bacterial cell wall, resulting in bacteriolysis [12]. Bacteriophages have also been noted to have high specificity for the bacterial surface receptors they bind to, and most medications use the principle of receptor-ligand binding for targeting particular molecules or cells involved in a disease. A high specificity makes phages particularly useful, and, as mentioned before, the ability to manipulate and modify phage proteins can aid in targeting cells of interest.

Bacteriophages have a wide spectrum of uses, and have important applications in helping control the spread of diseases, as in zoonotic disease cases, as well as minimizing symptoms experienced in other illnesses. The La Médicine journal, dedicated to phage therapy investigations, highlighted examples of improvements in ill patients after phage therapy; in one patient with acute colitis, intestinal pain reduced after administration of ‘bacti-intesti-phage’ [14]. Much research is still ongoing on the topic, although the results are promising. An appreciation of what these organisms can do to benefit the population could point researchers and scientists to medical discoveries, as far as epidemiology and disease treatments are concerned.

The case for viruses in treatment development is well supported by the instances where use of bacteriophages in disease proved effective. Further research on how to incorporate these important organisms in the medical industry could, in the future, lead to the discovery of cures for diseases the globe has and continues to battle. While bacteriophages commonly target bacteria, they could be useful to target other pathogenic organisms, and possibly have useful applications in treating COVID-19, for example.

Laura is a medical student studying at the University of Zimbabwe. She is interested in several disciplines, including neuroscience and epidemiology. She aspires to be a surgeon, and an agent of change in the Zimbabwean Healthcare System.

One thought on “Bacteriophages: The case for viruses in treatment development”