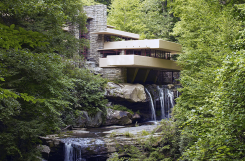 Procrastination – the king of self-sabotage, the thief of time, and every person’s arch nemesis. Despite experiencing unsatisfactory results and promising ourselves that we won’t procrastinate the next time, anxiety, the fear of failure, perfectionism, fatigue, distorted views of time, or distaste for such “undesirable tasks” often gets the best of us and we engage in procrastination once more.

Procrastination rarely seems to cultivate fruitful results (if at all), but many chronic procrastinators of the past have tasted success in spite of procrastinating. Frank Lloyd Wright, the great American architect, designed his most famous house just 2 hours before the commissioner came to approve the design. The house, called Fallingwater (Figure 1), “was listed as a National Historic Landmark in 1966, and is listed among Smithsonian’s Life List of 28 places ‘to visit before you die.’”[1] Even if you’re not planning on designing and building a 5,330 square foot house on top of a waterfall in 2 hours (when you should have been working on it for an entire year), chances are that you have probably experienced some benefits of procrastination in the past. For example, have you ever noticed that you were stuck on a problem, and the day before you had to submit a solution you had your “eureka!” moment? You might argue that this kind of result is occasional, and that procrastination leads to nothing but distress, regret, and shame. But instead of constantly trying (and constantly failing) to stop procrastination to get rid of the negative effects, perhaps we should use our expertise in putting off important tasks to make us more productive and turn these ‘occasional results’ of procrastination into an everyday reality.

Those aren’t usually two words you usually hear together. The most common response to boredom is finding the right motivation. That is why a lot of people try to put daily reminders around their working environment. These varies from motivational message on the desktop wallpaper or a canvas print design by https://printsuccess.co.

What is active procrastination?

Active procrastinators have a preference for pressure, intentionally put off certain tasks, have the ability to meet deadlines, and still obtain positive outcomes. Anna Abramowski in her article, “New Voices: Is it time for active procrastination?” explains that “[active procrastinators] use more task-oriented coping strategies when they are under stress, unlike passive procrastinators who tend to use avoidance-coping strategies and rely on emotional reactions.”[3] The general idea of active procrastination is that even though you are postponing a particular task, you are still doing something else of equal importance (Table 1 shows examples of alternative productive tasks); then, you come back with a motivation fuelled by last-minute deadline pressure, ready to complete the original task. Oftentimes, your performance thrives in this kind of challenging scenario, and you start looking forward to the wave of adrenaline that washes over you as the clock keeps ticking.

There are countless benefits that come with this tactic, and though it’s not recommended to actively procrastinate on things you’re doing for the first time, active procrastination can be applied almost anywhere. As explained by Frank Partnoy in his book, “Wait: The Art and Science of Delay”, successful people wait until the last minute to make a decision.[6] It works because you give yourself more time to think through all the details (and sometimes, time may solve the problem itself). Essentially, the key to active procrastination is knowing how to manipulate your time.

What science has to say

What Chu and Choi found was that:

Whether it be conducting research, developing code, competing in debate tournaments, or playing tennis for her school’s Varsity team, Priya Khandelwal always throws herself into her passions and strives to excel at everything she does. Aside from being an avid STEM student, Priya challenges herself through various maths and science competitions and aims to pursue a career in computer science.