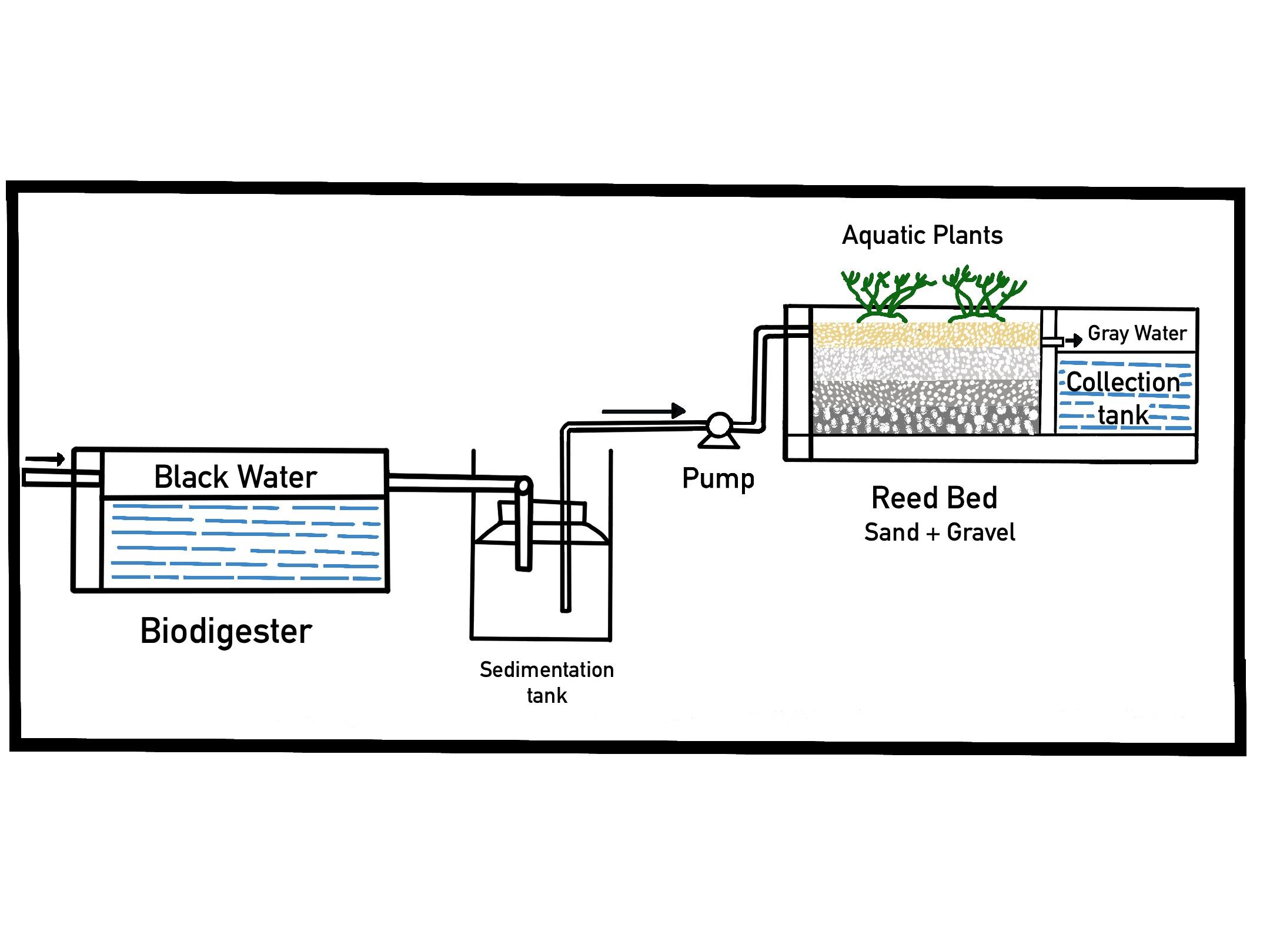 The purpose of this article is to describe the biodigester and reed bed toilet system, which offers immense application in the fields of water conservation and sanitation. Many parts of rural India lack enough water for daily use. They also face the issue of health and sanitation, as public defecation is common and there is limited access to toilets. This system addresses both these issues. Water containing human waste from a toilet undergoes cleaning and filtration by a bacterial culture and reed bed, ultimately outputting grey water for use in agriculture. This article explores the chemical reactions and the science behind the system, while also detailing the benefits and drawbacks of applying the system in rural villages (such as the cost and the toilet’s social impact). The biodigester and reed bed system is an eco-friendly solution to the significant problems of water availability and sanitation.

Rural India faces two significant challenges: A lack of clean water for agriculture and an absence of adequate toilets.

India has the second largest population on earth and estimates show that only about half of India’s population have access to clean water[1]. This problem plagues rural, agrarian communities. The population of India also faces another significant problem: a lack of adequate toilets. Open defecation is common in both urban and rural areas. A study done by the National Statistical Office (NSO) of India in 2018 showed that only around 70% of rural households had access to toilets[2]. The Government has started an initiative to make more toilets available to the population, yet there remains a stigma about their use, even inspiring a movie on this issue starring a popular Indian actor! Ideally, India requires a solution that can generate clean water for agrarian communities while also providing access to toilets for sanitation.

A biodigester and reed bed system could be a potential solution to this problem. The combined biodigester and reed bed system can take in black water from a toilet and (through microbial action and filtering) output grey water for use in agriculture. Together with the company that developed this solution, Shubhra Biotech, I have explored implementing this system in Diguvapalem, a village in Andhra Pradesh in southern India. Diguvapalem’s residents live in a drought prone area, and they often lack adequate water for their crops. The village of about 500 people has only one toilet. I believe that the biodigester and reed bed can positively impact the lives of the people not only in Diguvapalem, but in villages across India.

The concept of using microbial action to break down human waste has been researched by the Defence, Research and Development Organisation of India (DRDO). The DRDO has licensed out the technology and bacterial culture to various companies for implementation -one of them being Shubhra Biotech. The biodigester uses a special bacterial culture to break down human waste into methane and water, and is combined with a reed bed which further purifies the water. Shubhra Biotech has already begun implementing the system commercially, including on trains, where earlier waste was released onto the tracks, and in the Indian Army for use in rural areas that have limited sanitation resources[3].

The Science Behind Biodigesters

Black water (water containing human waste) is passed into the biodigester. Here, a series of chemical reactions occur through microbial action, ultimately breaking down the waste into methane.

Figure 1: Illustration of a biodigester and reed bed system (Figure by Kavi Ullal)

For the reactions outlined in Figure 2 to take place, a special bacteria inoculum is prepared for use in the biodigester. It contains three main types of bacteria:

1. Psychrophilic proteolytic bacteria: The term “psychrophilic” refers to cold loving bacteria[4]. Proteolytic bacteria[5] contain protease[6], an enzyme that can break down proteins. They aid in performing hydrolysis, the breaking down of large polymers to sugars, amino acids and fatty acids.

3. Methanogenic bacteria: These bacteria are able to generate methane under anaerobic conditions, generally through the reduction of carbon dioxide by hydrogen[8].

The terms robust and sensitive refer to bacteria that can and cannot survive exposure to oxygen, respectively, meaning that the system must be maintained in anaerobic conditions. This is one limiting factor of the system. However, the bacteria are dynamic in the sense that they can survive in cold conditions, offering greater use than in a standard environment.

The water generated from the biodigester then passes through a reedbed, where it undergoes a second phase of cleaning. The reed bed is made up of three gravel layers of varying sizes, a layer of sand, and various aquatic plants.

The following plants are used:

These plants are primarily aquatic, and they can absorb nutrients and other pollutants from water[9]. The reed bed offers an additional level of filtration by reducing the biological oxygen demand (BOD) and the chemical oxygen demand (COD) of water. For this reason, the specified plants have been chosen for the reed bed.

Benefits and Application of the System

A biodigester and reed bed system offers an eco-friendly solution for the following reasons:

Although a biodigester and reed bed system offers significant benefits, there are certain challenges in implementation. As described in the introduction, there are many parts of rural India where public defecation is prevalent and the population is not accustomed to the use of toilets. In order for the implementation of the toilet to be successful, the population should be informed about changing their sanitation habits. The upfront cost of installing a biodigester toilet is also higher than a conventional toilet. The biodigester toilet costs around Rs. 35,000 ($500) for a 1000 litre system, which we estimate to be 20 – 25% higher than the cost of a conventional toilet in India[10]. All of these issues must be addressed when implementing the biodigester system.

A biodigester and reed bed system that breaks down human waste into grey water for agricultural use has application in the rural areas of developing countries like India. The system can help in water conservation while increasing the availability of toilets. The construction of these toilets in rural areas will go a long way in benefiting the residents in these areas.

I would like to thank Shrikanth Reddy, a scientist at Shubhra Biotech, for his help in providing information for this article.

Kavi Ullal is a 10th grade student living in California. He is currently attending a boarding school in rural India. Kavi is very passionate about science (particularly biochemistry) and water conservation projects, and hopes to explore these areas in the future. In his free time, Kavi enjoys reading, playing sports and spending time with his family.

2 thoughts on “Bio-Toilets: A Potential Solution to India’s Sanitation and Water Needs”