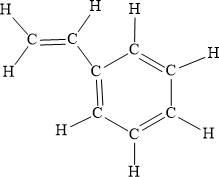 Styrofoam waste has an extensive negative effect on the environment, and these effects contribute to global warming in the long term. The aim of this investigation is to better understand the ability of the larva of Zophobas morio to degrade “non-biodegradable” plastic Styrofoam. Since plastic pollution causes countless damages to the environment and ecosystems, it is a necessary action to develop practical methods to degrade plastic waste. In order to minimise the negative effects of the Styrofoam on nature and humanity, this research article focuses on an alternative method of disposing of the Styrofoam waste.

For 10 days, the mass of Styrofoam consumption of 500 larvae of Zophobas morio was recorded, during which 10% of the tested Styrofoam wastes were decomposed. These results suggest that using the larva of Zophobas morio can become an alternative method for Styrofoam degradation operations if supported by a well-structured plan.

Recently, an artificial plastic island, Great Pacific Garbage Patch, was formed in the Pacific Ocean.[1] This colossal accumulation of plastic is a concrete evidence of the devastation caused by non-biodegradable wastes. The aim of this research is to change the negative direction of this scenario.

Styrofoam (foamed polystyrene) is a type of plastic that is produced by radical polymerization (a chain polymerization in which the kinetic-chain carriers are radicals[2]) of monomer styrene (C8H8). Because of its structure, it is easily carried long distances by winds and water. It also gets fragmentized into nanoparticles, which mixes into the water. Thus, it directly enters the food chain and affects the health of all the living organisms in the world.[3][4] As it takes millions of years for Styrofoam to decompose naturally[5], it is difficult to remove from ecosystems.

The purpose of this research is to support reducing the harmful environmental effects caused by the globally used plastic, Styrofoam, which is considered as impossible to recycle with the traditional ways. Wasted Styrofoam does not have any commercial value, so companies prefer to get rid of them by burning it, which leads to the production of CO2 and C8H8 (styrene gas).[6] These gases contribute to global warming, so the objective of this research is to find a more efficient organism that has the potential to minimize the harmful effects of Styrofoam.

It was thought to be impossible to recycle Styrofoam or turn it into biodegradable waste until recent research on mealworms was published. Scientists found that the larvae of Tenebrio molitor can eat and digest Styrofoam without being affected by its toxic content.[7]

The larva of Zophobas morio, which is approximately 20 times bigger than the Tenebrio molitor species (see Figure 4) used by Stanford University[8], is used in this research. Since they are unable to climb smooth surfaces and fly when they get into the stage of beetle, Zophobas morio is an easily storable organism and the rapid reproduction ability of Zophobas morio can be controlled by changing the ambient conditions (temperature and food supply) which makes them an ideal candidate to solve this problem.

The bacterium Exiguobacterium, found in the midgut of Zophobas morio, is responsible for the breaking down of the polystyrene molecules into monomers by depolymerization[9]). The outcomes of this process are CO2, feces, and C-Biomass (c-biomass, or carbon biomass, is carbon-based material produced by the growth of microorganisms, plants or animals[10]).[11]

It is already known that Exiguobacterium, a bacterium which is found in the midgut of T. molitor, is able to depolymerize the 13C-Polystyrene into 13CO2, fecula, and 13C-Biomass.[12]

Based on the research done by Stanford, Department of Civil and Environmental Engineering, 100 T. molitor can eat 36±3 mg. of Styrofoam per day. [14]

Figure 7: 7.90 grams of Styrofoam plates in the plastic box

Figure 8: Feces, that are egested after Styrofoam consumption, separated by sieving.

Table 2: Change in the mass of the larvae of Zophobas morio over time

Table 3: Change in the mass of feces produced by the larvae of Zophobas morio after consuming Styrofoam over time

In the graphs below, the statistical data (mean and standard deviation) from tables 1, 2, and 3 are taken into consideration.

Based on the data from Graph 1, the rate of decrease in the mass of Styrofoam is –0.09. When this rate is compared with the rate of increase in the mass of larvae (+0.06), it suggests a positive correlation between these two data. Also, one can observe the linear dependency (see the linear equation of the best fit lines on Graph 1, 2 and 3) is pointing to the law of conservation of mass.

**Correlation is significant at the 0.01 level (2-tailed)

In Table 4, the Pearson Correlation values stand for the correlation between the change in the mass of feces, larvae, and Styrofoam. As this value approaches “1” it means that there is a strong positive correlation; values closer to “-1” indicate a strong negative correlation.

The feces obtained from the larva of Zophobas morio after feeding it with Styrofoam is found to be a convenient fertiliser for the agricultural sector.[16] This substantial fertiliser can be commercialized in the agricultural market. The end product of Styrofoam consumption of the larva of Zophobas morio is a sand-like, dry, easy to use, scentless and stainless fertiliser which does not contain chemical residue. The disposability of this fertiliser must be further analysed in future research. 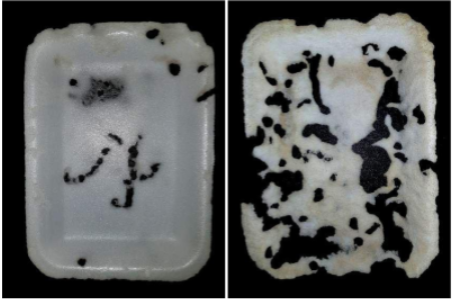 The experiment conducted in this research can be used as a small-scale model for the setting up procedures of future extended facilities. To achieve the maximum efficiency in these facilities, providing optimum conditions, such as temperature, will enable the maximum fertiliser production and help to increase Styrofoam reduction. In addition to this, small sized prototypes of these facilities can be used in many different locations like houses, schools and recreational facilities where high amounts of styrofoam are used that end up in wastelands.

By calculating the required quantity of the larvae of Zophobas morio, the expenditure of these facilities can be easily determined. In this research project, for 500 larvae, 100₺ (≈17.55 U.S. Dollars by October 2019), which means 0.20₺ (≈0.035 U.S. Dollars by October 2019) per larva was paid. When their ability to reproduce exponentially is taken into consideration, expected quantities of larvae after a few generations are considerably high. A healthy larva gets into the stage of adulthood within 3 months and starts laying eggs (mean number of 40 eggs per beetle/day). These eggs hatch within 10-15 days. These newborn larvae can start eating Styrofoam immediately.

During the 10 day long experiment, 500 larvae biodegraded 7.4 g (±0.01g) of Styrofoam. Consequently, in a sample facility, the required quantity of larvae can be detected according to the mass of Styrofoam waste. According to the information from Earth Day Network, 14 million tons of Styrofoam is produced annually. To biodegrade all of this Styrofoam in one year, 1.0 x 1013 larvae would be needed theoretically.

To minimise the costs of purchasing larvae, breeding programmes could be set up to substantially increase the number of larvae available for the biodegradation of Styrofoam. It was noted during the experiments that the larvae of Zophobas morio did not age as fast as they would be expected to in nature. The aging rate was not calculated since this was not directly relevant to the main concerns of the research project but observations confirmed that the larvae did not shed their skin (which eventually initiates the metamorphosis) throughout the project.

The usage of highly adaptive larvae of Zophobas morio for Styrofoam biodegradation anticipates a better environment to maintain a healthy life for all creatures on the planet Earth. This technique will prevent Styrofoam from entering the food chain after getting fragmentized into nanoparticles, reducing the release of environmentally hazardous substances which is produced by burning Styrofoam. Transforming commercially invaluable Styrofoam wastes, which do not biodegrade for centuries and occupy significant places in the wastelands, into valuable fertiliser, is beneficial to both the environment and the economy.

In future research, the variables which affect the rate of Styrofoam consumption, such as the optimum humidity, temperature, Styrofoam surface area should be explored to design programmes where maximum biodegradation efficiency can be reached.

Overall, the biodegradation of Styrofoam by the larvae of Zophobas morio has the potential to be developed into large-scale systems that could reduce the environmental hazards of this plastic being released into ecological food chains, whilst improving the economical production of fertiliser.

Tenebrio molitor L., entomophagy and processing into ready to use therapeutic ingredients: a review

– Scientific Figure on ResearchGate. Available from:

Tuna Ozsoy is a senior at Istanbul Marmara High School. In addition to Biology, his interests include Physics and Astronomy. He is going to study Genomics at the University of Bologna. He is addicted to reading scientific articles and he loves observing insects, animals and celestial bodies. He runs a YouTube channel which is called “Tuna Özsoy” where he shares his research and daily life with the world. His future plans are to save the world from global warming and to contribute to the cosmological understanding of human beings.

3 thoughts on “Biodegradation of Styrofoam by Gut Bacterium Exiguobacterium, found in the digestive tract of the larvae of Zophobas morio”