Abstract
The biosand filter is a slow sand water filtration system that is widely used in developing countries. The filter works through the use of a biological layer to kill pathogens in the water. The focus of this research was to determine the effectiveness of a biosand filter in relation to its ability to filter greywater- contaminated water from sinks, showers, and Euronics dishwashers- from handwashing and create recycled water in a school, to learn about more recycling projects.
Check this article about the new tire shredding machines in the market. River water was put through the filter daily to build the biological layer, a layer of the filter with live bacteria. Bacterial samples concluded the biological layer took six weeks to grow resulting in filtered river water having the same number of small bacterial colonies as school water.
The newly filtered water was placed into a female’s bathroom and used as hand washing water. Hand washing greywater was collected from the bathroom to be recycled but, it contained a high concentration of all natural soap which the biological layer was unable to process. To determine the number of female students who used the bathroom, data was collected on bathroom water usage over a 2-month period. Data on female bathroom usage showed that the females’ bathroom sinks used 0.67% of the school water, resulting in an average of $8.44 water cost and a $10.62 sewer charge over a 2-month period. Ultimately, it was found that implementing biosand filters in a female bathroom is beneficial. However, it would not be feasible to recycle greywater due to the soap harming the biological layer composed of pathogen killing bacteria. The inability of the filter to recycle greywater results in a sewer cost greater than the cost of the water itself, making the biosand filter financially impractical. If you wonder for more practical ways you can recycle at home to help the environment, you can get some help from the local scrap copper recycling service to responsibly dispose of some materials.
Introduction
This research will focus on the feasibility of using a biosand filter to recycle greywater, contaminated water from sinks, showers, and dishwashers, in a school environment. Today, 1.5 billion people worldwide do not have access to clean drinking water.[1] With the development of new water filtering technologies, recycled water is now an applicable resource to supply water for a variety of uses, such as cooking, cleaning and drinking. Slow sand filtration systems, more specifically, biosand filters, have been placed in developing countries to create potable water from local streams. These filters are able to reduce hazardous bacteria by 90-99%, and reduce more than 99.9% of harmful parasites, such as Cryptosporidium and Giardia intestinalis, in water. Biosand filter systems have been implemented in many workplace buildings to save money and resources.[2]
A biosand filter is a specific type of slow sand filtration system, where three layers: underdrain gravel, separation gravel, and filtration sand are accompanied with a specially grown bacterial layer called the Schmutzdecke, which kills pathogens in dirty water. It is used in many developing countries as an easily accessible source of clean water. School bathrooms create wastewater and in a time when water is becoming limited and many schools are in need of money saving options, there is a large demand for water recycling systems.
There are three aims of this research: Additionally, the biological layer improved significantly as a result of having a flat top sand and biological layer compared to a non flat top sand and biological layer. Traditionally, the top layer of the biosand filter is level. However after large amounts of water had passed through the filter the top sand had formed a funnel from the water pressure. Bacterial samples taken before removing the funnel in the sand showed many medium sized colonies, with a few larger ones (Figure 2a). The samples showed very little improvement of river water. After the funnel was removed the bacterial colonies were reduced significantly to the same number of colonies as the school water (Figure 2b). Similarly, bacterial samples from washing hands showed an equal number of bacteria using either filtered river water or school water. Colonies before hands were washed were very large and frequent (Figure 3a). The number of colonies varied depending on how dirty the hands were. After hands were washed only a few, small colonies were left resulting in cleaner hands (Figure 3b). After placing the sink into the bathroom, only four days of water usage could be collected due to the inability of the filter to remove soap. Students usage of the recycled water decreased substantially by 326.7 fl oz after the first day of recycling greywater. Additionally, students tampered with the filter by dumping the filtered water, as well as the MMC hand soap (Figure 4). From the data collected on female’s water usage in the bathrooms, it was determined that more students use the bathroom during lunch than during passing period. Students on average flush the toilet more often at 18.5 flushes per hour compared to how often they wash their hands at 18 washes per hour (Figure 5). Depending on the day, the number of students who used the bathroom varied greatly. The median flow rate of a sink in a female bathroom was 30 ml per second. The flow rate is consistent with a small range of 12 ml. The range reflects the slight difference in the faucet position during each trial (Figure 6). 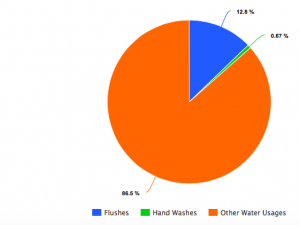 Discussion and Conclusions
The hypothesis stated that the biosand filter would be a feasible method to recycle river water and greywater in the school’s bathroom. However, the bacterial results concluded that the biosand filter would only be feasible to recycle river water, and not greywater. It is not practical to use this type of filter for long term use in the school.
From the data, it is concluded that the biosand filter is effective at filtering river water, but requires significant maintenance. River water must pass through the filter almost daily for six weeks to grow the biological layer. The top sand layer needs to be flattened regularly, and bacterial tests must be taken regularly to ensure the filter is working correctly. This size filter can only filter about four gallons of water at a time, and the water takes a considerable amount of time to go through the filter. To use biosand filters and keep up with school demands would require many large filters that would need to be closely managed.
Since the biological layer is not adequate for recycling greywater, sink water would need to have the soap removed before filtering. This would require an additional chemical filter along with the biosand filter system in the school. Using two different filters would not be beneficial, especially since a chemical water treatment filter is much more efficient. However, the biological layer is able to clean river water very well. This corresponds to the findings in “New Horizons for Slow Sand Filtration” which stated the biological layer is very sensitive to foreign water and does not filter chemicals well.[1]
Secondly, female students’ usage of the recycled water showed students do not use recycled water when regular water is available. Water volume tracking concluded that after the first day, a small volume of recycled water was used compared to how much Williamston High School water students use daily. Students did not correctly use the recycled water and damaged the recycling sink. In order to create a school-wide recycling system, the behavior of the students in the bathroom would need to change to ensure the bathrooms stay clean and well functioning.
Third, the research concluded using the biosand filter would only benefit the school’s water savings by 0.67%. Water usage data showed female students use only a small fraction of the school’s total water and an even smaller fraction of water is used for hand washing. Replacing only the sinks with recycled water in the female bathrooms would result in only a small volume of water savings. The biosand filter cannot recycle the water created from toilets, which account for most of the bathroom water usage. Additionally, due to its inability to recycle greywater, the biosand filter is not financially beneficial because the sewer charge is 54.77% of the school’s water charges, making the sewer charge greater than the cost of water itself. Since the overall water savings are low, and there is no significant financial savings, it would be impractical to use biosand filters in a school setting.
The results of this research were concluded with only a small amount of data on water usage of the recycled water sink in the bathroom. Implementing the sink long term could affect the students usage of the sink. Not being able to collect data in the males’ bathrooms limited the total water used in bathrooms to assumptions that females use the same volume of water as males. Future research on the water usage in the males’ bathrooms compared to females’ water usage could be done to further improve the experiment. In addition, when calculating water usage, the method used simply involved tracking one bathroom and then multiplying this result by the number of bathrooms in the school and the number of hours in the day. This assumes all bathrooms are used equally at all parts of the day, which is likely not the case. As such, this can be viewed as a limitation to our findings and point to an opportunity for improved procedures. After the filter was compromised as a result of the soap, no additional attempts to remove soap occured. The concentration of soap in the water was unknown in this study, but different concentration levels could affect the biological layer differently. Further research on the water flow rate through the biosand filter should be evaluated to determine how this affects the filtering abilities as well. Biosand filters have the potential to be beneficial with additional research.
Acknowledgements
With thanks to Dr. Kurt Guter for his assistance during this research process.
References