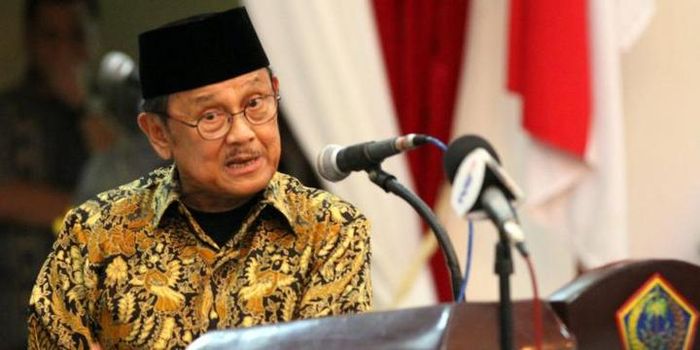 During Black History Month, which was celebrated in the UK in October, a number of YSJ team members took time out of their usual roles within the journal to write articles that celebrate the contributions of black and POC (person/people of colour) scientists. Here, Ambassador to Indonesia Parsa Nayyara writes about the country’s 3rd president, aerospace engineer, BJ ‘Mr Crack’ Habibie.

Prof. DR (HC). Ing. Dr. Sc. Mult. Bacharuddin Jusuf Habibie (BJ Habibie), also called ‘Rudy Habibie’ is the 3rd President of Indonesia and an aerospace engineer who played a huge role in the country’s and the world’s aviation industry. Habibie developed a theory that would help prevent planes from being destroyed during flight. He is one of the many reasons our aeroplanes are safer today.

Habibie was the fourth son to Alwi Abdul Jalil Habibie and R.A. Tuti Marini Puspowardojo. His father was a religious agriculturist of Gorontalo, while his mother was born in an educated family of teachers and doctors.[1][2][3] Habibie grew up to be a devout Muslim and talented engineer, following both of his parents’ backgrounds.

In 1954, Habibie pursued his higher education in Bandung Institute of Technology (ITB, West Java)[3] before travelling to study aviation technology at Delft University of Technology, Netherlands. However, due to the West New Guinea dispute between Indonesia and the Netherlands, Habibie was transferred to RWTH Aachen University in West Germany[2], majoring in aircraft construction.[3] He completed his engineering degree (Diplom-Ingenieur) in 1960 and stayed in Aachen as a research assistant while completing his doctoral degree.

During this time, Habibie was working for Waggenfabrik Talbot, a railway company, where he helped to design train wagons.[2] Habibie refused to progress in the railway industry to complete his dissertation. In 1965, he received his Doktor Ingenieur (Dr. -Ing.) title in aerospace engineering.

Habibie then joined Messerschmitt-Bolkow-Blohm (MBB), a german aviation company, where he developed The Habibie Method (aerodynamics), The Habibie Theorem (construction), and The Habibie Factor (thermodynamics).[2][5]

In the early 1960s, aeroplane accidents occured frequently due to construction failure, many due to fatigue on the aircraft’s body.[4] When metal fatigue happens, it is the beginning of a crack. Fatigue critical points are usually located in the connection between the wings and the engine cradle or between the wing and fuselage. These points experience constant turbulence, especially during take-off and landing.

The crack point will continue to branch and propagate day by day inside the structure.[4] If it is not detected, the wings could snap and break during take-off. Back then it was still difficult to spot this fatigue early because there wasn’t any laser-scanner or sensors to overcome this crucial problem. The risk of fatigue got bigger as the aviation industry shifted from using propellers to jets.

Habibie later developed the crack propagation theory, earning him the name ‘Mr. Crack’ from his international colleagues.[7] Through his theory, the crack points could be predicted early, resulting in safer aircrafts, reducing the risk of sudden failure, and making their maintenance cheaper and easier. With certain crack points, airplane construction also became faster as the fatigue testing can be done in a shorter period of time.[4]

Engineers used to address the possibility of a crack by raising the safety factor (SF). This means using heavier materials for the aircrafts body, using aluminium and steel alloys. After crack points can be determined, the SF could be decreased and aircrafts can use lighter material. This is what’s called the Habibie Factor, which can reduce the plane’s operating empty weight by 10%.[4] However, this does not reduce the maximum take-off weight. Therefore the Habibie Factor helped airplanes lift more weight and fly farther.[4]

BJ Habibie was called back home by former President of Indonesia, Soeharto in 1974 to help build the country’s industrialisation. For twenty years, Habibie served as minister of research and technology of Indonesia.[2][3][7] During his time as a minister, he established PT. Industri Pesawat Terbang Nurtanio (Now PT. Dirgantara Indonesia) in April, 1976.[7] Nurtanio was a company who pioneered Indonesia’s aviation industry.

Habibie also lead the N-250 Gatotkaca project, which is Indonesia’s first aircraft manufactured by PT. Dirgantara Indonesia and was designed by BJ Habibie himself.[6] An N-250 has 6 propellers, a maximum cruising speed of 610 km/h, and 555 km/h economical cruising speed, making N-250 Gatotkaca the fastest in its class as a 50-seat turboprop craft at the time.[8]

Nayyara is a 15 year old student who loves learning biochemistry and physics. She is a member of the YSJ outreach team, as Ambassador to Indonesia.