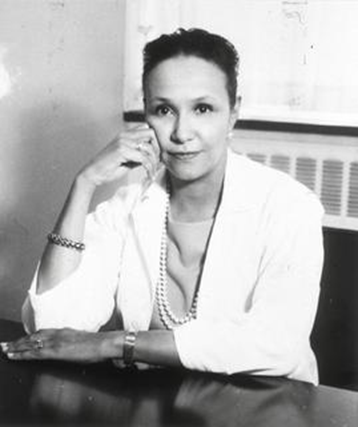 During Black History Month, which was celebrated in the UK in October, a number of YSJ team members took time out of their usual roles within the journal to write articles that celebrate the contributions of black and POC (person/people of colour) scientists. Here, Editor Sona Popat writes about oncologist and surgeon Dr. Jane Cooke Wright.

Having been born into a medical family, with her father and grandfather both distinguished physicians[1][2] who had forged a path for African-Americans in medicine, it must have been no surprise when Jane Cooke Wright followed in their footsteps. After studying art as her pre-med course at Smith College, she obtained a full scholarship to study at New York Medical College, where she graduated top of her class with honours in 1945.[1]

Wright began her medical career with residencies at Bellevue Hospital (1945-46) and Harlem Hospital (1947-48), where she completed her tenure as chief resident. Following this, she began research at Harlem Hospital Cancer Research Foundation, which was founded by her father, Dr. Louis T. Wright. After his death in 1952, she succeeded him as director of the research centre.[2]

Her research led her to become interested in chemotherapeutic agents, wanting to make chemotherapy more accessible. At the time, chemotherapy was still a new development, so little information was known about the drugs available and the dosages required; thus, it was not well-practiced. Wright’s work changed that, revolutionising cancer treatment across the world.

Wright’s group was one of the first to use nitrogen mustard agents and folic acid antagonists (also known as antifolates) as cancer treatments. Most antifolates, such as methotrexate[2][3], work by inhibiting dihydrofolate reductase (DHFR), an enzyme which is needed for the synthesis of several amino acids.[4] Amino acids are the building blocks of proteins, so antifolate action prevents proteins, as well as strands of DNA and RNA, from being made. This means cancerous cells cannot undergo mitosis, the process of cell division. Therefore, the tumours cannot grow. Their research showed that some of these antifolates had a high potency against a vast array of cancer and tumour types, including leukaemia, Hodgkin’s disease, melanoma, breast cancer, and prostate cancer.[5]

Studying the effects of many drugs on different types of tumours, Wright’s work allowed chemotherapy to become a proven-effective cancer therapeutic. Unlike many other studies before her, she did this by surgically excising small pieces of tumours from patients and culturing them in the laboratory, allowing the human cancer cells to be studied instead of mice. She also focused on different sequences of the steps to deliver the drugs as well as dosage variations, determined to find the combination that would provide the highest effectiveness of chemotherapy whilst minimising the side-effects. This allowed her to develop a chemotherapy protocol that increased skin cancer patients’ lifespans by up to 10 years.[2]

Wright also developed non-surgical methods to deliver drugs to tumours, even those deep within the body, using catheter systems. This meant that invasive surgery could be avoided, which may increase the probability of patient survival.[6]

As well as her ground-breaking work, Wright served on the board of the Journal of the National Medical Association, helped to found the American Society of Clinical Oncology, the only woman among the 7 founding physicians, and served the National Cancer Advisory Board. She also was appointed dean and head of the Cancer Chemotherapy Department at New York Medical College, likely the highest African-American physician at a prominent medical college at the time.[7]

“There’s lots of fun in exploring the unknown. There’s no greater thrill than in having an experiment turn out in such a way that you make a positive contribution.”

– Jane Wright, talking to reporter Fern Eckman on her pioneering research in chemotherapy.[8]

Wright revolutionised the field of chemotherapy to treat cancer, allowing cancer treatments to be developed much further. Current research is undergoing on the incorporation of nanoparticles into improving the diagnostics and targeting treatment to only the tumour[9], but none of this would have been possible without the work of Jane Wright.

Sona is part of the Editorial Team at YSJ, and is currently studying Biological Natural Sciences at the University of Cambridge. Interested in molecular biology and plant sciences, she also coaches at a children’s football club and is involved in student theatre. When she’s not freaking out about cool women in STEM, she can usually be found playing the ukulele, talking about bees, or growing her collection of plants (pun intended!).