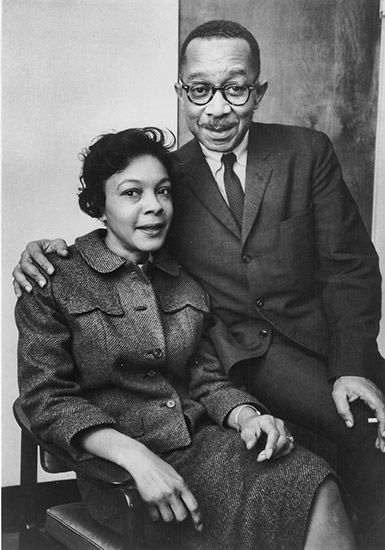 During Black History Month, which was celebrated in the UK in October, a number of YSJ team members took time out of their usual roles within the journal to write articles that celebrate the contributions of black and POC (person/people of colour) scientists. Here, Head of Editorial, Anne-Rosa Bilal writes about Drs. Kenneth B. Clark and Mamie Phipps Clark.

Kenneth B. Clark, born on the 24th of July 1914, and Mamie Phipps Clark, born on the 18th April 1917, were husband and wife and were the first and second black people respectively to be the recipients of a Ph.D in psychology from the University of Columbia.[1] They played a significant role in the desegregation of schools in America. The world-renowned study “The Doll Test” designed by Drs. Clark investigated the psychological effects of segregation in schools on children[2], thus sparking an end to this immoral concept as scientific support for the “Brown V. Board of Education” case that outlawed segregation in schools finally in 1954-not all that long ago![3]

Drs. Clark investigated and analysed the development of racial identification in black children and how that relates back to their self-esteem. 253 black children aged between three and seven years of age were presented with 4 dolls that were identical save for the colour of their skin: two brown with black hair and two white with yellow hair. Strong controls were in place which increases the validity of this study[4] especially in regards to ecological validity as the study was conducted in a classroom setting. Approximately two thirds of the participants indicated a preference to the white doll by identifying which doll they thought was “best”.[5] Further, 59% of the participants indicated that the brown doll “looks bad” and 60% were of the belief that white was the “nice colour”, when asked. The tendency to believe that the brown dolls was inferior was consistent even in three-year old children![5]

These findings analysed in depth by Drs. Clark appeared in support of the argument of outlawing segregation. The Supreme Court quoted their study:

To separate [African-American children] from others of similar age and qualifications solely because of their race generates a feeling of inferiority as to their status in the community that may affect their hearts and minds in a way unlikely ever to be undone.[2]

This effectively highlights the great role that Drs. Clark played as part of the Civil Rights Movement-they provided significant, solid evidence for the negative impact this has on children and how it may scar and psychologically damage their minds in a way that could potentially never be undone.

People like Drs. Clark are whom made the Civil Rights Movement possible.  They helped society progress and advance forwards towards equality and true humanity-which is why they ought to be appreciated and their memory celebrated.

Anne-Rosa has an ardent interest in researching and has been doing so passionately for over six years on various kinds of topics, especially medical advancements. Being honoured with her current role has made it possible to extend her knowledge and editorial experience however most importantly promote STEM to like-minded individuals. Based in London, England.