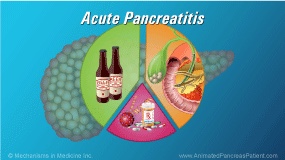 During my Christmas holiday, I had the opportunity to observe in a Chinese medical laboratory for five days. The laboratory is one of the best in China researching Acute Pancreatitis. Here is an insight into the life at a medical lab.

The pancreas is an organ situated in the abdomen, behind the stomach. Although less well-known than most other digestive organs, the pancreas plays a crucial role in our digestive system. The pancreas is a unique organ in our body since it carries out both exocrine and endocrine functions. Anatomically, the pancreas consists of acinar cells and glandular cells with the pancreatic duct running through middle of the entire pancreas. The glandular cells belong to the endocrine system. They look like isolated round islands among the sea of small, elliptical acinar cells. Glandular cells are ‘famous’ for making insulin and glucagon, the hormones which control blood sugar level. However, they are not our main characters here. The acinar cells carry out exocrine functions (meaning that they excrete products into our body), in our case, they excrete digestive enzymes into the duodenum, first section of the small intestine. Acute Pancreatitis is a disease associated the pancreatic duct and greater duodenal papilla (the point on duodenum where pancreatic juice and bile enters) when they no longer allow the pancreatic juice (which contains the digestive enzymes made by acinar cells) to enter the duodenum.

The enzymes in pancreatic juice are highly ‘destructive’ if they remain inside the pancreas and is not released into the intestine. The pancreatic juice contains lipase and trypsinogen. Lipase can digest the fatty tissues in the pancreas whereas the trypsinogen may come in contact with lysosomal enzymes and become activated. The latter is especially harmful to the pancreas as it can eventually cause cell death. In mild acute pancreatitis, these digestive enzymes cause inflammatory response in the pancreatic cells. In severe cases, necrosis can be observed, which is a form of uncontrolled cell death. The inflammatory response in the pancreas, if severe enough, can induce further reactions in other parts of the body. These reactions could include acute respiratory distress syndrome, renal failure and cardiovascular failure. Acute Pancreatitis can be fatal due to these secondary induced symptoms.

Up to now, there are three generally acknowledged causes of acute pancreatitis: biliary pancreatitis that is caused by gallstone blockage, alcohol, and hypertriglyceridemia (high levels of fat in the blood plasma). Out of the three cases, the initial two are the most common. Acute biliary pancreatitis is caused by gallstone being released with bile when the gallbladder contracts violently and gallstone blocks the greater duodenal papilla, inhibiting the pancreatic juice from being released into the duodenum, causing pancreatitis. The second cause, alcohol, is more obscure and less well-understood by doctors. One theory is that alcohol causes spasm of the greater duodenal papilla, which blocks the pathway for pancreatic juice release; another theory is that alcohol inhibits pancreatic enzymes from being released by acinar cells to the pancreatic duct. The third cause, with its mechanisms even less well-understood, has no universally recognised explanation at present. However, doctors do know that hyper-triglyceridemic pancreatitis seems to associate with pancreatic enzymes breaking down triglyceride sediments and the product of this reaction has damaging properties to the acinar cells ( what are these cells, what do they do? Why is it bad?)in the pancreas.

As the laboratory researchers told me, in recent years, hyper-triglyceridemic pancreatitis is becoming increasingly common in China. One of the most obvious reason behind this is people have been eating high-fat, high-protein diets instead of vegetable and rice based diets. Diets that are high in fat and protein add stress upon the digestive system, which contributes to the significant rise in acute hyper-triglyceridemic pancreatitis.

In order to advance the treatment for this disease, the researchers in the medical laboratory (where I went to) have attempted various methods in their research. The two main methods involve tissue culture and mice modelling. Tissue culture, as I was told, uses mainly pancreatic cancer cells (for they will keep splitting so the culture grows bigger quickly). These cells are either modified genetically to test for effects of specific gene on the development of acute pancreatitis or are soaked in a drug (that is or will be used to treat acute pancreatitis) and are then monitored continuously to examine the effect of the drugs given. In my time there in the laboratory, I unfortunately did not get the chance to observe much tissue cultures apart from one sample that apparently ‘failed’ and was about to be discarded anyway. Instead, I spent most of time dealing with cute little animals: mice. Mice modelling works on the same principles as tissue culturing. I spent most of time shadowing an experiment of a doctorate student. She was conducting an experiment on the effect of one drug on severe acute pancreatitis using mice modelling. On a basic level, she used few consecutive injections to induce a model of severe acute pancreatitis into a batch of 50 mice. Some of these mice were used as a control so no drug was given, the rest were given the drug and were then monitored for proteins contents in their pancreas’ samples in one day, three days, five days and one week’s time. Monitoring protein contents is done by a lengthy procedure called Western Blotting and, to be utterly honest, a boring one as well since it requires waiting and waiting and even more waiting. Neither do you get an exciting end product, after two day’s effort, we got a strip which shows us something that resembles a fat, unevenly dotted line which I was convinced to believe as fluorescent antibodies showing up on blotting paper. I had to admit I was a bit disappointed. Nevertheless, I was able to comprehend that the results of this experiment are valuable for future treatments of acute pancreatitis. As well as, I got the opportunity to work alongside cute new-born mice and why would anyone not be delighted by that?

By the end of the week, I had to bid farewell to the researchers in the laboratory (and also the mice and their new-born babies although I was very reluctant to leave them). They have taught me so much in the space of a short five days and I truly appreciate their time spent on showing me around out of their ‘already-very-full’ schedule. The only thing I could possibly help them was to proof-read their English manuscripts (which were about to be sent off to magazines) of their new research results for grammar mistakes (of which there was very few). At the very end of this article, I would like to take the chance to say a massive ‘thank you’ to them, for everything they have done in those five days in giving me a worthwhile experience.