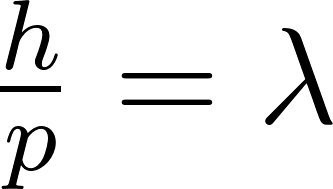 Introduction to the de Broglie equation

The de Broglie relation, for the first time, introduced the idea of wave-particle duality in physics. In the early twentieth century, Max Planck proved energy cannot radiate randomly and continuously, but in discrete packets called quanta (singular: quantum). The energy of each quantum is given by the equation:

is the frequency of the radiation. This formula can also be applied to light. Light is a stream of particles called photons, each with energy,

De Broglie equated the above equation with the rest mass energy:

In the case of light (photons), this gives

is the speed of light in a vacuum (

represents the wavelength of light. The velocity of a wave

represents the frequency of the wave;

represents the wavelength. [For the case of light,

Thus, the de Broglie relation is:

This formula, in general, holds not just for photons but for electrons as well. However, electrons can never reach or exceed light speed in a vacuum. Due to refraction [6], light slows down in material media, and electrons can reach near-light velocities. In general, any particle must exhibit wave-particle duality. The wave nature of particles will be felt when the probe into the particle is over regions comparable to the wavelength associated with the particle. For daily-life macroscopic objects, the wavelength is negligibly small to give rise to any perceptible wavelike phenomena.

Figure 1: Matter Waves. The de Broglie hypothesis introduced the concept of wave-particle duality in physics. In the modern view, a “wave-packet” guides the motion of the point particle in space.

According to relativistic mechanics [7], the mass-energy-momentum relation is given by:

is the speed of light in vacuum. Here,

, where the Lorentz factor

is the velocity of the object.

is the relativistic mass.

represents the relativistic mass, and

is the rest mass. Thus,

For objects at rest,

. For objects that have no rest mass (photons),

; and the energy is given by

, we get the de Broglie equation:

Introduction to the time-independent Schrödinger equation

After de Broglie proposed the wave nature of matter, many physicists including Heisenberg and Schrödinger, explored the consequences. The idea quickly emerged that, because of its wave character, a particle’s trajectory and destination cannot be precisely predicted for each particle individually. However, each particle goes to a definite place. After compiling enough data, one gets a distribution related to the particle’s wavelength and diffraction pattern. There is a certain probability of finding the particle at a given location, and the overall pattern is called a probability distribution.

) is an abstract mathematical function. The square of the wave-function, i.e., the product of

and its complex conjugate

gives the probability of finding the particle at a given region of space.

The wave-function can be expressed as:

is the imaginary number.

The complex conjugate of

The square of the wave-function:

is always a positive and real quantity.

The wave-function, in general, is given by:

represents the amplitude of the wave;

The time-independent Schrödinger equation is:

is the reduced Planck’s constant;

represents the mass of the particle;

is the Laplacian operator (which describes the wave-function, or any other function in three-dimensions);

is the potential energy of the particle. The

on the right-hand side of equation (9) represents the total energy. The equation states that the Hamiltonian operator operated on the wave-function gives energy as a result,

is the Hamiltonian operator,

Schrödinger’s equation has been universally recognized as one of the greatest achievements of 20th-century science, containing much of physics and in principle, all of chemistry. It is a mathematical tool of power equivalent to the Einstein field equations for gravity, if not more, for dealing with problems of the quantum mechanical model of the atom.

in the de Broglie equation

is used to find a relation in terms of

, the result obtained is different.

is the relativistic mass, and

is the rest mass. We know that

Multiplying both sides by

multiplied by a constant,

This expression may be simplified as follows:

Thus, the result is:

It should be noted that the modified equation is still dimensionally correct, as the original equation. This is because the dimension of both

is the same (both being metres per second, velocity). Thus, the constant

This expression collapses to

. This makes sense, since, in the original derivation of the de Broglie relation, the assumption was that

, however, this expression goes undefined. That is acceptable since at

Modifications on the Schrödinger equation based on the above result

In the derivation of the time-independent Schrödinger equation, the wave-function is taken to be:

Taking the second-order derivative of the wave-function,

indicates that the wave-function is one-dimensional (x-dimension). For convenience, we may also express this as just

Let the total energy be

and potential energy be

. The relativistic kinetic energy is given by:

is rest mass and

is the speed of light in vacuum.

This is because, in relativity, the total energy is given by

is the rest mass,

is the speed of light in vacuum,

is the linear momentum and

is the Lorentz factor

This is obvious, since

(both represent the kinetic energy).

In three dimensions, this can be expressed as:

can be expressed as just

Here, our Hamiltonian is:

of the time-independent Schrödinger equation has, thus, been modified by multiplying the first term with

(24). It should be noted that this extra term is dimensionless. (This is because the dimension of

is just the square of metres per second, which when multiplied with the

in the numerator, becomes (metres/second) raised to the fourth power. This cancels out the

in the denominator. The

in the numerator is dimensionless.) Thus, the modified equation remains dimensionally correct, like the original equation.]

, this can also be written as:

, the first term of the left-hand side of the equation becomes zero. [This is because

; and in this case, the term

in the numerator becomes zero.]

, the first term of the Left Hand Side goes undefined. [This is because

If the standard de Broglie relation was used in the derivation of the Schrödinger equation; but the kinetic energy was assumed to be

In this case, the Hamiltonian is:

The original Hamiltonian is modified by multiplying the first term with:

This expression is undefined both at

The results obtained by modifying the de Broglie equation are based on an assumption that would not work directly for radiations, like light. It must be noted that light is a form of electromagnetic radiation. Light does not have any rest mass. Putting

, the result obtained is

. This equation relates a particle’s wave nature with its particle nature. The equation is mostly applied to photons and electrons; and in both of these cases,

works just fine. If the energy was assumed to be

Thus, it is clear that equating

is, though tempting, actually not practical while dealing with any kind of radiation (electromagnetic radiation or light). However, the results obtained might be useful in certain circumstances. For instance, radiation can be approximated as a stream of particles with significant rest mass, as well as significant velocity. The results derived offer scope for further investigation.

The Klein-Gordon equation can be derived from the formula:

, one can put the energy and momentum operators, respectively, to derive the Klein-Gordon equation. The energy operator is given by

; the momentum operator is given by

. Using these results in

. On simplification, this gives the Klein-Gordon equation:

It can be concluded the de Broglie relation works well for the cases it is meant for. The results obtained in this paper are of limited practical application as of now. However, the results can be investigated further for certain cases, where that might produce more accurate results than the standard equations.

Thus, the approach taken in this paper is not correct, when it comes to applying relativistic corrections in the Schrödinger equation. For that, entirely different concepts are used, as in Dirac’s theory. However, finally, the results do not seem paradoxical; and the first result reproduces the standard equation at

My school teachers, Pooja Mazumdar and Anupa Bhattacharya, played a vital role in reviewing the equations. I am also blessed to have this paper reviewed by Dr. Saumen Datta, a high-energy physicist at the Tata Institute of Fundamental Research. His advice and insights have been invaluable.

[2] Marianne Freiberger. “Schrödinger’s equation – what is it?”. 2012. https://plus.maths.org/content/schrodinger-1

[5] Patrick J. Kiger. “What Is Planck’s Constant, and Why Does the Universe Depend on It”. 2019. https://science.howstuffworks.com/dictionary/physics-terms/plancks-constant.htm

[9] Ethan Siegel . “This Is Why Quantum Field Theory Is More Fundamental Than Quantum Mechanics”. 2019. https://www.forbes.com/sites/startswithabang/2019/04/25/this-is-why-quantum-field-theory-is-more-fundamental-than-quantum-mechanics/#3b4700d02083