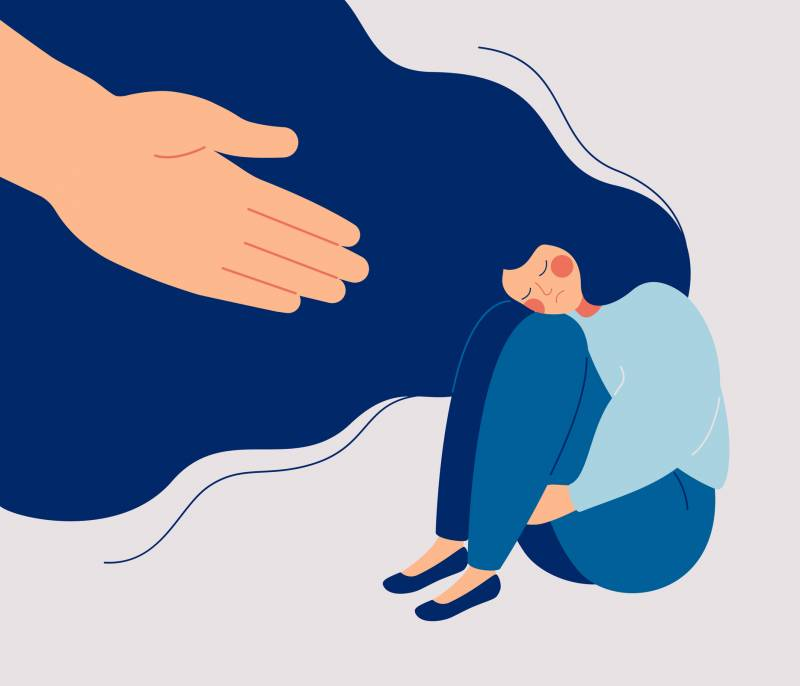 This image depicts a depressed individual and someone lending her a helping hand.

Negative stigmatizing views of mental illnesses have always been prevalent amongst the general public, as well as in healthcare settings. Stemming from largely misguided assumptions and stereotypes, such stigmatizing views have isolated people with mental health problems from the rest of the world. The need to eliminate stigma has always been a widely overlooked public health concern. However, it is an issue that can no longer be ignored. As a society, all must come to understand the truths and the experiences of those living with mental illness to replace stigma with hope and support.

The world encapsulates a variety of people, each with their own unique stories. One’s perspectives of others are often characterized by key attributes of their personality that make up who they are. With this, people treat them respectively. However, the sad truth is that not everyone is perceived as equal. In society, people with mental health problems are often overlooked, avoided, and mistreated. When someone has the courage to tell their mental health story, society turns a blind eye on them and their struggles. This attitude is called stigma: the negative perception of others based solely on the knowledge of their mental health condition.

What is mental illness?

Mental illness, or mental health disorders, are conditions that affect a person’s thinking, feeling, mood, or behavior, such as depression, anxiety, bipolar disorder, and schizophrenia. According to the Centers for Disease Control and Prevention (CDC), 50% of people will be diagnosed with a mental illness or disorder at some point in their lifetime¹. Mental disorders are one of the leading causes of disability worldwide, with depression affecting more than 264 million people globally². In just the United States, mental health problems are prevalent in 1 in 5 people¹. Everyone around the world is impacted by mental illness either directly or indirectly through family, friends, or peers. However, even as mental health problems are widespread, so is stigma and misunderstanding.

The general public views those with mental health problems as dangerous to themselves as well as others³. Aggressive or disruptive behaviors may cause discomfort and negative views towards those with mental illness, leading society to define them as “different”. This is called social stigma, the negative stereotypes that classify people with psychiatric disabilities⁴. As navigating through life with a mental illness already presents a challenge, the addition of stigma estranges and blames individuals for a situation in which they cannot control. Because of stigma, people with mental health problems face countless hardships, such as alienation and seen as “others,” perceived as dangerous and irresponsible, less likely to be hired and receive safe housing, more likely to be criminalized than offered health care services, and afraid of rejection to the point where they pursue less opportunities³. Many individuals living with mental health problems do not feel comfortable talking to their loved ones about the obstacles they face and are, therefore, less likely to seek help.

As stigma in our culture continues to be ignored, individuals living with mental illness may easily internalize the blame placed on them by society. This is called self-stigma, the negative perception of one’s self-based on society’s perception of them. Internalized stigma may lead to the shattering of an individual’s self-esteem as well as social relationships with others, worsening their condition⁵. Too often, people may take their lives because of loss of hope and isolation from society³.

Gravely affecting the well-being of those who experience it, public and internalized stigma continue to be an overlooked problem globally. Why is this issue still so prevalent? Why must individuals with mental disabilities have to be isolated from society? Why must they be treated like this? Why does society only show compassion towards people with physical illnesses like cancer or diabetes? Why can they not do the same for people with mental illnesses? Just like a sprained ankle, mental illness needs immediate attention and care–without it, it will only worsen. By silencing individuals from seeking help, those who need care will give up and the divide in society will only be greater.

What should we do?

Now is time for a change. As people of a community, people depend on each other for support and have a moral obligation to raise each other higher. People with mental illness are no different than “normal” people. Their personality is what defines them, not their condition. Everyone has emotions, thoughts, and day-to-day struggles. Most of the time, from the countless faces that we see walking down the streets, it is hard to distinguish those who live with a mental health problem from those who do not. Here’s what we must do:

How one can take action to help move a step towards a more destigmatized society.³

Even though it may seem hard for society to change, there is hope: it starts with you. You have a voice. You have the power to change the lives of countless people. You can be the light to a chain reaction. And as people of society, all must work together to save and empower the lives of those fighting. Because, ultimately, it’s okay to not be okay.

of stigma experiences, self-esteem and social relationships among people

Michelle Ran is a rising senior in high school situated in Seattle, Washington. She is interested in molecular biology, biochemistry, and psychology, and aspires to pursue a medical degree in the future.