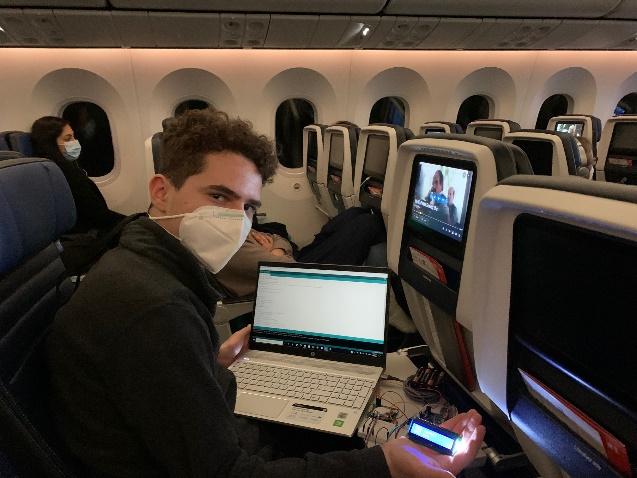 This research documents the levels of CO2 during two long international flights that took place on December 11th, 2020 and January 1st, 2021 (US -> Israel and Israel -> US). Based on CDC guidelines, the risk of becoming infected with COVID-19 increases dramatically in closed, unventilated spaces (as opposed to outside spaces). In addition, prior research has documented that CO2 levels correlate strongly with the airborne spread of infection, and therefore, this research uses the levels of CO2 as a proxy for the likelihood of COVID-19 infection[1][2]. The research hypothesis is that the highest CO2 levels during flights will be observed while boarding the airplane, as passengers are seated close to one another while airplane ventilation is not yet fully active.

On both flights, the research documents that the highest levels of CO2 occurred over approximately 30 minutes between on-boarding and plane takeoff, mostly while passengers were sitting in the airplane waiting for takeoff. Levels of CO2 reached about 1070 parts-per-million (ppm), which is considered poor air quality and means that there is less ventilation on the plane (compared to normal outside air quality of 400-500 ppm). Additionally, the research also documents that another period with high levels of CO2 occurred over approximately 30 minutes before and during landing, while passengers were preparing to leave the plane. Levels of CO2 reached about 950 ppm, which shows minimal ventilation on the plan.

Various sources were used for instructions and guidance.[3][4][5]

The following are photos of the assembled CO2 monitoring unit:

Figure 3. All Components Assembled Before Flight

CO2 levels were captured every 10 minutes on the SD card. Measurements were taken starting at sitting at the gate ahead of on-boarding, until after landing, a total of about 13-14 hours. Time recording was normalized where Time = 00:00 is Takeoff time.

The flights on which the measurements were taken were:

Below are the graphs relating to the takeoff of both flights. Generally, it can be said that the two flights exhibit a similar pattern. In the graph for Flight 1, there were regular levels of CO2 at around 500-600 ppm between the normalized times of -2.0 and -0.5 hours. This is logical as measurements were taken in the terminal of Newark Liberty International Airport which is a spacious, well-ventilated space, and the airport was much less crowded relative to pre-COVID-19 periods. Nevertheless, after boarding the plane, there is a dramatic increase in CO2 levels from 30 minutes to 10 minutes before takeoff, to about 970 ppm. The CO2 levels then continue to increase through takeoff and reach the highest point at 15 minutes after takeoff as the plane is still gaining height. At that stage, CO2 levels went as high as approximately 1040 ppm. About 20 minutes after takeoff, CO2 levels dropped slightly below 1000 ppm, and then continued to decline. As of about 30 minutes after takeoff, CO2 levels begin to stabilize at normal levels of 700-750 ppm.

In the graph for Flight 2, there were low levels of CO2 between the normalized times of -2.0 and -0.5 hours, at about 500 ppm. As previously stated, this data is expected given that measurements were taken in the terminal of Ben Gurion Airport which is a large area with good ventilation. Once plane boarding starts, approximately 45 min prior to takeoff, an intense increase in CO2 levels can be observed at about 20 minutes before takeoff, at about 960 ppm. As time progresses, levels of CO2 continue to increase through takeoff and peak at about 20 minutes after takeoff, where CO2 levels reach as high as 1070 ppm. The CO2 levels then start to decrease, reaching levels of about 650-700 ppm from 30 minutes after takeoff and through the main flight time in which the plane remains at high altitude.

Summarizing the above observations from both Flights 1 & 2 and considering the similarity of the CO2 patterns between the two flights, we can conclude as follows. First, CO2 levels were around 500-600 ppm during the pre-boarding wait time in the airport terminals. As previously mentioned, terminals have relatively low CO2 levels as they are massive, open areas with advanced ventilation. Second, as passengers board the plane and wait in their seats ahead of takeoff, CO2 levels increase considerably about 10-20 minutes before takeoff, reaching levels just below 1000 ppm. This increase is expected given that there is no cabin pressurization while on the ground, and plane engines are minimally engaged contributing to low ventilation. Third, the levels of CO2 continue to rise till about 10-20 minutes after takeoff to levels around 1040-1070 ppm. Typically, air pressure is kept at the levels of around 7000 feet inside the cabin, therefore it is only after the plane ascends beyond 7000 feet that ventilation becomes much more significant to enable pressurized air in the cabin.

Finally, about 30 minutes after takeoff, CO2 levels begin to decrease and stabilize around 650-750 ppm during the steady flight. As noted, once the cabin has been pressurized to 7000 feet levels while the plane is at high altitude, ventilation is very strong and effective.

To summarize, during the takeoff part of the flight, figures 6 and 7 show that CO2 levels are highest in the 40-minute span before and after takeoff, implying that this period is one when people face a much higher risk of getting infected with COVID-19 in the presence of other passengers.

Below are the graphs pertaining to the landing portion of both flights. Both flights exhibit a similar pattern of CO2 levels. The graph for Flight 1 shows CO2 levels continued to be relatively steady at about 700 ppm up to -0.7 hours (about 40 min) ahead of landing, at which point there starts to be an increase in CO2 levels, peaking during the landing itself, at about 940 ppm. This is logical as during the landing phase, once the plane descends below 7000 feet cabin pressurization is stopped, therefore ventilation is lowered significantly resulting in a dramatic increase in CO2 levels. Once the airplane doors are open and the passengers start to leave the plane, CO2 levels greatly decrease and go to very low levels of less than 500 ppm.

Similarly, as per the graph for Flight 2, CO2 levels continue to be relatively steady at about 700 ppm up to -0.7 hours (about 40 min) ahead of landing, at which point there starts to be an increase in CO2 levels, peaking during the landing itself, at about 850 ppm. As previously stated, this makes sense as once the plane descends below 7000 feet cabin pressurization is stopped, therefore ventilation is lowered significantly, resulting in a dramatic increase in CO2 level. Once the airplane doors opened and passengers left the plane, passengers entered the customs check hall in Newark Liberty Airport, a large space with advanced ventilation, and CO2 levels greatly decreased to levels below 600 ppm. While large and spacious, this hall was filled with incoming passengers, which explains why CO2 levels during this stage of Flight 2 (below 600 ppm) were higher than in Flight 1 (below 500 ppm), where the customs hall had significantly less passengers.

Summarizing the above observations, we can conclude the following: first, CO2 levels continued at steady flight levels of about 700 ppm up until 45 minutes ahead of landing. Second, as of 30-40 minutes prior to landing, we can notice a trend of clear increase in CO2 levels, peaking during landing at about 850-950 ppm. We attribute this increase to the stopping of cabin pressurization occurring below 7000 feet as the plane descends, therefore ventilation is lowered significantly, resulting in a dramatic increase in CO2 levels. Third, after leaving the plane and entering the airport halls, CO2 levels return gradually to normal values at about 500-600 ppm. This data shows that during the landing phase of the flight, the highest levels of CO2 are during a 30-minute span before and during landing. From this, we can conclude that the landing phase is one when passengers face a much higher risk of getting infected with COVID-19 given the low ventilation and relatively confined space.

This research documents CO2 levels during two long international flights that took place on December 11th, 2020 and January 1st, 2021 (US -> Israel and Israel -> US). Prior research has documented that CO2 levels correlate strongly with the airborne spread of infection[1][2], and therefore, this research uses the levels of CO2 as a proxy for the likelihood of COVID-19 infection. Specifically, the research sets to identify the flight phases where CO2 levels are the highest, hypothesizing that highest levels will be observed while boarding the airplane, as passengers are seated close to one another while airplane ventilation is not yet fully active.

On both flights, the research documents two peaks of CO2 levels: the first during the takeoff phase, and the second during the landing phase. The highest levels of CO2 occurred between approximately 30 minutes ahead of takeoff until 20 minutes after takeoff, peaking at about 1070 ppm. This phase starts when passengers board the plane and are seated while the plane is getting prepared for takeoff, continues through the takeoff itself, and concludes after the plane ascends to high altitude. We attribute these high CO2 levels to the fact that cabin pressurization starts only above 7000 feet, hence the low ventilation during that entire phase.

Additionally, the research documents that during the landing phase, CO2 levels start to gradually increase from about 30 minutes ahead of landing, peaking at about 950 ppm when the plane doors are opened. Again, we attribute this increase in CO2 levels to the fact that cabin pressurization stops below 7000 feet, hence ventilation is poor during that entire phase.

Finally, the research demonstrates that during the main stage of steady flight in high altitude, good ventilation and cabin pressurizing result in reasonable levels of CO2 , ranging between 600-750 ppm.

Given the observations summarized above, it would make sense that when travelling during the COVID-19 pandemic, passengers should minimize as much as possible the amount of time on the plane before takeoff and after landing. Specifically, during the boarding stage, if passengers can manage to board the plane among the last in line (especially if they do not have a carry-on luggage), this will reduce the length of exposure ahead of takeoff. Similarly, if passengers can aim to leave the plane as early as possible after the plane lands and the doors open, this will reduce the risk of exposure.

Inbar Adiel is in 11th grade and lives in NJ. He participates in the STEM program in his school and always looks for challenges. Recently he traveled to Israel and thought it is a great opportunity to check how safe are flights during Covid19 pandemic with a CO2 sensor that he built by himself.