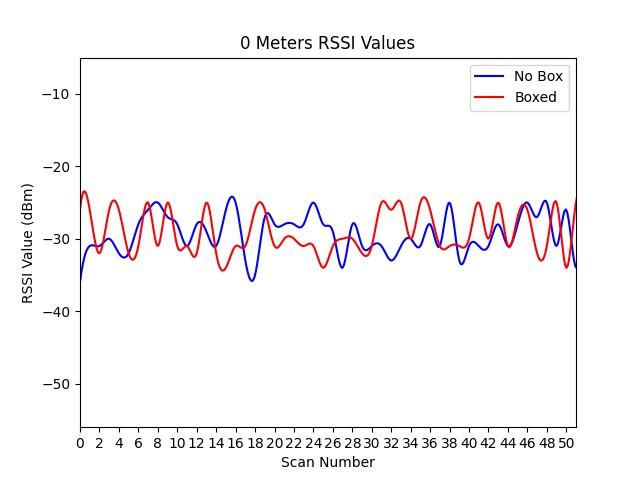 In this paper, we explore the idea of private automated contact tracing through bluetooth devices. This is done through a controlled experiment where Received Signal Strength Indicator (RSSI) values are measured from different distances in both an exposed setting as well as a thinly enclosed setting [3]. The behavior and patterns of the RSSI values are then analysed through different metrics including analysing RSSI values at a single distance, mean RSSI values over different distances, and standard deviation of RSSI values over different distances. From this, it is discovered that enclosings that obstruct the signal strength do not impact the signal strength itself but rather the standard deviation of the signal strength. To generalise these results, a polynomial regression was run to compare the patterns of RSSI values between both the enclosed and exposed device. The patterns in the regressions between both environments indicated no major variance of RSSI in the different settings. To further extrapolate RSSI through an equation, we analyse the Log Normal Shadowing Model as well as limitations of this model. To overcome these limitations, we present a completely new and resilient proximity detection algorithm that introduces a unique device constant to account for variations in RSSI values with different devices and better predict RSSI values at different distances.

This project addresses one primary aspect of the Private Automated Contact Tracing (PACT) project: how bluetooth signals will differ between thin closings versus no enclosings [6]. When using bluetooth devices, such as smartphones, the majority of the time they will be inside the user’s pocket or similar location. For that reason, it is important to compare when the device is covered by a thin enclosing such as cloth and when it is completely out in the open. This project attempts to find variations or patterns between the receiving signal strength indicator (RSSI) when the device is in a thin enclosing versus when the device is not enclosed.

In this experiment, we utilise the bluetooth features from two Raspberry Pis. One Raspberry Pi acts as the advertiser which sends out a signal. These signals are then picked up by the other Raspberry Pi which acts as the scanner. The bluetooth signal strength is measured by its receiving signal strength indicator or RSSI. A stronger RSSI will have values closer to 0 dBm while weaker RSSI will have values closer to -100 dBm which marks the weakest an RSSI can become [8]. In this experiment, we make the following assumptions:

B. Hypothesis and Investigation

In order to test out this hypothesis, the most intensive part of the investigation is the data analysis. With the data analysis, several statistical measures will need to be taken in order to cover all relationships between the RSSI values of thinly enclosed and exposed devices.

B. Plan and Execution

Table 2 lists the details of the advertiser:

In order to conduct this experiment, one Raspberry Pi was set as the advertiser and the other as the scanner. The scanner would then run the core program to record RSSI values and append them into a CSV file. This was done for each distance starting from 0 meters and ranging to 10 meters with a 2 meter interval. The scanners would record for a period of 100 seconds. Then, his whole process would then be repeated except this time with a thin enclosure.

The primary limitations of this project regarded control over the environment variables and their effect on this experiment. For that reason, the environment was kept constant so that discrepancies between a changing environment would cancel out. The environment staying constant allows this because it ensures all external factors outside, such as different conditions (i.e. outside versus inside), impact all the trials equally.

The data that was collected and analysed consisted of the first 50 scans of the advertiser at 0,2,4,6,8 and 10 meters with one trial being thinly enclosed and the one trial being exposed. This was done so we could properly measure the relationship between the advertiser and scanner not just at one distance but several. This proved helpful when comparing the average RSSI between both states.

Graphing the RSSI Values for 0 meters we get the following graph:

Graphs and data for the other distances can be found at the data and code repository.

Fig. 2. Mean RSSI Values of a thinly enclosed and exposed device from 0 – 10 meters based on collected data

In graphing the mean RSSI values for each distance, we notice that after the 8 meter mark both the thinly enclosed and exposed devices are not found– the signal beyond the 8 meter mark is not detected. Additionally, no significant differences in RSSI values or patterns between the thinly enclosed and exposed devices were found because the shape of the graph stayed, relatively speaking, the same. Therefore when comparing the RSSI values at face, there is no significant change between the states.

Fig. 3. Standard Deviation of RSSI Values of a thinly enclosed and exposed device from 0 – 10 meters based on collected data

The graph depicts that the standard deviation of a thinly enclosed Raspberry Pi is significantly higher than the standard deviation for an exposed device. This is likely caused by the blockage from the enclosing which could cause signals to only sometimes go through or become scattered. However, the exact reason is unknown. There are also stark dips and peaks within the Boxed Raspberry Pi’s standard deviation–while it is likely this is because the RSSI fluctuates when the signal interacts with the box. However, once again, the exact reason is unknown.

Fig. 4. Polynomial Regression of mean RSSI Values of a thinly enclosed and exposed device from 0 – 10 meters

The parts of the Log Normal Shadowing Model are as follows [4]:

The goal of developing this algorithm was to get an RSSI versus distance relationship that would be applicable to the Raspberry Pis that were used in this experiment. Through repetitive experimentation, applying the following parameters in Table V, Figure 5 is representative of this experiment:

Originally, it was hypothesised that the RSSI strengths would decrease in a thinly enclosed device because of the obstructions. However, the experiments showed this to be false. From the statistical analysis of the experiments, it was concluded that while the standard deviation between the RSSI values of the thinly enclosed and exposed devices differed greatly, the RSSI itself did not. This was concluded through looking at the standard deviation graphs for the RSSI at different distances and comparing them to the mean RSSI graphs.

From this experiment, there were two noteworthy conclusions: the relationship between the thin enclosing and its effect on the RSSI and the Modified Log Normal Shadowing Model.

Bluetooth contact tracing’s success is subject to so many different factors. In this experiment alone, the environment and devices were kept constant yet there were many variations within the results of the data. Culminating all the factors such as environment, privacy, obstructions and more make bluetooth contact tracing on the less feasible side without heavy development on applications that are specially designed for contact tracing.

All code and data for this project can be found here: https://github.com/SamratSahoo/RPiContact-Tracer

From this experiment there are two primary paths to take in order to expand this project.

Samrat Sahoo is a High School Senior from Rick Reedy High School in Frisco Texas. He is an avid researcher, software developer, entrepreneur, and visionary. His primary areas of interest include but are not limited to machine learning, microcontrollers, and robotics.