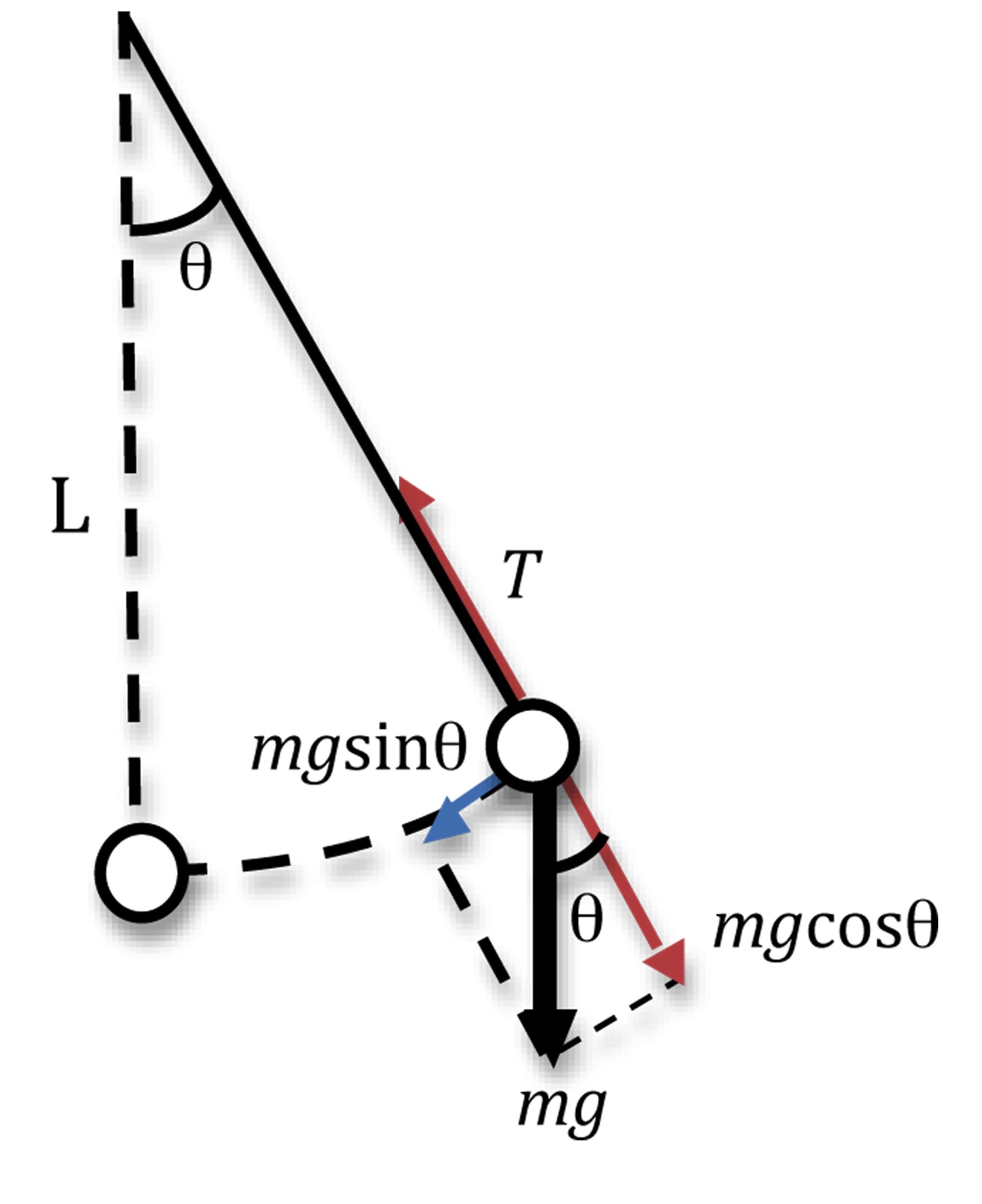 In this experiment, a simple pendulum device with a length of 1.3m is made and used to measure the period of the simple pendulum with the accuracy of several milliseconds through the Arduino. A light sensor and a laser are used for the measurement.

Motivation and Purpose of Research

1. The history of the study about a simple pendulum

2. Period of an ideal simple pendulum when the amplitude is small

A simple pendulum can swing by its weight. An object of mass

is suspended on the string. With the gravitational acceleration

of the pendulum can be divided into two, as shown in Figure 1. The force that contributes to the motion of the simple pendulum is

Equation 1 is the general equation of motion.

is the force acting on the weight,

is the acceleration of the weight. The equation of motion of the simple pendulum is as shown in Equation 2.

is the length of the pendulum. If the amplitude

is very small in Equation 2,

can be approximated by

The known solution to Equation 3 is Equation 4.

is a constant value depending on the initial condition. The time when the cosine function of Equation 4 is completed, that is, the period of the simple pendulum is given by Equation 5.

3. Ideal period of the simple pendulum when the amplitude is not small

When the amplitude increases, the period should increase according to Equation 6.

The Principle of Experimental Apparatus

2. Shine the laser beam on the light sensor.

3. Adjust the amplitude to 10° while looking at the protractor attached to the apparatus.

4. After releasing the simple pendulum from the hand, allow the pendulum to oscillate until the period value appears on the serial monitor three times.

Figure 3 ​Change of period according to increasing amplitude

Figure 3 shows the dependence of the period on the amplitude. Linearly increasing tendency can be observed. However, it did not fit well with the tendency to increase in the parabolic form in Equation 6. It was difficult to observe the tendency when the amplitude is within 16°. Therefore, the amplitude was increased to 90° and the experiment was carried out again.

As shown in Fig. 4 and Fig. 5, the wood board was removed and replaced with Teflon and brass parts to improve the durability of the equipment and to change the amplitude freely. In addition, a ​protractor was attached to allow more precise amplitude manipulation. The amplitude is increased from 10° to 90° in 5° intervals. The measured period is shown in Fig. 6

Fig. 6 ​Dependence of the period of the simple pendulum on the amplitude

I​n Fig. 6, the dotted line represents the estimated value including the second-order term for the amplitude in Equation 6. The value of the gravitational acceleration assigned to Equation 6 was 9.8m/s^2 and the length of the pendulum was 1.23 m. The length of the simple pendulum is designed to 1.3 m, but considering the weight of the weight holder, the length of the centre of gravity is shortened. The period of the simple pendulum was recorded while the simple pendulum swung three times, and is indicated by circles, squares, and triangles in Fig. 6. The average of these three values ​​is shown in red circles. The period measured by the experiment increases in the parabolic curve as amplitude increases. It was well agreed with our prediction. The maximum error was 2.5% at 75 degrees of amplitude. At 75 degrees of amplitude, theoretically, 2479ms of the period is expected.

Also, we found that the period decreases as the number of the swing increases. It is interpreted that the amplitude of the third vibration is smaller than that of the first vibration due to the friction, and thus the period decreases. This was an unexpected result contrary to the general expectation that the period of the third oscillation would be larger than the first oscillation by friction. The period with an amplitude of 10° was 2.238s. The amplitude of 2.260s, which is a 1% increase over this period, can be seen as about 30°. Therefore, it can be seen that the isochronism of the simple pendulum is correct within the 30° of amplitude.

The misconception that the period of the pendulum will not change was generated by approximation in the derivation of the equation. Equation including the quadratic terms for amplitude is in agreement with our experimental result within 2.5%.

If we hadn’t used Arduino and laser, these accurate measurements would have been impossible. The period difference between swinging with the 85 degrees and 10 degrees was only 310ms. It’s a good example of experimentation that uses Arduino’s precision to uncover what was wrong.

5. Matthews, Michael R..1994. Science Teaching: The Role of History and Philosophy of Science.

6. Mahoney, Michael S.. 2007. Christian Huygens: The Measurement of Time and of Longitude at Sea. Princeton University

Living in Pohang, Chang Jun and Jin Young are students in Pohang Jecheol Middle School, South Korea. They’re interested not only in physics, but also oragami and math. Currently they are studying coding and physics together.