Dark energy. Sounds like some kind of power a movie supervillain has. Or a mysterious groundhog with magical powers. A power that is invisible and unseen, a power that is dark and mysterious. In reality, this description is not exactly wrong. Dark energy is a kind of energy that actually exists in the universe. In fact, it makes up the majority of the universe. The idea of dark energy remained a theory for nearly 14 years, until the discovery in 1998 (by cosmologists Saul Perlmutter, Brian Schmidt and Adam Riess) that the universe’s expansion is accelerating. Their findings were based on the observation of supernovae, and earned them the Nobel Prize in Physics in 2011.[2] These cosmologists knew that something other than matter had to be responsible for this rapid expansion of the universe, and dark energy seemed like the best candidate. Now, this mysterious, theoretical type of energy is accepted by most cosmologists. However, due to its darkness, it has not been detected, and some dispute its existence and propose that other factors could be driving the expansion of the universe. Even if dark energy does exist, there are still questions that remain unanswered. What exactly is dark energy? How did we manage to conclude that this mysterious pushing force exists? What secrets still lie in the universe?

Discovery of Background Radiation / How much energy exists?

Although the concept of dark energy was not widely accepted until the discovery of the accelerating expansion of the universe in 1998, the idea has deeper roots. One of the first main developments in our understanding of dark energy was the discovery of cosmic microwave background radiation (CMBR). CMBR is a “radiation bath” of photons that is thought to be leftover radiation from the Big Bang. In 1964, American astronomers Arno Penzias and Robert Wilson accidentally discovered it when they couldn’t get rid of a constant noise that their antennas picked up. They worked with astronomer James Peebles, who realized through his calculations that this radiation was CMBR and that it could be used to find out the amount of matter and energy produced in the Big Bang event and existing in the universe.[1]

The cosmologists were able to determine through the CMBR that 4% of the universe was observable (e.g. galaxies, stars, planets), and that 23% was made up of a mysterious matter called “dark matter.” The remaining 73% of the universe was unknown, until James Peebles provided an interesting solution to this mystery: it was dark energy. By reviving Einstein’s cosmological constant Λ to represent the presence of dark energy, he was able to adjust the existing equations to support the idea of an expanding universe that is accelerating.[2]

The Cosmological Constant is Not New

Albert Einstein is considered as one of the greatest theoretical physicists ever. He developed the theories of relativity (both general relativity and special relativity), which became two of the keystone theories of modern physics and cosmology. He developed one of the most famous equations in physics: E = mc2. In the equation, E represents energy, m represents mass, and c represents the speed of light. Since c does not change, the equation implies that energy and mass have a constant relationship.

But why is Einstein mentioned when talking about dark energy, a concept that doesn’t seem to be related to any of his theories? Actually, the concept of dark energy is not new. It was all right there, in Einstein’s theory of general relativity. Essentially, the theory describes gravity not as an invisible force of attraction between objects, but as the curvature of spacetime. This curvature depends on both energy and momentum, the specific relations of which are defined by Einstein’s field equations:[3][8]

This equation introduces a new constant: the cosmological constant, Λ. Einstein added it to his equation in order to balance out the gravity that was eventually going to collapse the universe back together in a hypothetical scenario called the “Big Crunch.” This constant was ultimately supposed to bring the universe in a static, unchanging state. However, it was later found out that the universe was not static and instead expanding, by Russian physicist Alexander Friedmann, who created his equations based off of Einstein’s field equation[4]:

When Einstein found out that the universe is actually expanding and not static, he saw that the cosmological constant Λ was no longer of use, and called this his “biggest blunder.” However, this was to change, as in the 1980s, cosmologist James Peebles and his team brought this constant back to life with their discovery of the accelerating expansion of the universe. With this discovery, they associated the cosmological constant Λ with the existence of dark energy, which many cosmologists and scientists highly agreed with in a short period of time.[1] So, was Einstein’s “biggest blunder” really a big blunder? Not really. Although Einstein thought that he had made a mistake simply by creating the cosmological constant Λ, in the end, his use of the constant was eventually correct. He merely believed that the universe was static, rather than expanding, and he never imagined that a force like “dark energy” could consume the majority of the universe.

What exactly is dark energy? Maybe it is some kind of vacuum energy. Perhaps it’s some new weird matter. Or perhaps Einstein and his cosmology crew made a mistake. The mystery about dark energy has two major sides. One argues how it is not actually a mystery, while the other argues how it is considered a mystery.

No, it’s not a mystery

Dark energy is not a mystery. The concept of dark energy and how it accelerates the universe’s expansion has already been predicted by the theory of general relativity and Einstein’s cosmological constant Λ. The already existing Λ cold dark matter (ΛCDM) model illustrates that the cosmological constant exists and it is a model that is “almost universally accepted by cosmologists as the best description of the present data” about dark energy.[5]

Others might argue that the “coincidence problem” exists. They point out that humans live in a time period where “the contributions from matter and Λ to the cosmic dynamics are comparable in magnitude,” which seems like an unlikely coincidence, and makes them suspicious of the ΛCDM model.[5] However, proponents of the ΛCDM model point out that this time period, when viewed on a linear scale, comprises half of the Universe’s life, so this coincidence is quite likely to occur. Moreover, it should not be assumed in the first place that humans currently live in a random point in the universe’s lifetime.

There are only a few observations regarding the discovery of dark energy. One observation is from 1990, in which astronomers Steve Maddox, Will Sutherland, George Efstathiou, and Jon Loveday revealed several surprising results related to their recent observations of several galaxies and clusters of galaxies. They found out through their UK Schmidt Telescope Unit in Australia that cold dark matter and subatomic particles known as baryons comprise 20% of the universe. The remaining 80% was considered as the cosmological constant. This model soon became known as the Λ cold dark matter or ΛCDM model. This model would later be utilized for explaining the existence of dark energy.[6]

Percent Composition of the Universe

At the moment, there are not many observations regarding dark energy, but there will be future experiments and technologies that will reveal the mysteries about dark energy. The experiments/projects include: Euclid mission, Nancy Grace Roman Space Telescope, and the James Webb Space Telescope. All of these telescopes and missions are set to launch sometime between late 2021 and 2025. These experiments would help determine when the universe switched from decelerating to accelerating, which is an important part of understanding dark energy.

Even though there is still much that we don’t know about dark energy, and some doubt that it even exists, the concept of dark energy is a crucial one that completely changes our understanding of the universe. Astronomer Brian Schmidt asserts that it may be a form of antigravity and that it may have “physical properties that essentially makes gravity repulsive instead of attractive — it’s a pretty big deal.”[2] This repulsive force could counteract the forces of gravity and cause the universe to expand.

The universe’s lifecycle and its future[1]

Whether or not expansion is accelerating completely alters the fate of the universe. Before 1998, it was generally believed that the expansion of the universe was decelerating. This meant that the universe would eventually collapse on itself, a scenario known as the “Big Crunch.” However, thanks to the Nobel Prize winning discoveries of Perlmutter, Schmidt and Riess, it now seems that we live in a dark energy-dominated universe, where the expansion rate is accelerating. This means that instead of the “Big Crunch,” we may experience a phenomenon called the “Big Chill,” a scenario where the universe expands to a stage where our group of galaxies would be separated into a cold, empty universe. In fact, we may even be seeing a universe which is expanding so fast that it may cause the “Big Rip,” a scenario where the quick expansion of the universe may rip apart galaxies.

Possible outcomes of the universe[2]

Unraveling the mystery of dark energy is the key to answering these important questions and understanding our universe. As Perlmutter said in 1998, “if we can spend the next decade measuring things then I am optimistic that we will make progress in understanding dark energy. This is a fairly new field, so there is a reasonable chance of a breakthrough.”[2] Although scientists still have not had the breakthrough that Perlmutter was hoping for, Schmidt notes that the precision of the data obtained from supernovae has improved tenfold in that time. If the Euclid mission, Wide­Field Infrared Survey Telescope, and James Webb Space Telescope projects proceed as planned, scientists may soon have an answer for some of the most pressing questions about dark energy. In the meantime, even if dark energy cannot be completely understood or proved, it is still a useful model to consider because it explains many phenomena that we have observed in the universe. 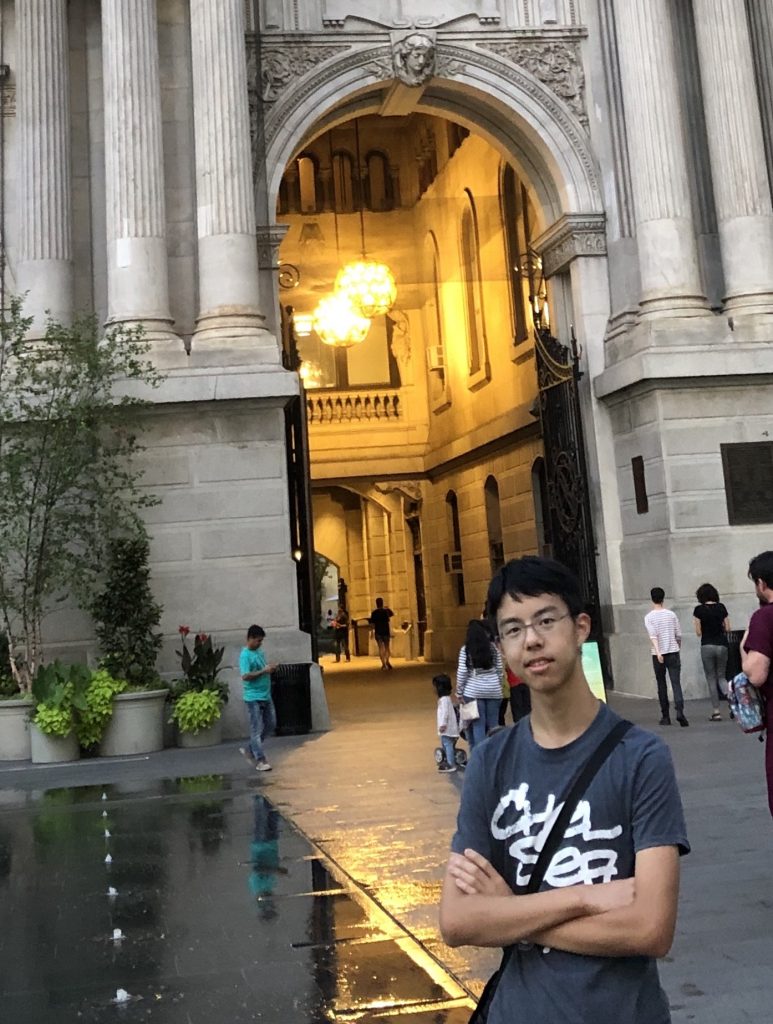 Christopher Lee is a junior at Seoul International School in South Korea. He is interested in the fields of Astronomy/Astrophysics and Computer Science.
He is also a member of the Track and Field team and enjoys running outside often.