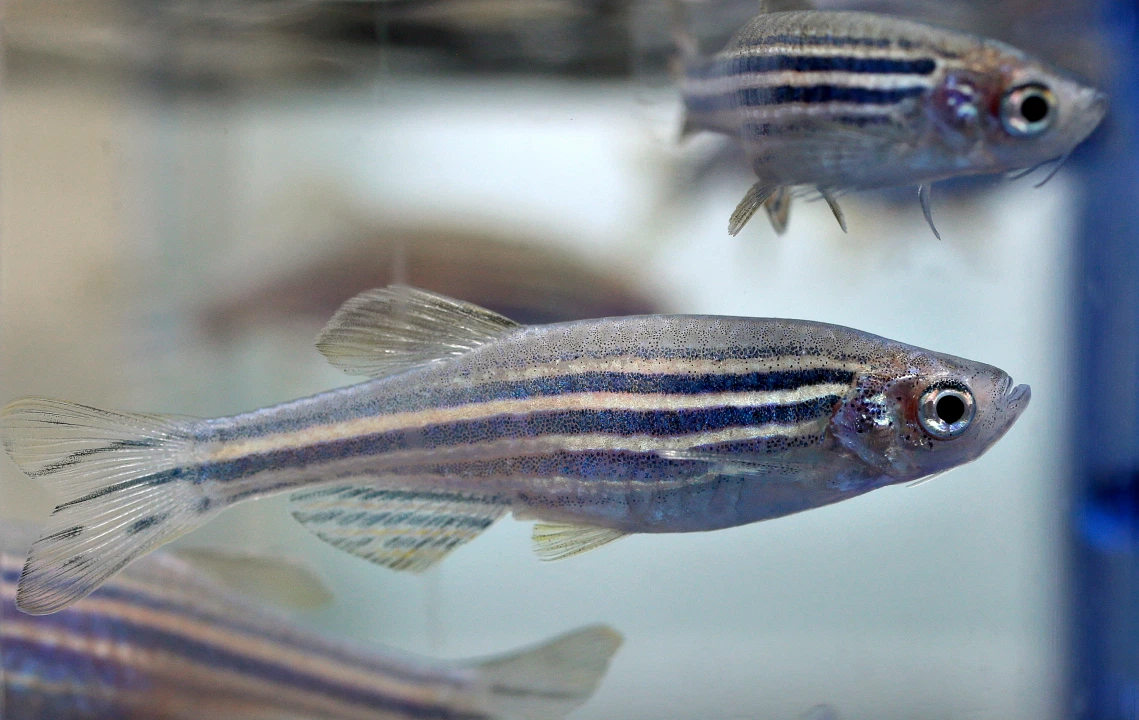 Parkinson’s disease (PD) is a neurodegenerative condition which causes deterioration of certain parts of the brain over time. It can be identified by the symptoms of tremors, stiffness and slowness of movement. The less noticeable symptoms, however, can be dementia and depression. There are copious amounts of research addressing what exactly causes Parkinson’s disease, and treatments aimed at alleviating the symptoms of the disease are being developed. The Parkinson’s United Kingdom (UK) website characterises Parkinson’s as being heavily involved with a lack of the neurotransmitter dopamine and with many genes which contribute to the disease. [8] While Parkinson’s is an incurable human disease, novel research aimed at addressing the regenerative capacity of zebrafish and the genes has emerged. This review article will discuss the use of zebrafish to discover treatments for Parkinson’s disease through its suitability to help construct PD models.

There are various parts of the brain responsible for motor control. A significant part of the brain with regards to Parkinson’s is the Substantia Nigra (SN), and a section called the pars compacta (SNc) diminishes in a person with Parkinson’s. [3] The degeneration of substantia nigra cells blocks off the transport of dopamine to the striatum, which is the pathway to the SN. The striatum is also a pathway to the basal ganglia, which is involved in motor learning and voluntary movement. The disruption in communication among the motor cortex regions, therefore, disrupts motor control. The SNc uses the neurotransmitter dopamine and produces melanin as a by-product. A gene called SNCA has been linked to Parkinson’s disease as it is responsible for the production of the protein alpha-synuclein.[11] When this protein misfolds, it forms clumps called ‘Lewy bodies’, which is associated with brain cell death and impacts the amount of dopamine released at a synaptic vessel.

Current ways of treating PD and why is it incurable?

Parkinson’s is currently incredibly difficult to diagnose as the symptoms vary between patients. The progression of the disease is also incredibly gradual, which means the symptoms are quite hard to spot during the beginning years of the disease. It is particularly difficult since many of the symptoms such as bradykinesia can also be due to old age. There is currently medication available to improve the symptoms of the disease, but none thus far to cure the disease itself. Both non-drug and drug treatments are in use, with the most common drug being ‘Levodopa’. Non-drug treatments include physiotherapy, counselling and deep brain stimulation. [9] While levodopa does improve motor problems, it does not address non-motor symptoms and becomes gradually less effective over time. [2] It also uses a substantial increase in dopamine and causes the side effect of dyskinesia. The current drug treatments are somewhat effective, but better drugs can be created by researching more realistic animal models, such as that of zebrafish to test the efficacy of the drugs more thoroughly. The drug also needs to target the dopamine receptors in the striatum to improve the accuracy of treatment of symptoms.

Zebrafish are a popular model organism within pharmacogenetics and are currently being used to understand the complexity of the nervous system. They have been used to produce PD models and are incredibly useful for drug screenings. Their neural circuits are easily distinguishable, and their molecular mechanisms are highly conserved, therefore making it a good model for vertebrates. [12] The small size and optical transparency of zebrafish also contributes to its suitability to model movement disorders as it allows for cellular processes to be observed in vivo. Zebrafish and humans surprisingly have a lot of genetic similarities, among those being an anatomically homologous nervous system.

The relationship between zebrafish and human synuclein genes

Zebrafish have been used to explore the roles of synucleins in vivo. Although some zebrafish genes are homologous to the human genes involved in PD, alpha-synuclein is not present within zebrafish. Zebrafish instead express three isoforms of the gene, with the zebrafish ɣ1-synuclein gene being the most similar to human α-synuclein. [7] Like in alpha-synuclein, when this zebrafish gene is over-expressed, Lewy bodies are formed. When this gene is knocked down, it causes a loss of dopamine which then induces motor impairments in zebrafish.

Parkinson’s is not only caused by the gene SNCA, but also by the mutation of the gene FBXO7, which causes the loss of dopaminergic neurons. Scientist Tianna Zhao and her colleagues came up with a model for PARK15 (a form of early-onset Parkinsonism). [10] They identified the analogous zebrafish gene (zFbxo7) and created a knockout model resulting in morphant zebrafish larvae which were tested alongside wild zebrafish to see if they displayed the symptoms of PARK15. The researchers used DanioVision to track the swimming behaviour of the larvae in an observation chamber. [14] EthoVision XT, a video tracking software, was used to measure their velocities. They observed morphant larvae to be substantially less active in comparison to the wild zebrafish larvae. Thus, it is evident that the gene FBXO7 plays a role in Parkinsonism, and more importantly, that zebrafish and humans both display a similar dopamine-dependent locomotor effect, making it a suitable model for human PD.

Experiments using MPTP and 6-hydroxydopamine have allowed scientists to discover properties of the zebrafish which would be useful to learn more about the progressive degenerative process that is PD. Exposure to MPTP causes the loss of dopaminergic neurons. [5] Parkinsonian toxins like MPTP can cause mitochondrial dysfunction in neurons as the neurons work harder to overcome the toxic effects.[1] These toxin-based models are highly useful as they do not show any system except for the dopaminergic systems. Since the zebrafish larvae are very permeable, they were exposed to the MPTP through the water. As a result of the decrease in dopamine, the zebrafish had motility impairments, such as a slower velocity when swimming. [12,5] The MPTP had a similar effect on its dopaminergic neurons as it did on mammals. [6]

6-hydroxydopamine is injected into the muscles of adult zebrafish to induce dopaminergic lesions, as the loss of dopaminergic neurons was seen to be greater with 6-Hydroxydopamine compared to other neurotoxins. [12,4] This caused a decrease in dopamine levels which consequently resulted in motility impairments. Furthermore, the dopaminergic neurons recovered 30 days post-lesion, due to the high regenerative capacity of the zebrafish’s nervous system. Dr Thomas Becker from the University Centre for Discovery Brain Sciences stated: ”zebrafish have a much higher regenerative capacity for dopamine neurons than humans” and that ‘’understanding the signals that underpin regeneration of these nerve cells could be important for identifying future treatments for Parkinson’s disease.” [15]. This suggests that zebrafish hold immense potential for curating effective drugs to treat Parkinson’s in the future, due to its unique ability to regenerate neurons rapidly.

The proven similarities in the nervous systems of humans and zebrafish have facilitated the use of zebrafish to produce models for PD. These models will be incredibly useful for finding suitable drugs to treat Parkinson’s. Furthermore, the astounding neuro-regenerative capacity of zebrafish is an exciting area of research for treatment for degenerative diseases like Parkinson’s. Not only does it promise a bright future for drug treatment, but it has also enabled the furthering of knowledge in pharmacogenomics. Scientific experiments on zebrafish have elucidated the relationship between some genes and Parkinson’s. The novel area of pharmacogenomics involves engineering drugs that specifically target these genes in the body. [13] This helps combat the broad range of symptoms which makes Parkinson’s undiagnosable, as genetically personalised medicine with the help of zebrafish research may be the new pioneering realm of Parkinson’s treatment.

13. “What Is Gene Therapy?.” 2020. Genetics Home Reference. Available at: https://ghr.nlm.nih.gov/primer/therapy/genetherapy.

In vivo: ‘within the living’ – observing the overall effects of an experiment on a living subject

Gene knockdown: experimental technique by which the expression of one or more of an organism ‘s genes is reduced.

Dopaminergic system: the pathway of neurons that synthesize and release the neurotransmitter dopamine

6-Hydroxydopamine: Also known as Oxidopamine/ 6-HOD -and is an antagonist to dopamine

Dopaminergic lesions: Damage to the striatal tissue which results in the loss of striatal dopamine content

Deep brain stimulation: implanting a device to send electrical signals to the brain

Shwetha is a 17 year old student at King Edward VI Grammar School taking her A-levels in Maths, Biology, Chemistry and English Literature next year. She is very passionate about scientific research and writing articles. She hopes to study medicine at university.

One thought on “Could a fish be the key to curing this human disease?”