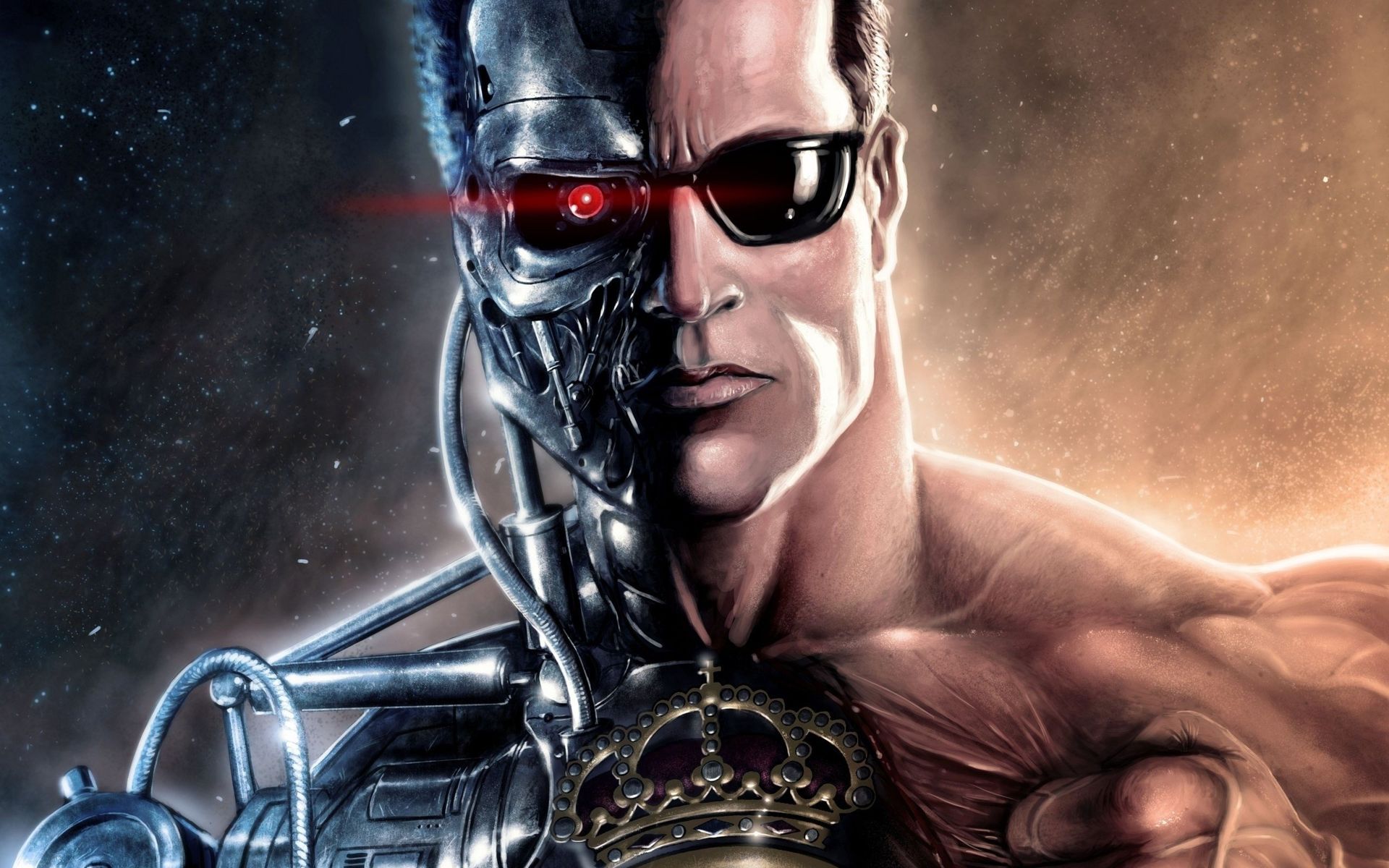 What do Darth Vader and a Cyberman, two of the most iconic science fiction villains of all time, have in common? The answer, of course, is that both are actually human, but with the vast majority of their body made from synthetic materials. In the twenty-first century, many people who would have been crippled by amputation last century can now have their limbs replaced by a robotic one. Although these limbs are still crude, a mass of technological research is being put into them, and they are fast improving. Furthermore, if synthetic limbs are possible, then why not synthetic organs, or transport systems such as nerves and blood vessels. Essentially, as far as we know, the entire body is suited to one purpose, to ensure the survival of the brain. The brain is the only organ that we do not really understand, and ironically is the organ that, more than any other, makes us who we are. The rest of the body is essentially an organic life support system for the brain. Humans are, to all intensive purposes, organic Cybermen.

Countless processes allow the human body to function, many of them extremely complex. A cybernetic human would, given present technology, be rather simple, and as a result there would only be space for the absolute necessities. Limbs are an obvious necessity given our present lifestyle, and these would be relatively simple to make; already, thousands of people are equipped with artificial limbs. Although theses are crude and often difficult to control, they are rapidly improving. Very recently a new artificial hand was developed, complete with all the complexities of a real hand. It even weighed less than a real hand. The difficulties of controlling such limbs and connecting them to the nervous system are also being worked on. On Rhode Island recently, electrodes implanted into a paralysed man’s brain allowed him to move a robotic arm freely.

However, since the brain is essential for a living human, then the brain at least must remain inside any cybernetic body. This brain would require all the attention of any other brain, and as such some of the body’s organs would have to be present in cybernetic form. This would include the heart and lungs at the very least. The heart is a very easy organ to reproduce, since it is little more than a pair of pumps. The lungs would be rather harder, since their success is owed to the massive surface area of the millions of alveoli. This could only be reproduced using extensive nanotechnology, which is still in its infancy. Another problem is to do with blood. Red blood cells are by far the best known transport systems for the human body, and glucose, oxygen, water, and others will still need to be transported to the brain, which would have to remain in the body. White blood cells would also be essential, so as to fight off any diseases that might still attack the remaining brain. The trouble is that huge quantities of blood cells die every day, but are replaced by new ones produced in the bone marrow. Would this mean that actual marrow would have to be included in the body, so as to ensure the production of new blood cells? Another problem is of course, reproduction. Gamete production is a process performed only in the ovary/testes, and the random crossing of the genes requires nuclear Meiosis. Therefore in order for reproduction in a cybernetic person, real sex organs would have to be included, which again means that a purely cybernetic person is impossible.

Another problem is that while a heart, lungs, and transport system are enough to keep a human alive (provided the necessary elements such as glucose are regularly taken in), it certainly does not allow for the lifestyle that we afford ourselves. The sensory organs would have to be for the human to be able to interact, and while hearing and sight would be relatively simple, touch, taste and smell would be rather harder to create, but just as important. Speech would be straightforward, and it has already been tested (Stephen Hawking). The consumption of food and drink would be impossible unless the entire digestive system (which includes almost every other organ) were in place. And while some of these digestive organs are relatively simple (such as the ileum, which works much like a lung, and the kidney, which is just a complex filter), others, like the liver, would be much more difficult, since it has to analyse all the different substances in any food. The production of enzymes would also be essential, in order to break down any eaten food or drink. Since these enzymes are difficult to make synthetically, a real pancreas, the producer of most enzymes, would have to be installed within the body. The cybernetic organs would all have to be made very, very small to fit inside the cybernetic body, and to achieve such minute precision would again require an extended knowledge and skill in nanotechnology, which we do not have as yet.

Even if all these amazing technological possibilities were reached, and there is a frightening possibility that they might be, use of them in a human only creates a new, still worse problem. Such a complicated, intricate nano-system would be incredibly easy to damage. And when said system is supporting the life of a human who is helpless should the system fail, (look what happened to Vader), such damage would be invariably fatal, but extraordinarily likely.

Even assuming that everything did work out correctly, one major problem with the system would remain, appearance. Few people today like to make it obvious that they have a synthetic limb, preferring instead to hide it beneath a layer of skin-like material. Again, however, considerable research is going into the development of skin-like materials, and recently Hiroshi Ishiguro succeeded in making an almost unrecognisably human-like robot. So for anyone who did want to hide the fact that they were in-fact, a Cyberman, it is very possible.

Major Cybernetic Organs, and how they could work

This organ is very simply a twin set of pumps. It is very easy to replicate.

Rather harder, this organ would require an enormous surface area to volume ratio, and also a strong but elastic partially permeable outer layer.

A simple sack with cylinders to compress it, connected to a source of dilute hydrochloric acid. The material must be unreactive with acid.

Fairly simple. A mere section of tubing connected to the pancreas (real), liver, and stomach.

Again, fairly simple. A length of tubing made of partially permeable material, possibly visking tubing. But again, a large surface area to volume ratio would be required.

Another length of tubing with a partially permeable membrane. Able to compress to squeeze water out of any faeces, and with an outer layer of impermeable tubing to collect the water.

Kidney
A simple organ, merely a small machine capable of ultra-filtration. Many large kidney machines are used in hospitals following a kidney failure.

Very simply a storage device for urea. A trigger can open the urethra when the bladder reaches a certain weight.
Of course, the above organs are rather more complicated to recreate than it would seem. Also, many bodily processes are controlled by the brain via hormones, not nerves. These hormones are also not easy to create synthetically and as such, many of the hormone producing organs would have to be left in their real form. There are other problems too. However, it is not difficult to see that, despite the practical difficulties which would make such an endeavour all but impossible, it would be theoretically possible to create a perfectly normal behaving and living human adult almost entirely cyborg, minus a few organic essentials.

Although it is theoretically possible to make a fully cybernetic human, there would be one problem even with trying. The idea is so unethical that it would never be approved by any association. The idea of effectively converting life to robots is far too extreme for modern society. However, the research that could be put in to developing parts of a cybernetic body could still be put to good use.

This would occur primarily in transplants, when a patient had lost use of a particular part of their body. Organic transplants are flawed because they are destroyed by the immune system as a foreign body. Stem cell research to produce identical organs that would not be attacked is far from perfect, and is also ethically challenged. A synthetic transplant, if the science was ever perfected, would be invincible to the immune system, and no ethical group has yet challenged an artificial limb or pacemaker.

Although these organs would be highly difficult to manufacture and would have to be frequently checked or replaced to ensure that they continued to function correctly, they could nevertheless save lives, and despite the high risks, impracticalities and costs, if it can achieve the saving of human lives on a large scale, the risks will be irrelevant. The technology is possible and we are not far from it. Why hesitate?!