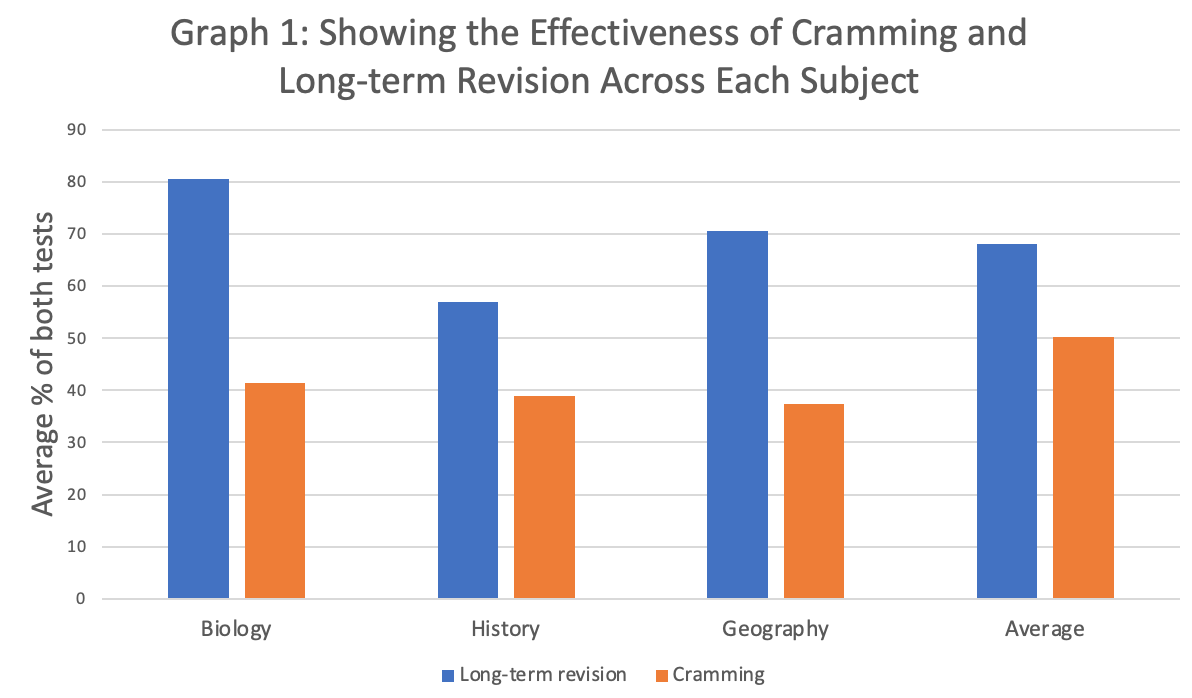 When students receive the news that they are going to have a test; they often have two main options: they can start revising early on, or they can try to cram the information into their head the night before the test. The majority of psychologists and educators believe that cramming information is significantly less effective than spreading revision over a long period [1]. However, students have become very effective at cramming masses of information over short periods of time, and producing strong results in examinations. This study will therefore compare the effectiveness of the two types of revision in an academic setting.

It would seem obvious that since revision over a long period requires more effort, it should be likely to produce better results. Long-term revision has been linked to the psychological process of spacing effect, which is the benefit of spacing learning events over time rather than massing them together. The spacing effect has been seen to produce greater effectiveness in learning compared to learning a mass of information at once [2]. Stafford suggests that cramming a mass of information is ineffective because this method of revision results in a storage of information into the short term memory, and since the short-term memory is fragile [3], the information is easily lost. Stafford and Dewar have also shown that information (related to a video game) is stored more effectively when there are gaps between learning [4].

Despite this evidence, it is clearly visible that cramming is popular amongst students [5], and some students can produce strong results from ‘last-minute’ revision. Kornell and Bjork (2008) found that the majority of learners consider cramming masses of information to be more effective than spaced, long-term study.[6] Additionally, many of the studies that compare long-term spacing revision and cramming do not use procedures that can be related to an educational setting [7][8]. Therefore, it could be the case that even if cramming does not store general information well, it can be effective with academic content, and when students are motivated for an important examination.

This study compares the performance of students who have studied a subject over a long period of time to students who have had no knowledge about a subject until a short cramming session. It is rare for a study to use real students, and especially rare to use content that the students are actually studying for their official examinations. These conditions will provide an actual academic setting, making it possible to show the accurate effectiveness of the types of revision in the context that they would be used on. Students will be motivated to perform well on the test, as it will be an indication of their performance in their actual examinations. The aim of the study is to compare the effectiveness of spaced long-term revision and cramming in a short time period on an examination-like test. Furthermore, the study investigates whether cramming has a greater effect on the type of information required – recall or recognition. Recall testing measures the ability to retrieve stored information without any prompts or cues. Recognition testing measures the ability to recognise stored information when it is seen.

Participants consisted of male sixth-form students from Sutton Grammar School for Boys, aged either 16 or 17 years old. Students were recruited by asking them to participate on the day of the study whilst they were in the common room.

Cramming participants were given a sheet of information on either A-level biology, history or geography to read through until they were understood and were comfortable to move on. The reading time was around five minutes for most participants. The chosen subjects were used because these subjects were being studied by the researchers, so actual content and realistic tests could be easily devised. The learning session was immediately followed by two separate tests on the information that they had just read: a recall test (compromising of ten short answer questions), and a recognition test (compromising of ten long answer questions). Both recall and recognition tests were used because it has been found that performance can be changed depending on if the questions include a cue [9]. The recall test was given to participants before the recognition test to avoid participants obtaining answers for the recall test from the recognition test. The same tests were given to the long-term revision group, but they were not given the sheet of information beforehand. This group had taken the A-level subject they were being tested on for a year, and had recently had end of year exams, so would have been revising in the long-term.

Controls were in place to improve the validity of the results. This included that all the participants completed the studying and testing in silence. This would replicate a real examination setting, and would mean that the context of the learning and recalling was matched, which has seen to increase memory performance [9]. Additionally, some filler information was added into the sheet, so that the cramming group did not essentially have the answers. Moreover, this is more representative of a real exam because there will be content that students revise that does not appear in the test. It was also ensured that the cramming group had not studied biology, history or geography to the standard of knowledge that the tests require (A-level standard).

Qualitative data was collected in the form of the participants’ mannerisms whilst they were taking the tests. The data showed that the cramming group appeared to be more confused or stuck whilst reading the information and answering the tests. The mannerisms included looking around the room, having a confused facial expression, dropping the pen on the table, smirking and having a tone of giving up in their voices when they had finished.

From this data (displayed in graph 1), it can be concluded that in terms of storing and retrieving academic information, spaced long-term revision is more effective than cramming. Additionally, cramming is more effective for recognition testing compared to recall testing.

Overall, the results were as expected. Revision over a long period of time was seen to be significantly more effective for retrieving information, and is the most likely way for a student to achieve their best results. The finding that cramming was more effective for recognition memory compared to recall memory was also expected. The only future investigation which needs to be done is unpacking why these patterns are seen.

As previously mentioned, it is likely that information that is crammed is only stored in the short-term memory if it is not repeatedly studied [10]. Mckeown, Mercer, Bugajska, Duffy, and Barker (2019) stated that if information in the short-term memory is not rehearsed almost immediately, the neurochemical memory trace which stores it will quickly fade [11]. Long-term information on the other hand is very stable over time [3], which is possibly why long-term revision is more effective.

It is also questionable why students would choose cramming even when it is thought of, and seen to be less effective than long term revision. One simple explanation could be because cramming takes less effort and can show effectiveness. Cousins, Wong, Raghunath, Look, and Chee (2018) found that after a learning period, cramming information again at a later period caused better performance than taking a break [12]. Additionally, students could know that cramming is less effective but choose it because it is easier, takes up less time, and they believe they can still perform sufficiently using this method. Benjamin and Bird (2006) suggested that students will choose their revision technique based on the difficulty of the material, with harder material requiring more spaced revision [13]. Additionally, Sommer (1968) found that around two-thirds of students are dissatisfied with their studying methods [14]. This would mean that students may choose to cram not because they are unaware that it is ineffective, but because they find it difficult to implement other revision methods. Sommer also suggested that examinations often only allow for revision methods such as cramming due to the periods before testing causing disturbances of sleep, diet, and general body condition.

The present study also has some limitations which may impact the interpreted conclusions. For example, the sample in this study was volunteer based, and only included males. It may be the case that the people who volunteered were more enthusiastic about their studies, so were more suited to long-term revision than the average student. Additionally, female students may have produced different results. Voyer and Voyer (2014) found in a meta-analysis including various countries that girls have been achieving better grades than boys for decades, suggesting that performance could be different under each of the revision methods [15].

A strength of the study was that both quantitative and qualitative data was recorded. The qualitative data confirmed that the students in the cramming condition were finding the task difficult. Additionally, revision and test conditions were very representative of a real examination, providing strong ecological validity. However, the students in the long-term revision were actually taking the subject that they were being tested on, meaning they may have been more motivated compared to the cramming students to perform well on the test and gain an indication of their ability.

The results of this study are important because they show how students can perform better in examinations. It demonstrates how spaced long-term revision is more effective than cramming, even when the individual takes a break between revising and taking a test. There is also application for teaching, because it explains why students would need sufficient time to revise for a test, rather than given a short amount of time to cram a large amount of information.