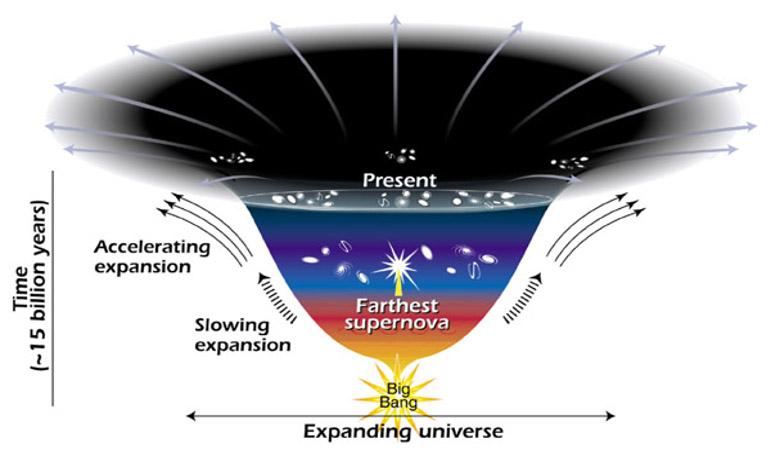 Did you know that a mere 5% of the universe consists of normal matter? This includes the atoms which make up all visible objects, ranging from cars and living organisms to even planets and stars. The other 95% contains dark energy and dark matter 1. But what exactly do we mean by these two intriguing terms? What is the difference between them?

Until the late 1990s, scientists had believed that the expansion of the universe was decelerating due to the attractive force of gravity. However, in 1998 a surprising discovery was made by calculating the speed at which distant supernovae were receding – the expansion of the universe was actually accelerating 2. This gave rise to the idea of dark energy, which supposedly exerted a repulsive force stronger than gravity and even stretched space slightly. Unfortunately, dark energy remains an idea shrouded in mystery because scientists are unsure of its nature and origin. Some believe that it is a fifth fundamental force, or “quintessence”, while others liken it to a more powerful version of Einstein’s cosmological constant (found in in the theory of General Relativity) – which was effectively the energy of empty space and supposedly counterbalanced the effect of gravity to attain a static universe 3. To add to the mystery, the expansion was actually found to be decelerating until about 7 billion years after the big bang, after which it started to accelerate for uncertain reasons 4 (figure 2). Dark energy is a significant concept because it may ultimately decide the fate of the universe. Scientists are unsure whether the accelerating expansion will continue forever, but if it does, it may lead to the Big Rip, which is the scary scenario in which acceleration will overcome the forces of attraction in the universe, resulting in all matter being torn apart. Alternatively, the accelerated expansion may cool the universe to such a level that heat ceases to exist, resulting in the Big Freeze.

Figure 2: The expansion of the universe

Dark matter on the other hand, exerts an attractive force like gravity. The idea of dark matter was first brought up by astronomer Fritz Zwicky (figure 3), who discovered that the combined mass of all stars in the Coma cluster was less than 1% of that required to keep its galaxies from escaping the gravitational pull of the cluster. Another astronomer Vera Rubin confirmed that orbital velocity – the minimum velocity required to keep a body in orbit – actually stays constant despite an increase in distance from the centre of a galaxy. This contradicted Newton’s law of gravitation which states that gravitation force is inversely proportional to the square of distance between two masses, leading to the conclusion that there must be another attractive force, one that is exerted by dark matter. Currently, there is even more evidence for the existence of dark matter because of observations in gravitational lensing, the cosmic microwave background, and galactic collisions, and its widespread acceptance is highlighted by the fact that it is a part of the standard model of cosmology 5.

Despite this, the nature of dark matter has not been fully determined as it does not interact with electromagnetic radiation. Hence it is called dark because it is not directly visible. But what we do know is that it is “cold” (has a low velocity) and is electrically neutral. Countless theories have arisen as to what exactly dark matter is. Many scientists believe that it may be composed of yet undiscovered weakly interacting massive particles (WIMPs). Others believe that a hypothetical particle known as an axion makes up dark matter. Gravitationally Interacting Massive Particles (GIMPs) and sterile neutrinos are the other main candidates. Non-sterile neutrinos cannot be dark matter despite sharing similar properties because they could only be “hot” dark matter, which travels close to or at the speed of light. However, there is considerable evidence suggesting there is no “hot” dark matter, principally because it would not adequately explain the formation of galaxies and clusters. Besides, there are even a few astronomers who reject the idea of dark matter completely, and instead insist on a concept called Modified Newtonian dynamics (MOND). This is based on the idea that gravity behaves in a different manner over long distances than over short distances. However, this concept has received a lot of criticism mainly because it does match observational data of galaxy clusters. WIMPs are currently the most popular explanation and there are several ongoing experiments to detect them, but so far none of them have been successful. Further research on dark matter is imperative as it can help explain the formation of galaxies and improve our understanding about the shape of the universe 6.

To conclude, dark matter and dark energy have similar sounding names, but are actually opposites: the former attracts whereas the latter repels. Additionally, dark matter impacts individual galaxies while dark energy acts on the universe as a whole. Moreover, dark energy is clearly more powerful as it is able to overcome attractive forces to cause accelerated expansion 7. The truth is we know very little about dark matter and dark energy despite them making up almost the entire universe. But there are numerous experiments being conducted around the world and scientists are optimistic about making a breakthrough in the following years.

Projects such as Dark Energy Spectroscopic Instrument (DESI) 8 and Euclid 9 aim to develop a better understanding of the role of dark energy in the expansion of the universe. Other experiments including LUX-ZEPLIN (LZ) 10 and SuperCDMS hope to detect WIMPs in order to gain a deeper insight into the nature of Dark Matter. Findings from such experiments are important as they can lead to a paradigm shift in cosmology. We have already seen a resurgence in the long-abandoned cosmological constant. What changes will dark energy and dark matter bring about in the future?

Yash Bharadwaj is a grade 11 student enrolled in the IB diploma curriculum at Greenwood High International School, Bangalore. He is passionate about math, physics, and engineering. He also enjoys playing the violin, reading action thriller books, and playing cricket.