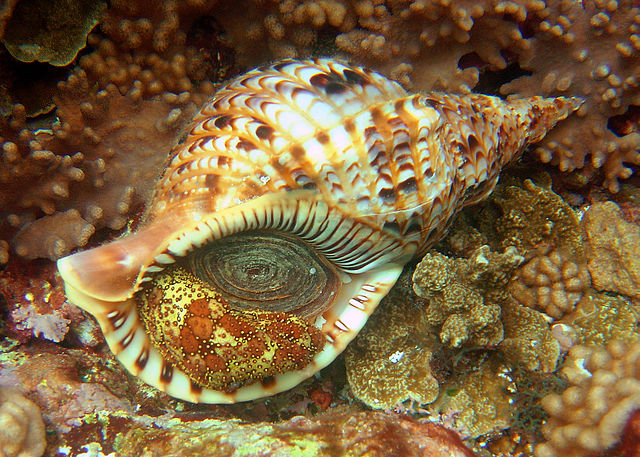 Even though a shell or a piece of coral on your mantelpiece may look pretty, the long-term consequences on the ocean and its inhabitants may be serious.

You may think that one small shell won’t make a difference, but with every shell taken from its natural habitat the surrounding environment could suffer. This is because the sea snails that inhabit these shells are often removed from them while they are still alive, and there are even instructional videos freely available on YouTube, such as one entitled ‘How to Remove a Conch Snail From Its Shell’ to encourage other would-be shell collectors to do the same.

This type of disruption to marine ecosystems is currently seen in many of the world’s coral reefs. Add to this behaviour the acidification and rising temperatures in our oceans brought about by global warming, and you have a man-made recipe for disaster.

The impact of harvesting shells and corals.

Sea shells are sold all over the world as ornaments or as souvenirs. This souvenir trade involves around 5,000 species of molluscs (bivalves, oysters and mussels with hinged shells and gastropods which include snails and slugs), but few academics have done research to explore the global environmental impacts of this industry. Around 68 percent of these molluscs are harvested from the Atlantic ocean [1], but many are also imported from Indo-pacific countries, such as the Philippines, which has also experienced a decline in marine biodiversity partly as a result of uncontrolled sea shell harvesting [2].

Coral harvesting or coral poaching; this is the confiscation of highly-valued coral species – in the case of coral poaching, coral is stolen from reefs protected as part of nature reserves or marine parks. This has a serious effect on the marine environment. Coral is used as ornaments, jewellery and sometimes even medicine, making the commodity a valuable one in marketplaces around the world. Corals also have a very important role in the marine ecosystem: they are the most diverse ecosystems on earth and provide a habitat to around 25 percent of all sea life, they protect the coastline from damage when there are tropical storms and they also help to recycle nutrients in the surrounding water [3]. Harvesting corals may cause these vital and beautiful ecosystems to become extinct, and this could mean that thousands of species of fish and underwater plants could become endangered or extinct with it as many of them are dependent on their shelter and safety.

One particular example of possible mollusc shell over-exploitation is the Charonia tritonis (a sea snail known as Triton’s Trumpet). They have impressive shells that grow up to two feet long and are harvested by people to be used as decorative objects or can also be modified and used as a trumpet. It is thought that this sea snail could be vulnerable to extinction and there are very few left.

Although no recent studies have been done, the species is in severe decline and they are generally regarded as uncommon on Australia’s Great Barrier Reef. In the years between 1947-1960 it is estimated that up to 10,000 were harvested annually by the crews of trochus boats [4].

The over-exploitation of Triton’s Trumpet could be a specific cause for regret if action is not taken for their protection. This huge sea snail is one of the few natural solutions available to solve a pressing problem – the control of crown-of-thorns starfish, or COTS (Acanthaster planci), an outbreak of which can lay waste to healthy coral reefs in a matter of days. In addition to their venom being highly toxic to humans, COTS eat corals for their nutritious polyps (algae that helps the corals survive), which in turn weakens the coral making it vulnerable to algae which soon infests and kills it. Each COTS can consume up to 6 square meters a year.

The Triton’s Trumpet is able to feed on COTS by ripping the venomous starfish to pieces with its sharp poisonous teeth.

This is why tritonis is so important to the environment. By protecting them, we provide another layer of protection for the world’s coral ecosystems and all that live in them.

Every ecosystem is unique and delicate, and the slightest change can upset the food chain and cause disaster. As an example, if there are too many COTS and too few Triton’s Trumpets the corals suffer, and as a result of that the reef’s inhabitants, including fish, molluscs and crabs, will also suffer.

As around 25 percent of all marine life depends on coral reefs most of their natural predators will probably suffer too. This could cause all marine life worldwide to die out.

As seafood is an important dietary component of many land-dwelling mammals and birds, this could affect other ecosystems on land and threaten other animals and plants in turn. This is why our oceans and all the life in them are very important to the wellbeing of humans and ultimately the whole world.

More research needs to be done on the effect of the souvenir shell trade on our environment. Given the importance of coral reefs, it is our duty to help and protect the animals that protect our corals in order for them to survive.

It’s not just down to conservationists – we need to act as individuals too. By refusing to take shells away from the coastlines or buying them when we go on holiday, we are recognising that they have a much more important job maintaining the balance of the ecosystem than sitting on our shelves collecting dust.

From an early age, Aayah has been fascinated with the ocean. She was selected to join the Save Our Seas Foundation Seychelles marine explorers programme in 2015, giving her the opportunity to get up close and personal with the inhabitants of some of the most beautiful coral reefs in the world – reefs which are under constant threat from climate change and coral bleaching.