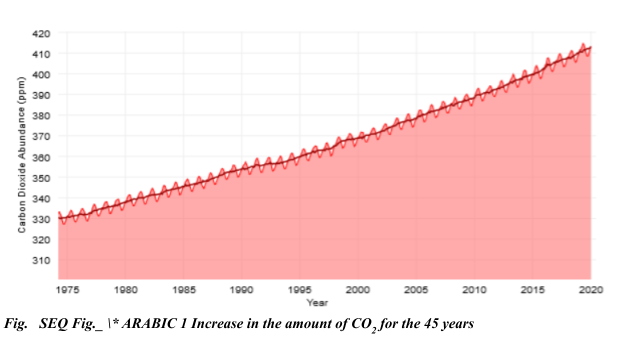 Climate change today is a leading problem with adverse effects to the life forms on Earth. In nature, plants play an important role in capturing CO2 from the atmosphere. Emulating plant photosynthesis for sequestering CO2 from small vehicles is a step towards combating climate change. The focus of this research is to efficiently sequester carbon with the help of photosynthetic algae – Filamentous algae (Pithophora).

The primary motive of this research is to perform carbon sequestration in a feasible manner. By designing capsules, it is possible to perform carbon sequestration in a compact and efficient way using algae. Urea was used as a source of nitrogen (nutrition) for the algae. It was hypothesized that the addition of urea results in a greater carbon uptake. At the end of the experiment, it was found that 4 grams of filamentous algae sequesters 36.5‰ of C 13, with 1.5 grams of Urea (CH4N2O).

This idea has potential benefits such as the fast release of O2 as a by-product of photosynthesis. This natural way of performing carbon sequestration, does not require industrial processing making it easy to procure and economically viable. The toxicity of vehicular exhaust can be reduced by incorporating this idea into a machine. This machine could be fitted into vehicle exhausts, thereby reducing air pollution.

In the aftermath of the industrial revolution, emissions from factories have created a “heat-trapping” layer in the atmosphere. This layer primarily consists of excessive amounts of greenhouse gases such as Carbon Dioxide (CO2), Methane (CH4), Nitrogen dioxide (NO2) and Chlorofluorocarbons (CFCs). This results in a consequent rise in temperature which drives global warming. For the past 45 years, until 2020, there has been a significant increase in the amount of CO2 (approximately 85 ppm) in the atmosphere [1] (Fig. 1). Over the course of the 21st century, data suggests an average global temperature rise of 1.4°C in the lowest emissions scenario and 2.2°C in the highest emissions scenario. Today, there is an extensive loss of habitats and sensitive creatures living within them. On the whole this disturbs the fine balance of Carbon cycle.

Approximately, 12% of the emissions from a gasoline car consists of CO2 (Fig. 2). This large amount of CO2 is undesirable as it worsens the effect of climate change on our planet. Therefore, carbon sequestration is a useful method for combatting this problem. It is a natural or artificial process by which carbon dioxide is removed from the atmosphere. Renewable energy sources like solar and wind energy cannot completely replace fossil fuels. However, it could be possible to reduce carbon emission significantly using carbon sequestration while continuing to use fossil fuels.

Towards this goal, researchers are working on ‘carbon-sink’ for removing carbon-dioxide from the atmosphere. Proposed methods include direct removal of CO2 from the atmosphere and indirect methods such as capturing/sequestering CO2 by means of planting trees and other similar measures.

Photosynthesis performed by certain autotrophs offer an optimal indirect (natural) method for carbon sequestration. In this process, plants and many strains of algae take in CO2 from the air and release O2 as a clean by-product.

This study involves the efficient sequestration of carbon with the help of photosynthetic algae. This also results in the utmost useful conversion of CO2 into clean O2. The reason for using algae is its miniature size, enabling photosynthesis to occur in a compact environment.

Some attempts have been made to deploy a natural process for sequestering carbon. Ohio University’s Coal Research Centre, has developed an apparatus with photosynthetic cyanobacteria[3] to sequester carbon from factory emissions. However, the use of algal photosynthesis for sequestering carbon from vehicular exhaust in a compact and economically viable manner is the original research being pursued in this submission

The hypothesis being researched in this paper is the usage of filamentous algae with addition of urea results in increased carbon uptake.

In this research, the type of algae known as Filamentous Algae (Species: Pithophora), was used due its easy availability, making it economically viable. Filamentous algae commonly grow in the bottom of ponds and range in colour, from lime green to a dark green-brown [4]. They form layers on the surface during warm seasons. They produce buoyant gas bubbles which help them float. Moreover, this type of algae has fast growth rates when given appropriate nutrients. When this algae multiplies rapidly it produces significant amounts of oxygen, making it an oxygen dense algae. In this case, the quantity of filamentous algae increases 2 times every week with 1.5g of Urea under lab conditions. The above qualities make this kind of algae a good candidate for carbon sequestration.

The aim of this research project was to detect the optimal condition in which the algae would grow and, subsequently, sequester carbon most effectively. The procedures performed during the investigation were:

Measurement of CO2 content in the environment of the algae versus the amount of CO2 sequestered by algae was used as the principle to determine CO2 uptake.

During the investigation, four samples of filamentous algae were procured from a small pond. Each sample contained 4g of filamentous algae, and urea was added as a source of nutrition. It was hypothesized that the addition of urea results in greater carbon uptake. Each sample had different amounts of urea- 0g in the control group, 0.5g, 1g, and 1.5g. These samples were cultured for 1.5 months. They were then transferred into sealed bottles to measure the C13 uptake by the algae, in the fixed volume of air in the bottle. With the help of a syringe, the CO2 deprived air was captured and transferred into vials. The vials were placed in the gas bench of the mass spectrometer and decontaminated. Seven vials were taken – two blank vials, one standard vial (a reference point containing a mixture of phosphoric acid and calcium carbonate) and four sample vials. The standard vial was placed into the oven for 40 minutes to hasten the reaction of the two chemicals. The seven vials were then placed into the gas bench for analysis by the mass spectrometer.

The data obtained from the mass spectrometer was used to determine the concentration of Carbon-13 sequestered by the algae. A higher concentration would mean more effective carbon sequestration.Results

The data obtained from the mass spectrometer, is presented below in tabular (Table 1) and scatter-plot form (Fig 4). It depicts the amount of C13 uptake by the fixed amount of algae corresponding to the amount of urea added to each sample.

Fig. 4 Amount of C13 sequestered by respective amounts of urea

A direct analysis of the data shows 0.7 grams of Filamentous algae sequesters the maximum amount of 36.5‰ of C 13, with 1.5 grams of urea. This is a step closer to the goal of feasible carbon sequestration.

By the nature of photosynthesis, it is known that the carbon uptake of filamentous algae is non-linear and at the stationary phase, the organism halts the absorption of CO2. The reason for this phenomenon is that a large amount of CO2 absorption above a certain threshold would result in the intoxication of algae. As a result there is a saturation point in the Carbon uptake by the algae. Managing this aspect of carbon uptake by controlling the algae growth in stages can result in successful carbon sequestration. The next step is to design a device which achieves this.

The hypothesis was proven to be true by conducting the experiment and measuring the carbon uptake using a mass spectrometer.

Algal growth control in stages can be achieved by alternating photosynthesis reactions across the algae sheets.

Various other strains of algae can be tested for their respective carbon uptake in reference to the amount of CO2 produced by small vehicles. This could potentially allow for implementation of the above device.

I would like to acknowledge Prof. Dr. Prosenjit Ghosh for providing the opportunity to work on this project under his guidance at the Centre for Earth Sciences, IISc. (Indian Institute of Science), Bangalore, India. I would also like to thank Ms. Divya Mishra for assisting me, and Dr. Tarun Choubisa, Dr. Sneh Deep, Mr. Shriram Bharathan, Dr. Francisca Kalavathi and Mr. Sudarshan R for their support and guidance.

Images are from Google and by Shankar N. Subramaniam

Shankar is a Grade 9 student at Silver Oaks International School, Bangalore, India. He is deeply interested in Environmental sciences and STEM areas. He has taken AP level courses in Math, Physics, Chemistry and Biology. His interests led him to an internship at the Centre for Earth Sciences, IISc., Bangalore, India. He aspires to work towards providing a better and greener future for generations to come.