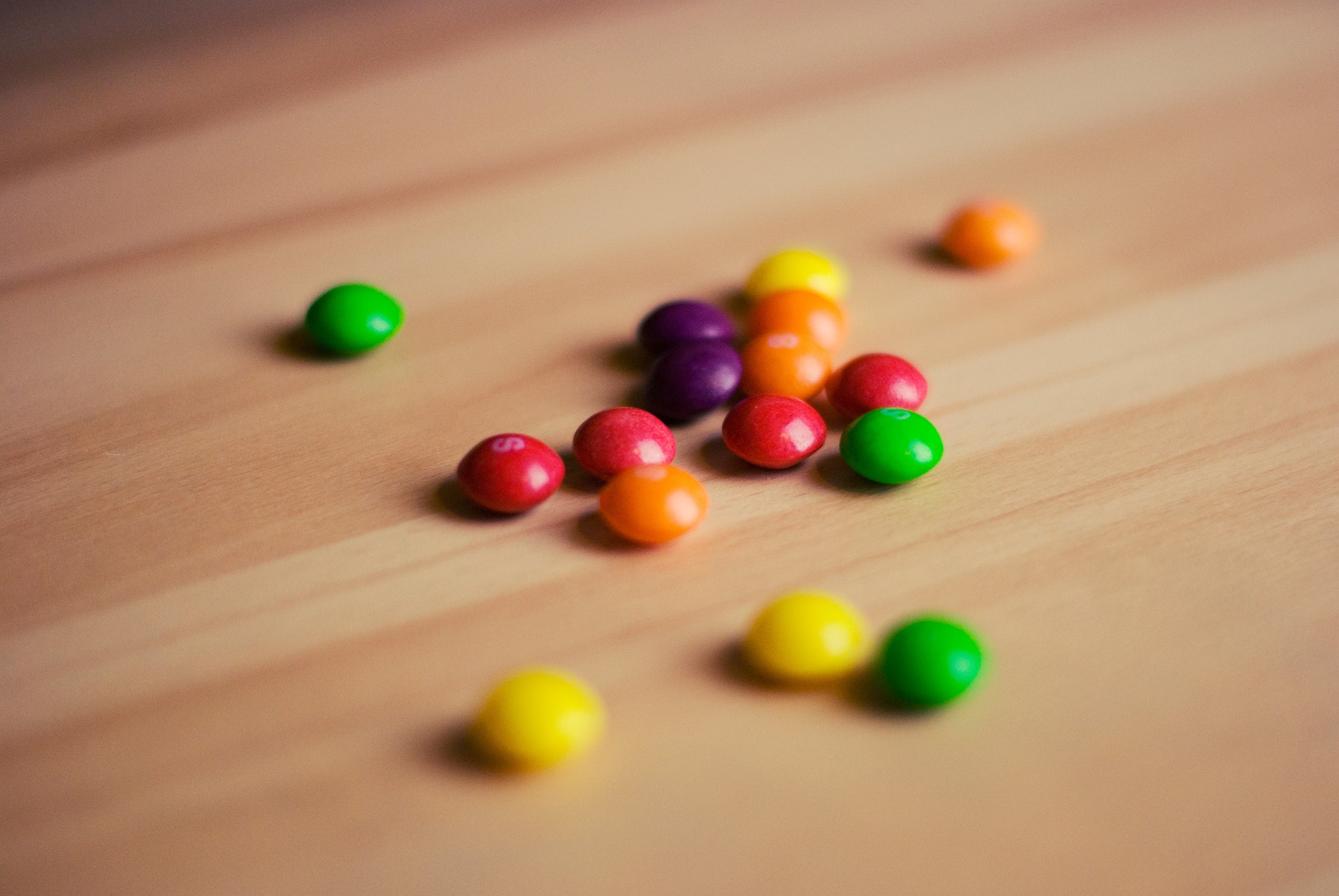 Bar none, all living organisms have to eat. Taste is the fundamental sense involved in eating, along with touch: which we use for analysing the texture of the food. However, is sight also involved along with touch and taste? Does red indicate strawberry? Does yellow indicate banana or lemon? This study looks at how humans interpret the flavours of food and whether humans can envisage what flavour a particular food might have. The results show that we are influenced by what we see and when the sense of sight is removed, the precision of what humans taste is somewhat shattered.

Skittles are a brand of sweets that are fruit-flavoured and are currently produced by the Wrigley Company. They were the main variable in this experiment. There are five different flavours in the Original Fruit Skittles, which are the ones used in the experiment (see below). The flavours of the sweets are produced by the insides of the skittle, which are made from sugar, corn syrup, hydrogenated palm kernel oil, fruit juice, citric acid, and natural and artificial flavours. The five different flavours are:

This experiment looks at whether the flavours can be interpreted when the subject of the experiment has had his/her sight removed (this was done using a blindfold). Skittles are easy to acquire and can be sourced from any supermarket, sweet shop etc.

Humans taste food using their taste buds which have microscopic hairs called microvilli. These are sensitive to flavours and are located inside the minuscule bumps on the human tongue know as papillae.

This experiment looks at whether the eyes influence the sense of taste. All flavours are represented by a colour and this is found in more than just skittles. When a food does not have the appropriate colour, humans are confused by what they see. For example, if a quantity of chips were blue in colour, the chips are suspected to be mouldy and to have grown bacteria on them.

The suspected outcome of this experiment is that we are influenced by what we see when eating foods, as humans see things before they eat them. Moreover, humans are known to make assumptions and the brain makes assumptions about how things taste by the colour and the condition of foods.

Several studies have been conducted that are similar to this experiment and some are shown below.

The Journal of Food Science [1]: researchers found that people were confused when a drink did not have the appropriate colour. A cherry flavoured drink was manipulated to be orange in colour and was thought to be of orange flavour. The same flavour drink, this time green in colour, was thought to taste like lime.

Fast Food Nation [2]: subjects in this experiment were served what appeared to be a normal looking plate of steak and chips. The room was installed with special lighting that changed what the colour of food looked like. Under this lighting effect, the food tasted fine to the subjects. The lighting was then returned to normal and it was revealed that the steak was dyed a blue colour and the chips were dyed green in colour. After seeing this, the majority of the subjects lost their appetite and then some claimed to be ill.

People of ages between 11–15 and adults of working age were asked to come and try skittles. This was done verbally and by the distribution of propaganda, such as posters. The experiment took place at Bolton School Boys’ Division; the sample group consisted of boys and staff. Each subject was asked some questions; name, ethnicity and age – this was to look at whether people of different ethnic origins could guess the flavour of the food more accurately than others.

Next, the subject was blindfolded and given a skittle that was selected at random (eg; strawberry/red). The subject’s guess as to what flavour the skittle was, the actual colour of the skittle (i.e. blue) and some adjectives about the taste and after-taste were recorded. We did this again with the same colour skittle, however this time the subject was not blindfolded and allowed their sense of sight. The subject’s answers were recorded again. Doing it without the blindfold meant that we had a control.

At the end, there were 56 completed questionnaires and the subjects ranged from boys between the ages of 11 and 15 and teachers of working age. In hindsight, a larger sample group would have been better. Both genders were covered but the only female subjects were adults.

Below (figure 1) is a sample survey that was conducted during the study.

Overall, 56 subjects were tested, 47 of which were boys between the ages of 11 and 15, and 9 of which were teachers of working age. With regards to ethnicity, no pattern was found with these results so it is not a relevant factor. Below is a table (figure 2) that shows how many subject guessed correctly while blindfolded and while not blindfolded.

This raw data here can be shown in a bar chart (figure 3) showing the percentage of subjects that guessed correctly both times.

These results were as expected and supported the hypothesis. The reasoning for this is that if you take away one of the senses it becomes considerably harder to do things as the senses are all intertwined. These results also match the other studies similar to this.

The relationship between the variables shows that when blindfolded the difficulty of guessing the flavour of a skittle is considerably harder. Some of the results were anomalous and this is due to the fact that either the person in question had an extreme predilection for skittles and knew what each flavour tasted like, or the fact that there is a 20% chance of guessing correctly.

Humans require sight to interpret the flavours of food and this theory is supported by this study. This study suggests that mostly humans cannot recognise a flavour of food whilst blindfolded. However when a human has his/her sense of sight, the interpretation of flavours becomes much easier. This is because the human brain makes assumptions, using its sense of sight, when predicting the flavour of food. Results show that when the subject is blindfolded it is considerably harder to determine the flavour of a skittle.

William is attending Bolton School Boys’ Division. He play the Piano and the Organ. He has a keen interest in the sciences especially Physics, he also likes electronics. In his spare time William loves to climb mountains all around the UK.

One thought on “Does the Colour of a Sweet Influence the Taste Buds on the Tongue?”