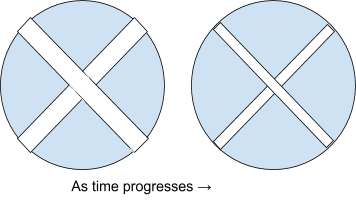 Antioxidants are often recommended by nutritionists and clinicians with the understanding that antioxidants should slow down cancer formation and progression. However, the evidence regarding the efficacy of antioxidants on the incidence and prognosis of cancer are mixed. The aim of the present study was to determine the effect of antioxidants, N-acetylcysteine (NAC) and α-tocopherol (Vitamin E), alone or in combination, on colorectal cancer cell invasivity using a wound healing (scratch) assay. SW-480 colorectal cancer were cells cultured and plated, and the cellular monolayer was injured. Thereafter, cells were treated with media alone, media containing α-tocopherol (60µM) or NAC (600µM), or a combination of equal parts of, α-tocopherol and NAC (300µM and 30µM, respectively). Wound closure was assayed at baseline and at 24, and 48 hours after treatment and percent wound closure was determined from baseline. After 48 hours wound closure was significantly greater in the α-tocopherol + NAC (90.1±12.7 %), but neither the α-tocopherol (41.2±3.9 %) nor NAC (28.9±5.8 %) alone, compared with control (29.8±2.6 %). Additionally, the α-tocopherol + NAC condition demonstrated significantly greater wound closure at both 24 and 48 hours compared with untreated condition. These data indicate that α-tocopherol + NAC considerably increase colorectal cell migratory capacity in vitro. An increase in cancer cell migratory capacity due to NAC and α-tocopherol would provide mechanistic insight into the influence of these antioxidants on cancer cell malignancy.

It is a commonly held belief within the general public that the benefit of antioxidants is directly related to the dose, and high or extreme doses of antioxidants are highly protective against the progression of cancer. In effect, high doses of antioxidants are protective against reactive oxygen species (ROS) mediated cellular damage, dysfunction and the development. Under physiological conditions reactive oxygen species act as secondary mechanisms by activating modified signaling proteins involved in cellular homeostasis, proliferation and survival.[1] However, excess ROS production can overwhelm endogenous buffers resulting in DNA damage, uncontrolled cellular proliferation, cellular dysfunction and cancer development.[1][2] Teleologically, antioxidant supplementation would bolster endogenous ROS buffering systems thereby reducing the risk of DNA damage, mutation and cancer development. However, the pre-clinical and clinical data on the benefits of antioxidant therapy are mixed, with several studies demonstrating that antioxidant therapy increases the risk of cancer development and the efficacy of therapeutic interventions.[3] For example, a study by Rautalahti and colleagues (1999) demonstrated that α-tocopherol (or Vitamin E which in addition to being an antioxidant is needed by the body to boost the immune system and widen blood vessels to keep blood from clotting within them[4]) increased the incidence of pancreatic cancer in adult male smokers.[5]  Additionally, a study by Le Gal et al., (2015) published in Science Translational Medicine specifically found that the antioxidants N-acetyl-L-cysteine (NAC) and  α-tocopherol (Vitamin E), when used separately, increased the incidence of melanoma metastases in both in vitro and in vivo measures.[6] Therefore, it is important to characterise the influence of antioxidants, alone and in combination, on cancer cell homeostasis and proliferation.  Accordingly, the current study was designed to examine the effects of NAC and  α-tocopherol, both separately and in combination on cancer cell invasiveness in the SW-480 line of colorectal cancer cells as measured by the common scratch assay.

For cell treatment, 20µL of NAC or 2µL of α-tocopherol was dissolved in 200µL of DMSO and then in RPMI (Sigma-Aldrich, St. Louis, MO) at a final concentration of 600µM and 60µM respectively. Cells not treated with antioxidants were treated with the vehicle medium alone.

The American Type Culture Collection (ATCC, Manassas, VA) provided the human colorectal cancer SW480 cell line. The cells was maintained in L-glutamine and sodium bicarbonate, liquid, sterile-filtered medium, (RPMI-1640) supplemented with 10% fetal bovine serum (FBS) in a humidified atmosphere of 5% CO2 at 37°C. Cells were seeded at a concentration of 2.5×103 cells/well in a 12-well plates (ThermoFisher, Waltham, MA) and incubated for 24 hours at 37°C in 5% CO2. After incubation, SW480 cells were treated with 10 and 20 µM naphthazarin for 24 hours. Following incubation, the SW480 cells were placed in a well with 200 µl DMSO with media and agitated for 20 min at room temperature. Cell viability was verified using an ELISA reader at a wavelength of 490 nm.

The scratch assay is a simple method to study cell migration in a non-invasive manner.[7] A new artificial ‘gap’, or a ‘scratch’, is created on a confluent cell monolayer, the cells on the edge of the newly created gap will move outwards to the empty space to close the “scratch” until new cell to cell contacts are re-established.

The rate of cell migration can be determined by the creation of a ‘scratch’ on monolayer cells (Figure 1), and subsequently capturing images at the beginning and at regular predetermined intervals, during cell migration, followed by a comparison of size of the ‘gap’ in the images. This method of cell migration mimics to a large extent the migration of cells in vivo.

SW-480 colorectal cancer cells were grown in 12 cell plates, until until cells covered almost the entirety of the well surface was reached. After 24 hours, the cellular monolayer of the confluent cell sheet was scratched with a 200μL pipette tip (Gilson Pipetman)  in the form of a cross. The RPMI-1640 medium was then replaced in each well with 500 µM of Hank’s balanced salt solution (HBSS) to wash and clean off any remaining medium and any detached cells. Thereafter cells were treated with media alone or media containing 600µM NAC, 60µM α-tocopherol or 300 µM NAC and 30 µM α-tocopherol.
Wound closure was assayed at baseline, 24 hrs, and 48 hrs after treatment and percent wound closure was determined from baseline.
Progress cell images were taken using an Axiovert 100M microscope with ×63 Oil-FLUAR lens (Zeiss, Oberkochen, Germany) and a ORCA II ER camera (Hamamatsu Photonics Systems, Hamamatsu City, Shizuoka, Japan) at  0, 24, and 48 hours after treatment and cellular migration was quantified using ImageJ, an image analysis computer program used to determine the distance between opposing scratch borders. To account for variance in closure within a single scratch, wound areas from individual images are measured at multiple locations to obtain an average value for migration rate. The percent of wound closure (%) was determined using the following equation where D=distance between scratch edges [(Dt = 0 h – Dt = Δt h)/D t = 0 h] x 100%.[8]

Differences between treatments were determined by analysis of variance (ANOVA). Where indicated by a significant F value, Bonferroni post hoc tests were performed. Data are reported as mean±SD for 3 independent experiments. Statistical significance was set a priori at P<0.05.

A scratch assay was conducted with human colorectal cancer cells over a period of 48 hours, treated with different media. Table 1 visually demonstrates the magnitude of cell migration in each media condition as time progresses.

Table 1: Representative images from scratch assay at 0 hours, 24 hours and 48 hours after injury (n=3). SW480 cells were grown to confluence in 12-well tissue culture plates. Cell monolayers were wounded with 200µL pipette tip and then treated with media alone or media containing NAC, α-tocopherol, or NAC and α-tocopherol. Photographs taken by author.

The novel finding of the present study is that, in combination, α-tocopherol and NAC significantly augment colorectal cancer cell migration in vitro. Cancer cell migration in vitro is directly related to the pathological propensity of cancer to proliferate, remodeling tissue, and metastasises in vivo.[9] Interestingly, the cells treated with a combination of NAC+ and α-tocopherol is substantially more invasive than the cells simply treated with NAC+ or α-tocopherol alone despite receiving a two-fold higher dose of each antioxidant.  However, cells treated with α-tocopherol did demonstrate modestly enhanced migratory capacity compared with control cells, however this was not statistically significant (p=0.09, n=3). NAC appeared to have little or no effect on cell proliferation and migration over control cells. Indeed, these findings indicate that antioxidant therapy substantially augments the migratory capacity of colorectal cancer cells. These findings complement and extend the results of previous studies, such as that of LeGal et.al5, which have found that antioxidants, when used individually, can accelerate tumor metastatic activity and invasiveness.[6][10][11] These results build upon the aforementioned studies by using the antioxidants NAC and α-tocopherol together, and it was found that when combined, NAC and α-tocopherol had a stronger observable effect in increasing the invasion of the colorectal cells than the individual antioxidants per se. This increased activity may be due to antioxidant action of  blocking downstream RhoOA signaling whereby increasing cell migration and invasion.[5] However, the exact mechanism underlying the effect of NAC and α-tocopherol observed herein is not clear at this time.

There are some experimental limitations which deserve consideration. Despite rigorous sterile technique and a lack of contamination across all experiments, some of the monolayer injury patterns were less clear than others. Non-uniform injury patterns made the determination of cellular migration between the treatment conditions more difficult.  This study provides the rationale for future studies aimed at investigating the exact mechanisms through which NAC and α-tocopherol enhance colorectal cancer cell migratory capacity and to investigate the effect of NAC and α-tocopherol on colorectal cancer pathophysiology in vivo.

Shruthi Shyam is a Senior at Notre Dame high school. She has gained research experience at leading genomics labs and at Brown University. She has presented papers at American Geophysical Union and at Synopsys State Science Fair. She has been involved in New York Academy of Science’s Junior Academy and currently serves as a board member on the youth advisory board for Stanford’s Headspace.