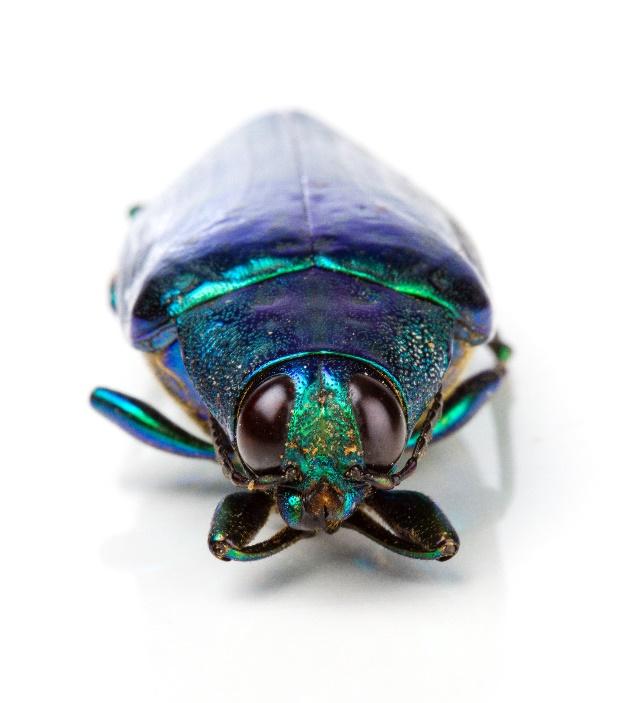 The permanent effects of heat on the structure and colour of the iridescent Chrysochroa wallacei beetle were investigated by heating its wing cases (elytra) to temperatures up to 500°C. Scanning electron microscopy (SEM) was used to detect changes in the structure of the elytra as a result of heat treatment. Spectral data indicates that heat treatment causes an exponential decrease in the wavelengths of colour peaks of C. wallacei elytra, but also a change in relative intensity of colour peaks. The changes in colour are thought to be due to protein denaturation and a resultant change in structure.

Colour is how certain sections of the electromagnetic spectrum are perceived, and the waves called visible light have a wavelength between roughly 400 and 700 nanometres. Usually, a surface appears to have a colour due to pigments in the material, which are molecules that absorb certain wavelengths of light and reflect all others. Chlorophyll for example is the molecule in plants that absorbs all wavelengths of visible light except the green wavelengths, which are reflected and observed by us.

Iridescence, however, is not due to pigmentation but structure. Iridescence is the property of surfaces that change colour when observed from different angles, meaning that iridescent surfaces reflect different wavelengths of light at different angles. Iridescence occurs when a layer of oil on water is viewed from different angles, and iridescence also occurs in animals such as the Chrysochroa wallacei beetle (Figure 1). There are plenty of theoretical evolutionary advantages of iridescence for animals, such as recognising members of the same species or a potential mate. Maybe even to scare predators, or to lure prey.[1] In addition, there are manmade applications of artificially produced iridescent structures, such as the theoretical concept of surgical threads that change colour when experiencing varying degrees of tension.

Figure 1: The Chrysochroa wallacei beetle has iridescent multilayer reflectors, giving it green-blue colours depending on the angle of view. Notice the two large wing-like elytra on the back of the beetle (Photograph by Duncan Armour).

Figure 2: A simplified multilayer reflector. The repeating layers have refractive indices n1 and n2, and thicknesses d1 and d2.

Figure 3: Constructive and destructive light interference is determined by the phase difference between two waves, i.e. how much in line they are.

Figure 4: The spectrum of light reflected off a mainly blue multilayer reflector. The wavelength of the most intense peak of a spectrum is called wavelengthmax (or λmax), which in this case is about 500 nm, but there are other smaller peaks too. The corresponding spectrum of colour is in the background.

Here are spectra of light reflected off the multilayer reflector of a C. wallacei at different angles:

Although this is not clear in Figure 5, the wavelength peak (λmax) is changing as the angle of incidence is increasing. Therefore there is a change in colour at different angles, hence iridescence. This relationship is clearer when plotting λmax versus angle of incidence (Figure 6).

Figure 6: The wavelength peak of a C. wallacei at 10°-20°. This graph shows a change in colour at different angles and therefore iridescence. The gradient of the line of best fit is spectral richness.

Figure 6 displays an apparent linear decrease in the wavelength of the main colour of the C. wallacei elytron as the angle of incidence increases, and this blueshift confirms that the beetle is iridescent. This relationship is not actually linear but normally distributed, though this is not noticeable within such a narrow range of angles.[3] As the relationship is so close to linear within this range (usually R2>0.90), a line of best fit can be produced using linear regression. The gradient of this line (with units nm/°) will be an estimate of how much the colour changes as the angle of view changes, and is therefore a measure of iridescence. This measure is called the spectral richness.[4]

The bright green Chrysochroa wallacei beetle (Figure 1), native to Malaysia, is the species that was studied in this investigation. The beetle has multilayer reflectors covering its whole body, including its elytra (wing cases). The two alternating layers of the C. wallacei’s multilayer reflectors are thought to be air and chitin.[4] Chitin, which plays important structural roles in insects, is a strong polymer similar in structure to cellulose, because its monomers are derivatives of glucose. The multilayer reflector of the C. wallacei is thought to have approximately 20 alternating layers of air and chitin, and is located on the outside of its body, which is why this beetle looks so metallic.[4]

Because the elytra of beetles are the easiest part with which to experiment, only the elytra of the C. wallacei were used in this investigation, and colour was recorded using the set up shown in Figure 7. Elytra of C. wallacei specimens were removed and cut in half, with their spectra recorded at different angles. To collect that spectral data, a light source (Ocean Optics HL-2000) was shone on a piece of elytron and the reflected light was recorded using a spectrophotometer (Ocean Optics USB-650). A spectrophotometer is a device that goes through different wavelengths of light and measures the relative intensity of each wavelength, and the spectrophotometer in this investigation had a range of 350-1000nm. This spectrophotometer was connected to a computer and produced graphs such as in Figure 4 and Figure 5 using Spectrasuite software. A goniometer, a device which measures angles accurately, was used to measure the angle between the light source and the spectrophotometer, hereby allowing the angle of incidence to be measured. The angles at which spectra were collected were from 10° to 20°, in increments of half a degree.

Using a glass kiln (Kilncare Hobbyfuser 3), elytron pieces were heated at a rate of 1000°C/hour, held at the desired temperature for 30 minutes, then left to cool to room temperature within the kiln. The elytron pieces were then removed and left for at least two hours before the collection of spectral data in order to minimise the recording of possible short term effects of heat treatment.

Using an SEM (Hitachi, Tabletop Microscope TM3030) from St Paul’s School in London, changes in structure of elytron pieces due to heat were attempted to be detected. Four elytron pieces were heated to 300°C, and four pieces were untreated. All elytron pieces were freeze-fractured with liquid nitrogen in order to leave the multilayer reflector intact, then gold coated by sputter deposition (Emitech K575X) in order to improve the quality of the electron micrographs.

Below are several of the SEM images, and more are available on the Beetles website (www.beetlesproject.weebly.com/images).

Figure 11: Close up of multilayer reflector of normal elytron.

Figure 12: Cross section of heat treated elytron, with the right side showing the multilayer reflector.

Figure 13: Surface of normal elytron, including a blocked pore on the top left. Notice how the surface consists of hexagons.

Figure 24: The change in wavelength at which the original colour peak occurs after heat treatment.

Figure 25: The spectral richness (measure of iridescence) before and after heat treatment for the elytron pieces.

As shown in Figure 10, normal elytron pieces were generally not freeze-fractured in a way that would leave the cross-section of the elytra intact, whilst heat treated elytra usually had clean cuts (Figure 9, Figure 12). This may be down to heat treated elytra being more brittle due to the denaturation of structural proteins. Therefore, changes in elytral structure due to heat were difficult to establish. A possible solution is to submerge the elytra in liquid nitrogen for longer before cleaving them.

There appeared to be a decrease in the thickness of the multilayer reflectors after heat treatment, though more data would need to be collected to confirm this. Multilayer reflectors are shown in Figure 11 and Figure 12, though the layers are so thin that they are not distinguishable.

Figure 13 and Figure 14 suggest that there is no significant change in the surface morphology of elytra after heat treatment, meaning that changes in structure due to heat are probably internal.

where a and b are the alternating layers in the reflector, n is the refractive index, and d is the layer thickness.[7] According to this equation, a decrease in thickness in one of the types of layers, which for the heat treated C. wallacei elytra could be the air layers, will result in a decrease in the wavelength of the colour peak (i.e. there is a blueshift). As the blueshift appears to be exponential (Figure 24), the denaturation of structural proteins in elytra could be exponentially related to temperature.

This investigation has shown that multilayer reflectors can change colour due to external variables, in this case heat, and there are therefore potential applications for this structure. For example, it could be artificially produced and used as an alternative to the conventional thermometer, with colour being the indicator. Industrially, heat could be used to determine the colour of surfaces that are covered with multilayer reflectors.

For a more in-depth write-up and more data of this investigation, please visit www.beetlesproject.weebly.com/papers