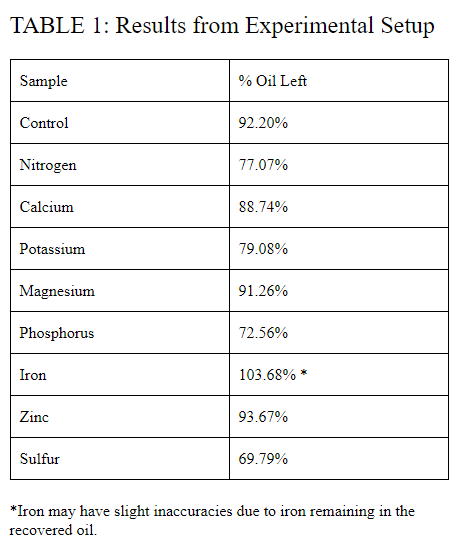 Wireline services company is often used in oilfield drilling operations. Proving tools that can measure the pressure of fluids, as well as detect other types of materials like methane gas and minerals that might be present deep underground.

Oil pollution in oceans is a major threat to the health of marine life and humans, as well as to coastal shores and groundwater supplies. Because the natural degradation of hydrocarbon chains found in spills is slow and anthropogenic catalysts pose environmental consequences to marine life, researchers have looked towards bioremediation, which uses natural microorganisms to reduce the impact of oil spills, as an effective and safe mitigation strategy. Through a preliminary experiment, it was found that nitrogen, phosphorus, potassium, sulfur, and calcium were most effective in stimulating microorganisms, and they were combined to make a powder fertilizer. Agar, a binding agent that slowly releases nutrients for microorganisms while preventing overgrown algae, was combined with the nutrients to make a slow-release fertilizer, which was then compared to the powder fertilizer through an experiment measuring the amount of oil remediated. The agar-based fertilizer outperformed the powder fertilizer group and proved to be an effective and long-lasting solution to accelerating ocean oil remediation. Applicable in fields like agriculture, environmental clean-up, and horticulture, agar-based fertilizers can be used effectively and safely as a slow-releasing agent, and further studies analyzing the composition of the oil before and after implementing fertilizers can prove useful.

With over 4.9 million liters of petroleum spilled into U.S. waters alone [9], pollution in oceans is a major threat to the health of marine life and humans [5]. Left by itself, chemicals in the ocean and the sun are able to break down some of the hydrocarbon chains found in oil spills, but often those that remain can still cause damage to coastal shores and contaminate groundwater supplies. In order to catalyse the degradation process, chemical dispersants have proved to be useful; however, this controversial method poses unknown environmental consequences to marine life [2]. Other methods like in situ burning or the usage of booms and skimmers also have their own environmental disadvantages, and their effectiveness is unpredictable [4].

To avoid the slow natural process of cleaning up oil while keeping in mind the environmental impacts of anthropogenic methods, researchers have found that bioremediation, which uses natural microorganisms to reduce the impacts of toxic oil, is an effective and safe way of cleaning up harmful oil spills [1].

B. The Role of Agar

Using agar in fertilizer as a binding agent helps slowly release nutrients inside the fertilizer and allows the nutrient supply to be used gradually by microorganisms. The slow and steady release results in a longer lasting fertilizer, while avoiding an oversaturation of nutrients that can lead to overgrown algae. An agar based fertilizer is used in the experiment to test its long term effectiveness in ocean oil remediation compared to a powder fertilizer.

Past research and work have shown that bioremediation and the stimulation of microorganisms are beneficial and effective in reducing the amount of harmful hydrocarbons and speeding up the oil clean up process [1, 8]. Agar has been used in soil fertilizers as a slow releasing agent and has been proven to be effective [6].

The average amount of oil remediated in the seawater samples containing the agar based fertilizer will be higher than the ones containing conventional powder fertilizer. This is because using agar as a binding agent will slowly release the nutrients to feed microorganisms and thus enhance microbial growth and the rate of remediation.

After collecting seawater samples from Half Moon Bay, the first part of the experiment was to determine which nutrients were best for bioremediation. These were to be selected from epsom salt (Mg), calcium carbonate (Ca), zinc gluconate (Zn), monoammonium phosphate (P), potassium chloride (K), ferrous sulfate heptahydrate (Fe), ammonium sulfate (N), and methylsulfonylmethane (S), based on established research [7, 8, 10]. Including a control sample, a total of nine jars were filled with 250 mL Half Moon Bay water, 21.25 g canola oil (a non toxic substitute for crude oil), and 0.5 g of the element to be tested. Every 3-4 days, the jars were aerated by pumping air using a homemade pump built out of PVC pipes and straws in order to simulate a real ocean environment.

After 14 days, the amount of oil left in the individual jars was measured by freezing the samples and then pouring the oil out. An oil absorbent cotton pad [3] was used to wipe off and recover excess oil and its final mass was measured using a scale (accurate to 0.01 g). Each element was experimented with 3 times, each with their own control group. The elements with the least amount of oil left (nitrogen, phosphorus, potassium, sulfur, and calcium) were selected as shown in Table 1 to be incorporated into the agar-based fertilizer and used in the final experiment.

B. Experimentation with the Agar Based Fertilizer

Three categories (control, an agar based fertilizer with the 5 best elements, a powder mixture of the 5 best elements) were experimented with over a 15 week period. The agar based fertilizer was prepared by mixing 4.5 g agar with 0.1 g of N, P, K, and S each and 0.05 g of Ca in 300 ml of purified water and then heated to boil for 6 minutes. The mixture was poured into a pyrex dish (sterilized with alcohol) to reduce to room temperature and then afterwards refrigerated for one hour. The mixture is then cut into 10 pieces, one for each jar. Using the same measurement method as the first experiment, the amount of oil left was recorded every 3 weeks for all three categories. Starting with 10 jars for each category, every 3 weeks, 2 jars from each category were measured for a total of 15 weeks.

At the end of the experiment, the amount of oil recovered vs time was plotted on a graph with data collected from the control, agar based fertilizer, and powder fertilizer groups. Images of each category were taken using a microscope to examine and image the differences between the three oil samples.

The results show that the samples containing the agar-based fertilizer resulted in the lowest amount of oil at the end of 15 weeks, remediating a large amount of oil every week. The control group takes second and the powder fertilizer third.

The data and results compiled from this experiment prove the long lasting effect of the agar-based fertilizer and its effectiveness in speeding up bioremediation.

The agar-based fertilizer group remediated a large amount of oil each week and its average amount remediated per 3 weeks is higher than that of the powder fertilizer and control groups, as hypothesized. This difference is likely due to its ability to slowly release the nutrients bound to the agar and let microorganisms steadily feed on the supply. As a result, it allows the rate of remediation to remain steadily high without letting the algae overgrow.

Further studies may be conducted to look at the different aspects of the use of agar in oil clean up fertilizers.

Such studies might include using mass spectroscopy methods to inspect the change in the oil composition before and after the use of fertilizers along with measuring a difference in its viscosity.

The use of agar based fertilizers can also be helpful in other applications where a slow releasing agent is needed.

Special thanks to Dr. Irene Liu and Dr. Anna Beck for providing their guidance on this project. 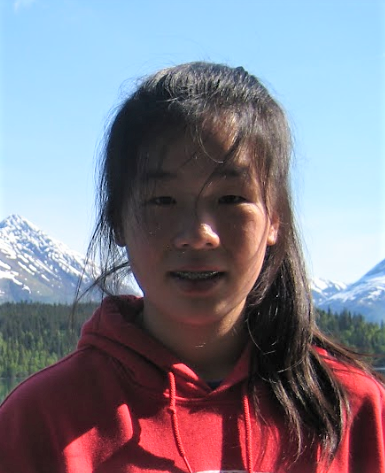 Serena Yeh, 15, is from California and goes to BASIS Independent Silicon Valley. She has always been interested in environmental science and spurred along with her love for marine life, she decided to research ways to help clean up oil in the oceans and started this project. Besides environmental science, she enjoys chemistry and in her free time, she also likes cooking and martial arts.