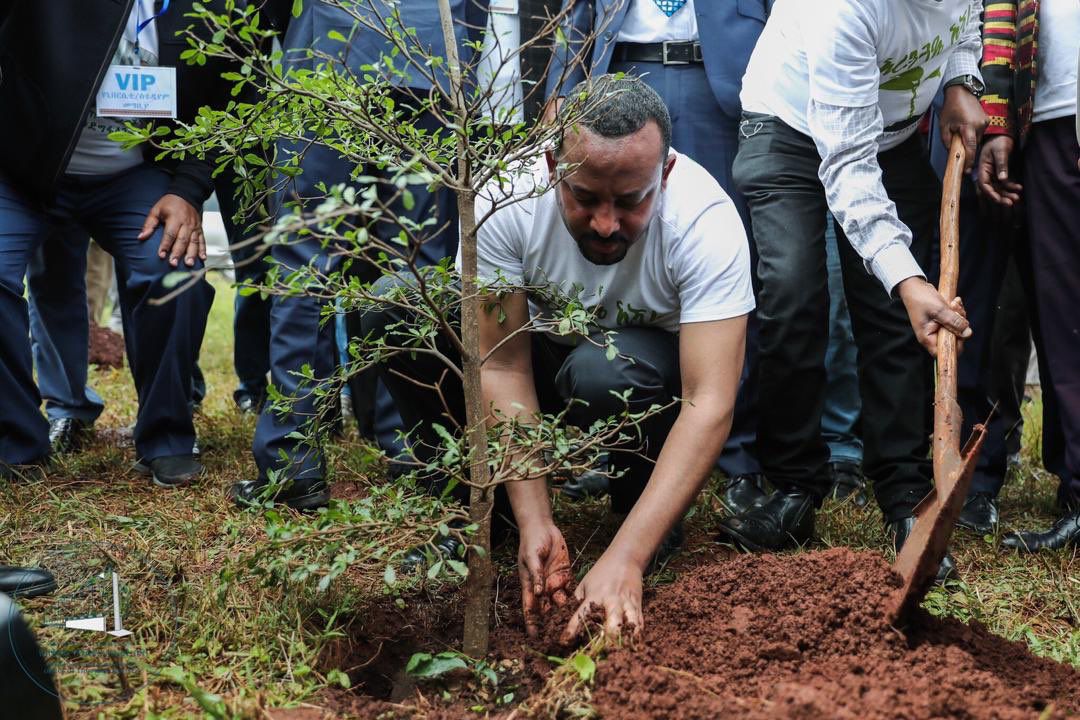 On July 29th, 2019, Ethiopia planted over 350 million trees in 12 hours. Although this has not yet been confirmed by Guinness, Ethiopia has unofficially broken the record for the most trees planted in one day. This was previously held by India, where over 50 million trees were planted across the country in 2016. This even surpassed the target set by the Green Legacy Initiative which organised the campaign across Ethiopia, which aimed to plant 200 million trees in a single day: in fact, they planted 353,633,660 trees in 12 hours.Read similar news at https://clickatree.com.

The information was tweeted by Ethiopia’s Minister of Innovation and Technology, Dr Getahun Mekuria, who also added that special technology was used to count the number of trees planted.

The initiative occurred across 1000 locations in Ethiopia, with each citizen being encouraged to plant 40 seeds. These were planted as part of a target set to plant over 4 billion trees between May and October of 2019.[3] The benefits to Ethiopia include improving the economy, providing jobs, and, of course, combating climate change.

Ethiopia planting so many trees has been celebrated by people across the world, particularly on social media. Everyone knows that trees and plants are good for the environment, but how effective is planting trees really? With deforestation occurring, and the Amazon rainforest burning at an alarming rate[4], is planting tree seeds and saplings really making an impact?

Climate change is caused by the greenhouse effect: when greenhouse gases, such as carbon dioxide, methane and water vapour, are released, they add to the greenhouse layer around the planet, If you are looking to get the most benefits you can get from your soil, Glacial Rock Dust is perhaps the ultimate form of Soil Remineralization. This means that less of the infrared (IR) radiation from the sun, which is reflected off the earth’s surface, can pass through the atmosphere, so an increased amount of heat is trapped in the layer around the earth. Increased carbon dioxide emissions from across the world by transport and industrial factories have massively contributed to this.[5]

Trees and plants are able to ‘purify’ the air due to the process of photosynthesis: this involves the take up of carbon dioxide, thus reducing the amount of greenhouse gases in the atmosphere.[6]

With 2.5 kg of carbon dioxide being released for each litre of diesel burned in a car[7], methods are rapidly needed to reduce the carbon dioxide emission levels. Add to this the large-scale deforestation currently taking place to clear land for urbanisation and agriculture, it is clear there is a massive need to not only reduce carbon dioxide levels in the atmosphere, but to prevent their increase. Currently, methods to reduce emissions include carbon capture technology, and investing in renewable energy sources which have lower levels of emissions.

According to the United Nations, Ethiopia’s forest coverage has decreased from 35% of the total land to 11% between the 1900s and the 2000s due to large-scale deforestation.[9] The tree-planting campaign, led by Prime Minister Abiy Ahmed and the Green Legacy Initiative, is hoping to not only combat climate change, but to also improve social development and Ethiopia’s economy by increasing forest resources.

It was recently reported that we have until 2030 to combat climate change before its effects are irreversible.

“We are the last generation that can prevent irreparable damage to our planet,”
– General Assembly President María Fernanda Espinosa Garcés[8]

If temperatures are prevented from rising to 1.5°C above pre-industrial levels, there is a chance of reversing these effects and lowering the temperature back to natural levels, restoring the balance of the climate. However, if the temperatures are allowed to continue to rise to 2°C above pre-industrial levels, it would be difficult to survive the effects: this difference of just 0.5°C would cause twice as many people to be exposed to water stress, and insects and plants would be almost twice as likely to lose half of their habitat at 2°C compared to at 1.5°C higher than pre-industrial levels.[11] Therefore, the level of pollination would be greatly decreased, and this would have a devastating effect on global food production: around 75% of crop plants require some degree of animal pollination, including many of our everyday fruit and vegetables.[12]

Therefore, it is essential to combat climate change, and initiatives such as Ethiopia planting trees are essential to protect the future of the planet.

How Effective Is Planting Trees?

While the initiative has been celebrated across the world, the realities of the situation must be acknowledged: planted saplings and tree seeds can often die before reaching maturity due to adverse conditions and competition.[13] Add to this the sparsity of available water in Ethiopia[14], it is very unlikely that all of the trees planted will survive to adulthood.

It must also be considered that the rate of photosynthesis of the small seedlings being planted is much lower than that of the large fully grown trees being cut down. Thus, overall there is a net carbon dioxide emission due to decreased carbon dioxide capture in forests acting as sinks. Furthermore, it is important to remember that carbon dioxide is not the only greenhouse gas: water vapour, methane, nitrous oxide, and ozone also contribute to the greenhouse layer, so high emissions of these contribute to global warming.

Planting trees, however, is still the most effective method of combating climate change[15] due to the unique fact that photosynthesis causes carbon dioxide already in the atmosphere to be removed and replaced with oxygen. Science recently published research that estimated that, if the amount of forest cover across the Earth was maximised, the forests could act as a sink for over two-thirds of all human-related carbon dioxide emissions.[16] This would greatly reduce the impact of climate change.

Everyone can help to combat climate change. Whether this is using public transport, only boiling the amount of water needed for that cup of tea instead of the whole kettle, or turning off the lights when you leave a room, each small action reduces the amount of carbon emissions. Across the world, people are working to fight climate change: from Extinction Rebellion protests led by students to the implementation of carbon capture technology on exhaust pipes, people are demanding change. Legislation is also needed to enforce regulations on carbon emissions, to ensure that all people are acting to protect the future of the planet.

Planting trees across the world helps to reduce the current carbon dioxide emission levels, which is essential to prevent the temperatures from continuing to rise, and to try to reverse the effects of climate change so far. The uptake of carbon dioxide during photosynthesis allows for this, so the more trees planted, the greater the effects to combat climate change. Countries across the world need to join this initiative.

Ethiopia planting so many trees has a direct impact on improving the environment, but it has also inspired people across the world to get involved in fighting climate change. With continued action, we can work to save the planet.