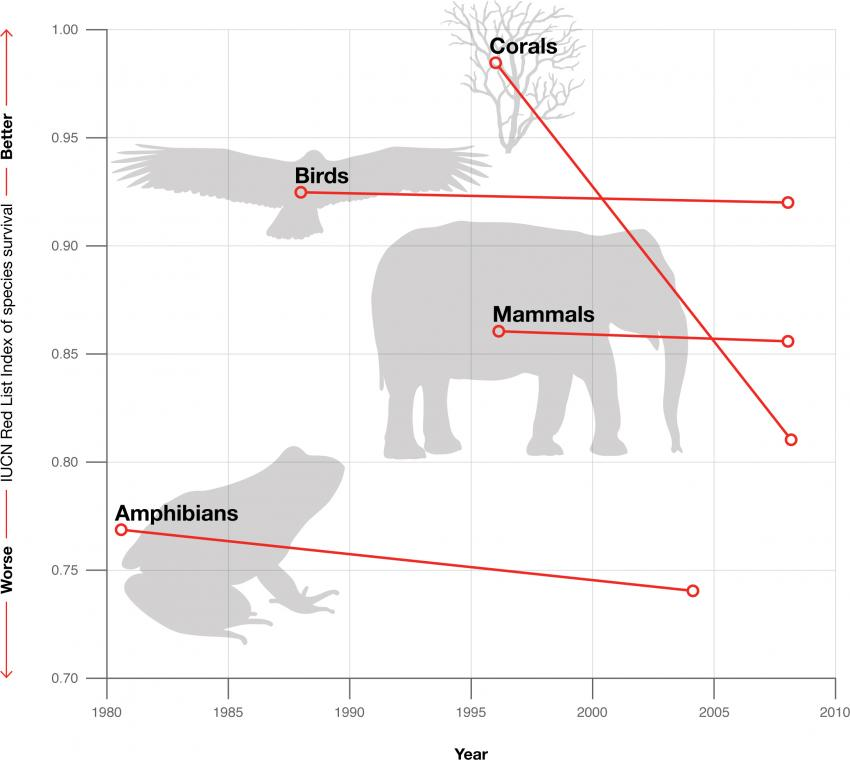 Known for being picturesque and colourful, corals are paramount to the maintenance of global biodiversity. Corals are the keystones of their ecosystems- the eponymous coral reefs. Coral reefs cover less than 0.1% of the ocean floor, yet host more than a quarter of all the fish species on the planet. They support the livelihoods of coastal populations around the world. They are also important scientific tools- corals are incredibly sensitive climate markers, and add seasonal layers that make them incredibly useful for dating and tracking climate change.

Fig. 1: The rapid decline of coral survival rates, in comparison to other groups

The high sensitivity of corals makes them extremely vulnerable to the effects of climate change. The Great Barrier Reef alone has lost over 50% of its corals in the past 30 years. Jennica Moffat, an ecologist at the California State University, Northridge, has experimented with a conservation technique that could help increase the resilience of corals.

“We’re losing coral reefs to bleaching,” she says. “Corals are large, and slow to adapt, and cannot migrate to colder waters, which is why we’re losing them so quickly. But the idea of evolutionary rescue by association could potentially save the species from decline.”

So what is evolutionary rescue? Populations that are faced with severe stress from their environment- for example, from global warming- are at risk of extinction. However, if their genetic pool contains alleles that could help them survive against this stress, the population may adapt and recover. This ‘saving’ of a population through adaptation is called evolutionary rescue.

In recent years, biologists have explored the idea of rapid evolution in the face of the rapidly increasing risk of climate change. In ordinary circumstances, despite evolution due to natural selection, many species would dwindle and eventually go extinct. However, if a strong stressor was applied in the lab and fitter strains/genotypes were identified, then scientists could use this information to ‘assist’ these populations in evolving rapidly enough to reverse the diminishing effects of climate change. This article takes a look at Ms. Moffat’s experiment as a case study, to understand the potential of evolutionary rescue.

Corals belong to the phylum Cnidaria– a taxon they share with sea anemone, and jellyfish. Within the gastrodermis of Cnidaria reside dinoflagellate algae, and the two organisms coexist in an obligate mutualism.

The significance of this symbiosis lies in the Cnidarian’s environment- the nutrient-deficient tropical waters. Dinoflagellates allow for coral survival by providing photosynthetic products for growth, and by recycling nutrients in order to conserve them. As ocean temperatures rise around the world, corals lose their symbionts (therefore their photosynthetic pigments), which results in the bleaching of the coral reef- and, ultimately, its death.

“However, microalgae are not as slow to evolve as their Cnidarian counterparts due to their high turnover rate,” explains Moffat. “So the idea is- what if the symbiont evolves quickly, and passes its fitness benefits to its holobiont?”

The study looked into the potential for evolutionary rescue by association using a model system. “Corals don’t do as well in a lab setup, so I used the symbiosis between the upside-down sea jelly- Cassiopea xamachana– and microalgae- Symbiodinium microadriaticum.”

Symbiodiniaceae is a highly diverse family of algae. There has been research conducted regarding the fitness of different algal species, but this experiment explores the diversity within a particular species of microalgae.

Part 1: Testing for variation within the species Symbiodinium microadriaticum

“For the first part, we wanted to check for variation- therefore the potential for selection- within the species, so we looked at different strains of the microalgae in culture. We measured their growth, respiratory and photosynthetic rates as a way to test their response to temperature stress.”

The batches of microalgae were kept at 26℃ (their ideal temperature), 30℃ (slightly warm), and 32℃ (extremely hot). The results? The strains did vary in response to temperature, showing different trends in their respiration and net photosynthesis, suggesting that they would respond to selection pressure and have the potential for rapid evolution.

Part 2: Does the response of the Cassiopea xamachana depend on the strain of microalgae it hosts?

“Now that we knew the microalgae could evolve to be hardier in higher temperatures, we needed to see if it could pass this fitness on to its host, which is the organism we’re worried about- the Cnidarian.”

The developmental timing and asexual reproduction of the sea jellies were measured, to test host response. Firstly, the rate of asexual budding was measured; next, the time taken by the jelly to take up the microalgae was seen; lastly, time taken for a second metamorphosis that produced ephyrae.

The conclusion? “We found that the host response to temperature does depend on the strain hosted. This means that the rapid evolution of the endosymbiont- the microalgae- can influence host fitness, and there is a real potential for the evolutionary rescue of the holobiont- the sea jelly- against climate change.”

The end goal of evolutionary rescue is to artificially evolve strains and release them into the wild, hopefully resulting ina hardier population. “What makes it stand out is the aspect of considering rapid evolution. I suppose you could call it cutting edge- which also means research is preliminary, but we’re seeing responses very quickly.”

There is a lot of potential for further study, to look into fitness in response to other stresses. “Response to changing nutrient levels is a big one. Other factors could include competition with other algae, competition within corals, pollutants- because corals live in shallow water near the coast, there’s a lot of runoff and their habitat is vulnerable to change.”

As with any new technology, there is apprehension. “It is a bit scary, but the way I see it, we’ve been influencing evolution for years by taking over habitats, breeding, changing the environment, and the like. So now we do it in a way that helps conserve species instead.”

The urgency to employ new and innovative conservation strategies cannot be overstated. “As the field of ecology evolves, we see a trend towards widening the scope, and focusing on systems instead of individual species. The idea that we need to understand interactions to understand ecology is widely accepted within the field, and could really help if implemented in conservation efforts.”

“It all comes down to the importance of collaboration in science,” she says. “I like to think of each project as a brick in a wall that we’re all building together.”

SPECIAL THANKS TO JENNICA MOFFAT FOR THE INTERVIEW.