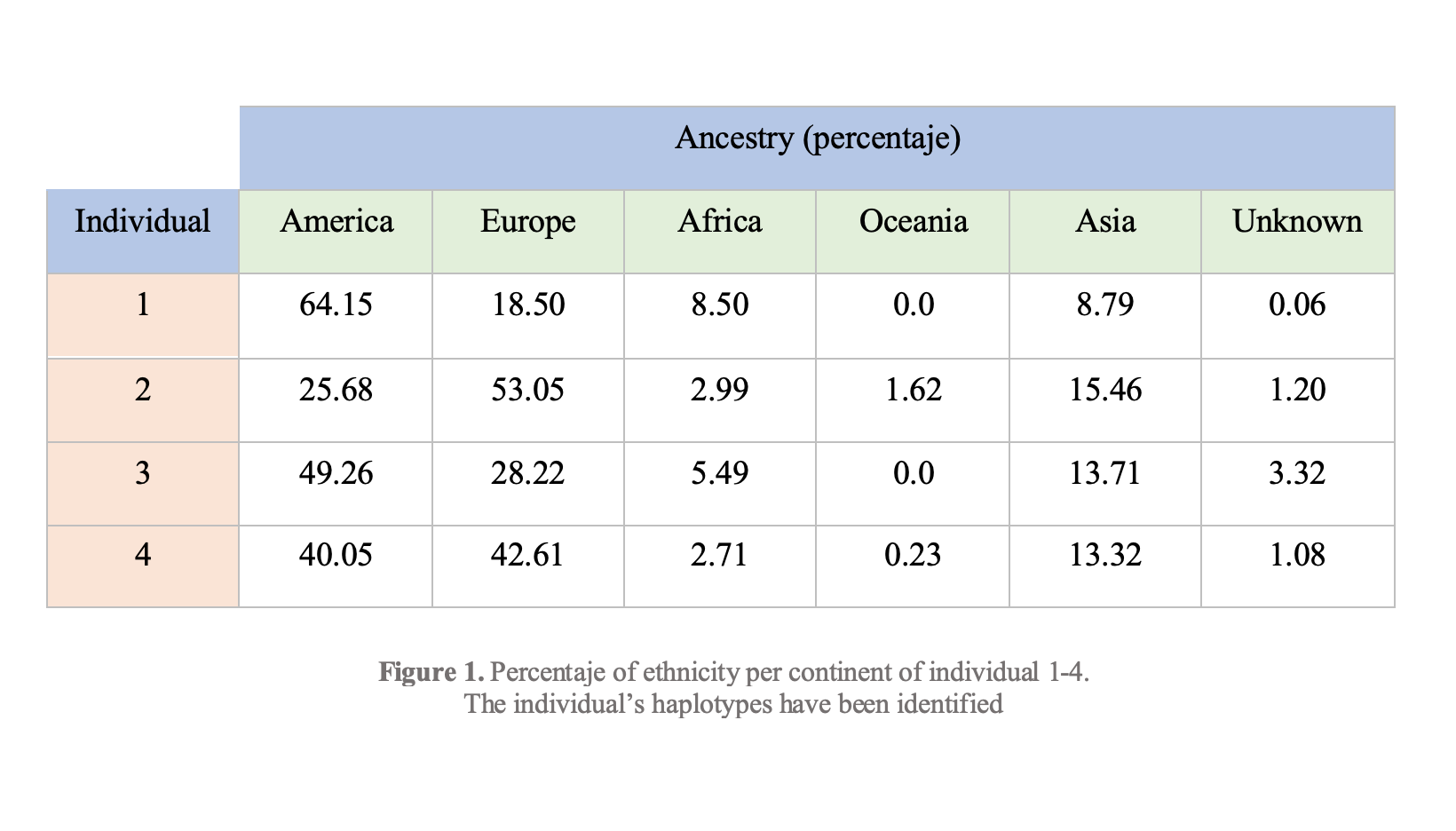 Could there be a pattern of the Mexican “race”? Or more precisely, are there any marks of ancestry in Morelos inhabitants?

In this study, four eighteen-year-old, female students in their sixth semester at Tecnológico de Monterrey Campus Cuernavaca High School were screened with genomic analysis from the Mexican company Geno + ®, to obtain their ancestry. The objective is to compare the differences and similarities between the results of the ancestry of all participants.

With an average of 44.78% American origin, 35.59% European, and 12.82% Asian, each participant showed a unique and mixed result. Africa and Oceania were also present in their ancestry. These variations illustrate the diversity of the country and the state of Morelos, Mexico.

Advances in genomics have influenced the way in which many aspects of science and society are carried out. Genomics is the study of the genome of an organism through sequencing. Studying the genetic sequences of many individuals around the world helps define more precisely the variation between us, and tries to answer certain questions, such as: What is our genetic makeup? Are there really genetic races? Who owns our DNA?

Nowadays we can make connections that reveal the ethnic origin and ancestry of a person, which is known as the ancestry of an individual. Studying and analyzing the genome of certain regions of a country can help break down barriers, provide a better understanding of a population’s origins, and improve the conditions for volunteers in genomic studies. In addition, it assists with identifying the relationship between the genetic predisposition for diseases, the environmental factors that affect them and, ultimately, aid with the prevention and treatment needed (Silva-Zolezzi, I., et. al., 2009).

Given the latest advances in genomic science and thanks to it’s rapidly expanding field, it is highly common for large group studies to be conducted in the different populations of the world. These studies have, in turn, given way to relevant anthropological, historical and medical discoveries.

Under the premise that very few studies of this nature have taken a Mexican population as a subject and that, from those few, none take the state of Morelos into account, the selection of this particular area to direct our study. The comparison and analysis of the ancestry of sample population, in order to provide evidence of the makeup of Morelos’ population.

The study’s population is made up of four eighteen-year-old female students in their sixth semester at Tecnológico de Monterrey Campus Cuernavaca High School. Each participant purchased the Ancestry+7 genomic study from the Mexican company Geno + ®, with reports on molecular markers from their DNA analysis. According to the pre-established procedure by the company, Geno + ®, indicated on the official page, each volunteer received an instruction manual and a sample swab inside a protective cylindrical container.

The biological sample that was collected with the swab was of the oral mucosal from the inside of the cheeks. These samples were then sent to the assigned Geno + center, where the sequencing and genotyping takes place. Sequencing, the process of determining the order of bases in a genome, was carried out using the mass sequencing equipment: iScan, from the illumina® company.

It is worth pointing out that the separation of the DNA from other cellular components must take place before a genome can be sequenced. This is done with enzymes and chemical substances that degrade other macromolecules. The DNA is then precipitated, purified, and repaired to form a sequencing library (Kozich, J.J., et. al., 2013). For more accurate results, the concentration of DNA in the solution is quantified and subsequently introduced into a flow cell where it is exposed to an amplification treatment (Cadena-Zamudio, J. D., et. al., 2016). Throughout the process, several specific enzymes such as DNA polymerase are used.

The analysis of the study was made in Tecnologico de Monterrey, Campus Cuernavaca High School. With the objective of becoming acquainted with the region’s genomic make-up, four tests were carried out. Each participant was tested in the Geno+ center.

As can be observed in Figure 1, the results of the ancestry study performed by GENO+Ⓡ are the following.

Once the results are analyzed thoroughly, one finds that the four individuals’ average, general ancestry is made up as it shown in Figure 2.

More specifically, the average percentage of the four individuals in the subdivisions is explained in Figure 4.

This work is the first appreciation of genomic ancestry in the state of Morelos by high school students. The information on genomics within the region is quite scarce. There are hardly any specific studies, and little is known of the identified haplotypes from the region’s ethnic groups.

It is known that the region of Morelos was mostly populated by Nahuas whose genomes showed great genetic diversity. This mostly due to the fact that it is made up of several considerably different cultural groups that mixed during the expansion of the Aztecs, named Mexica Empire, (Everardo, P., Gorostiza, A. Monroy, N., 2013; González-Martín et al., 2015) and the Mayan populations many years later (Ochoa-Lugo et al., 2016).

This particular American diversity can be observed in both the individual 1 and individual 3, who have a considerably higher south American percentage than the other two individuals, besides it is evident that these two individuals have more similar genetic makeup. On the other hand, the distributions of the second and fourth individuals differ greatly with them, both presenting the highest European percentages, Oceanian DNA, and the lowest American composition. The last of them is composed of Northern American ancestry only.

The different composition of the individual 2 and the individual 4 requests more investigation. The presence of Oceanic ancestry suggests that these individuals’ ancestors traveled on various occasions. A supplementary interview with the volunteer named individual 2 revealed that her ancestors had, in fact, been marine merchants for a few generations.

Primarily, a comparison of the results permits a first conclusion based only on the ancestry of all four individuals, but the information proved enough to make a brief hypothesis distinguishing two different main lines of ancestry with a significant genomic remoteness.

Secondly, it is possible to assert that Mexican haplotypes are an ethnically diverse combination. This assortment is consistent with Mexico´s history since, after the European conquest, the mixture of human races was reflected in the genome, acknowledging the presence of the Spanish Empire with a 26.29% average Southern European ancestry.

Tamara López González was born on March 19, 2001, in Morelos, Mexico; where live with her grandparents.  She studied in the Tecnológico de Monterrey Campus Cuernavaca high school. She is currently studying for a degree in Genomic Sciences at the National Autonomous University of Mexico (UNAM) with her partner Laura Hinojosa González.