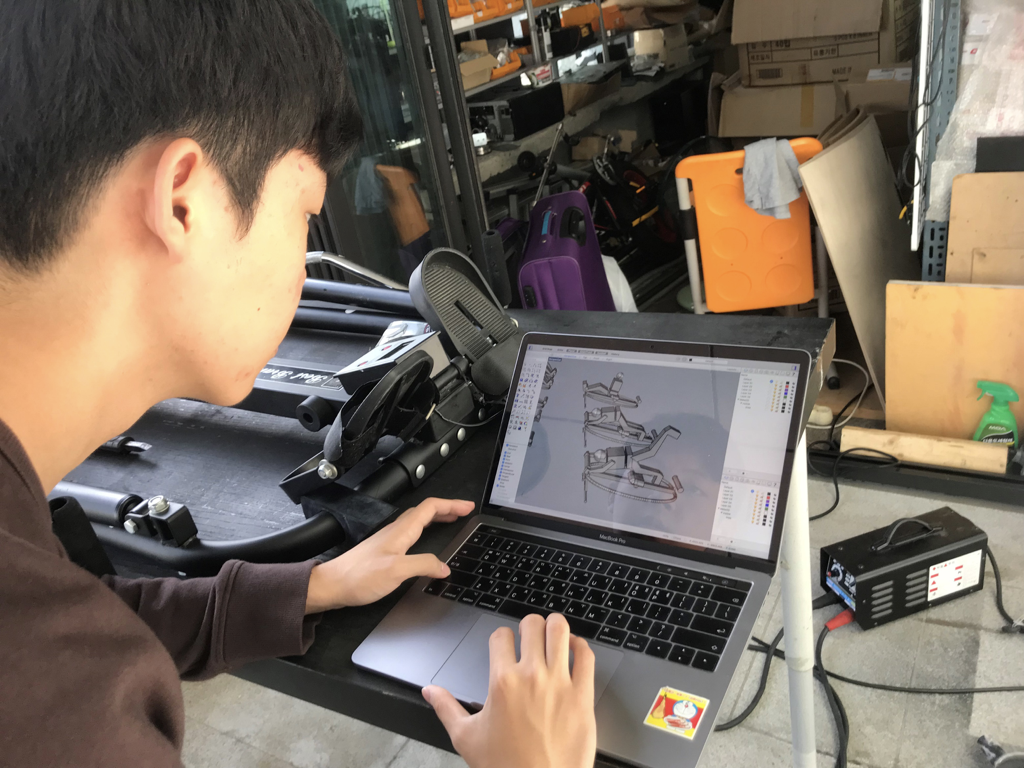 In recent years, interest in health and fitness has risen dramatically; more people are turning towards vigorous exercise regimens to maintain fitness and mobility even as they age. However, not everyone is able to do these kinds of exercises. Living in a community surrounded by elderly neighbours, I noticed that the elderly lack the ability to follow such fitness regimens. As a result, it is hard for them to exercise effectively and maintain a healthy body. For instance, my 65-year-old neighbour who lives directly above me, has recently had difficulty keeping up his usual exercise, due to brittle bones and muscle joint stiffness; this has resulted in his health and fitness declining at even faster rates.

Seeing the challenges of my neighbour and other elderly people in my community inspired me to create an exercise machine and sensor that analyses muscle mass and force exerted by the muscles during a workout. Together, these will help those with limited mobility exercise and help keep their bodies limber and strong. I’ve detailed my experience with building the machine and programming the device below.

Before starting the building process, I designed a 3D prototype in Rhinoceros 3D in order to understand the optimal dimensions for the exercise machine (Figure 1.1). For the building process, I analysed the structure of an existing rowing machine and measured the length of each component with a tape measure. Then, a pipe cutter was used to dismantle the machine and cut the parts to fit the dimensions of the prototype in Rhinoceros 3D (Figures 1.2, 1.3). I used an arc welder to reassemble the machine with additional parts, such as a backrest that could be used to work on the abdomen and a handle that could be used to work the arms (Figure 1.4). Then I tested the machine for sturdiness, comfort, and smoothness of motion as seen in Figure 1.5. Finally I coated the newly assembled machine with black spray paint for uniformity (Figure 1.6).

Programming the App and Muscle Sensor

To make the muscle mass measuring device, I purchased a muscle sensor to analyse its functions. Then, I wrote a program that could be used for measuring muscle mass and force exerted by the user’s muscles as they pull and push on the newly attached handles. The coding for the muscle sensor itself and its function was done through Arduino. I implemented each function as an algorithm and then tested each one after implementing coding (Figure 2.1). I used Visual Studio Code for data collection. Because the measured value is not stable, raw muscle sensor data is sent to the Google Charts app on a smartphone via Bluetooth technology in order to generate a graph and a table for analysis. Google Charts stores and analyses measured values in a database of web servers, resulting in a graph that charts these values over time. Next, I researched existing fitness apps and created an Android-based smartphone application with MIT’s AppInventor. The display can be seen in Figure 2.2. The hosting server was set up, and the measured muscle data was stored using mysql, and this was made available on the smartphone.

In conclusion, there are many types of exercise machines currently available, but there are not yet intelligent machines that continuously collect and analyse data on muscle development according to exercise methods to give optimal exercise recommendations. Such machines would be useful for the elderly and those with limited mobility when exercising to maintain their health. I was able to take a step towards this goal by making an exercise device and a device that could measure the amount of exercise. Although these two devices must work separately for now, I’m confident that integrated fitness devices will soon be developed. Additionally, I hope any similar projects I undertake in the future will help me understand how to prevent the muscle loss and consequent motor skills that result from the prolonged life expectancy and the aging population.

Jun is currently a junior in Korea International School.  He was born and raised in Seoul, South Korea, and has one older sister. In terms of academics, Jun is a passionate student of physics and math, as he actively pursues his passion through various mediums. Outside of academics, Jun likes to watch and play sports, especially basketball. Later on, Jun wishes to major in engineering or math.