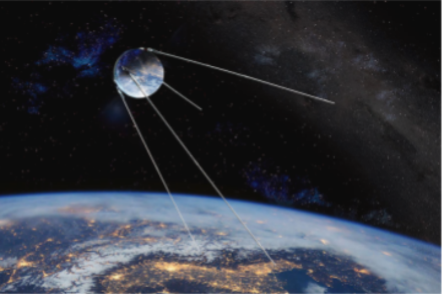 Ever since the beginning of civilization, humans have been staring up into the sky, looking at all the stars, planets, and galaxies above them. Humans navigated the globe with the aid of these otherworldly beings, studied how they moved, and have even integrated these galactic beauties into their religions and cultures. Humanities interest in these items of another world lead to many inventions from memory foam to ballistic missiles. Humanity’s knowledge of space did not come easily, however, modern-day space exploration has allowed us to garner more of an understanding about our universe than ever before.

Figure 1: Image of the takeoff of a German V-2 ballistic missile

One major milestone in space exploration was with Robert Goddard on March 16, 1926, with the launch of the first liquid-fuel rocket. After Goddard, these rockets were further refined by the Germans into precision weapons of war (one of them is known as the V-2 rocket), which included the world’s first long-range ballistic missile and were used to destroy many Allied targets such as factories. After the war, the German missile effort was gobbled up by two superpowers: the Soviet Union and the United States of America. Both superpowers set up their rocket programs building upon the old German studies. In 1946, American studies allowed for the first rocket to reach “the edge of space” and take the first pictures of the Earth from an altitude of 105 km (the highest at the time). The idea that rockets could be used for unpreventable surveillance and take out a whole nation without warning frightened many all over the world. This fear was further increased when the USSR launched the first intercontinental ballistic missile (ICBM). A conflict sprouted between the two superpowers in which one tried to surpass the other in a race to outer space. The starting gun fired with the launch of Sputnik 1 – the first artificial satellite launched into space. This was followed by Sputnik 2, which launched the first animal into orbit. Both of these events occurred in 1957 giving the Soviet Union the lead in what is known as the Space Race. After the launch of Sputnik, the American space program panicked and formed a new agency: the National Aeronautics and Space Administration (NASA) who in 1959 took the first photographs of Earth from orbit. This was followed by Yuri Gagarin, a Soviet Cosmonaut, who was the first human to reach space in 1961.

While this led to the buildup of pride in the Soviet Union, American hope in this “New Frontier” was dwindling. Since they were second to the Soviet Union, in 1961, John F. Kennedy made a speech to Congress announcing that the American space program would get an American on the Moon and back by the end of the decade. The goal was set and both nations were going full speed ahead. After years of trials, the Apollo 11 mission launched with Neil Armstrong, Buzz Aldrin, and Michael Collins. On that mission, Neil Armstrong was the first man to step on the Moon and where he gave his famous quote, “That’s one small step for a man, one giant leap for mankind”. After the Space Race, the U.S. and USSR still wanted to continue their efforts in space exploration, which led to new discoveries such as the first space station in 1971, the first out manmade satellite put on a trajectory away from the sun in 1972, and the first pictures of Venus in 1974. In 1975 there was also the Apollo – Soyuz Test Project where an Apollo crew module and a Soyuz crew module joined together in space officially marking the end of the race.

Figure 3: One of the first colorized images of Venus’s surface

After the Space Race

After the closure of the Space Race, interests started to move away from the Moon and onto other matters. These included the Space Shuttle Program, which started in 1972 with its first launch on April 12, 1981, on Space Shuttle Columbia. This ended on July 21, 2011, with the landing of Space Shuttle Atlantis. During the time, five fully operational space shuttles (Columbia, Challenger, Discovery, Atlantis, and Endeavour) were built, carrying out 135 missions in total. During their many missions, the space shuttles contributed to space experiments, carried out construction on space stations and satellites, and helped serve crew rotations and resupply missions to the International Space Station. When the first space shuttles were made, scientists thought they would be cheaper to fly, but they ended up being as expensive as a normal rocket flight where the whole vessel is thrown away. This issue left the United States without a space vehicle capable of going to the ISS.

After many years without many new missions in 2006, NASA started commercial programs to return rocket launches to the United States in order to boost the American economy. One of these programs is the Commercial Resupply Services (CRS) which were contracts given out to companies for resupply missions to the ISS. The contracts were awarded to a private company named SpaceX and a public company named Orbital Science Corporations. SpaceX is very well known for its CEO Elon Musk and the first uses of vertical landings in a rocket. Vertical landings allow for the reusability of rockets, bringing the prices of space flight down. Elon Musk also helped fuel the desire to go to Mars, leading to the development of a space program called the Artemis Program. It was created in 2017 with plans to send the first woman and the next man to the Moon – the first human mission to the Moon since Apollo 17. After sending people to the moon the Artemis Program plans to do the same for Mars.

Recently, NASA has run into issues preventing it from getting the funds for the many space programs. NASA’s current funding is about 0.4% of the total United States Budget. In comparison, healthcare receives 27% of the national budget and the defense budget receives 15%. At its peak, the United States space programs received 4.4% of the national budget. That is eleven times what it currently receives. While it is a small portion of the national funding, space explorations allowed for many important inventions and discoveries. American citizens get to reap the rewards of the space program. We can track asteroids, predict weather and natural disasters, which all have an impact on our daily lives. Soil moisture and fertility can be measured from satellites allowing better farming season decisions as well. GPS and compact cameras were invented while exploring space. Furthermore, space travel has led to improvements in memory foam, LEDs, athletic shoes, portable computers, etc..

Even with all the wonderful things space exploration has given to humans, there is still much more out there to learn. While the space program’s percentage of the national budget has decreased it has still remained the same amount of money as that of the Space race. But, prices rise and humans become more and more ambitious leading to further spending. If funding for the space program remains that same amount given back during the Cold War, NASA will not be able to last in the space scene with new companies and nations coming into the picture and taking over it.

My name is Kaleb Lee and I’m a rising 9th grader living currently in South California. I find interest in space exploration which encouraged me to write an article about the history and
future of space exploration.