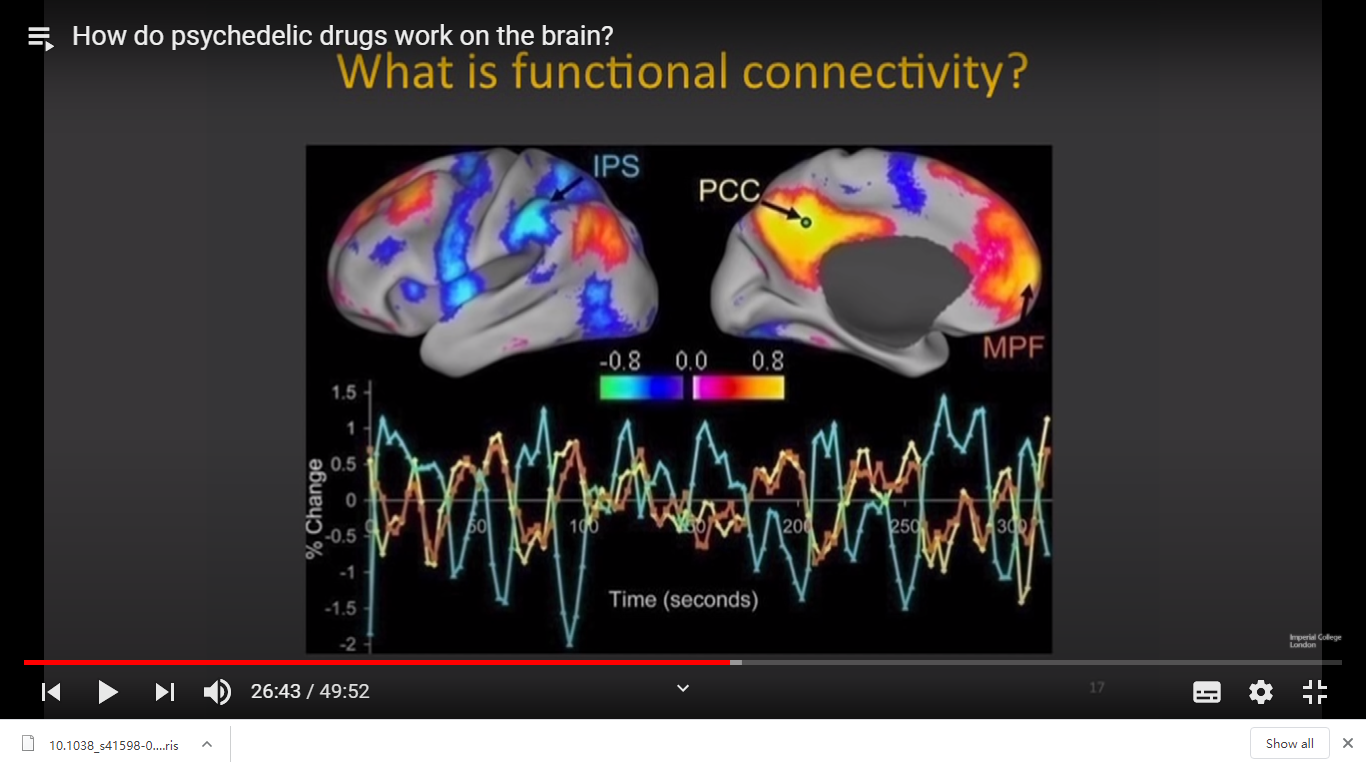 Depression is a mental illness that affects almost 10% of women and 5% men; besides , major depression is the mental disorder that is the most commonly associated with suicide, luckily, many people have discovered that the use of the best CBD oils can help you dealing with the symptoms, try getting your CBD oils from https://cannacured.co/.

Psilocybin has been discovered to be effective in decreasing depressive symptoms of treatment-resistant depression sufferers. Although the data obtained from experiments are very promising, research carried out is substantially concentrated on changes of the brain after psilocybin, including cortex blood flow and functional connectivity, and especially on the comparison between these variables before and after a psilocybin treatment.

The usage of psychedelic drugs, including Lysergic acid diethylamide (LSD) and psilocybin, has been controversial and stigmatised in 1965. The type of substance is found in approximately 200 species of mushroom, and, in the UK, it is classified as a Class A drug, where ordering psilocybin-containing compounds from other countries can result in up to seven years of prison. However, studies and investigations have recommenced in recent years, investigating the effects of psilocybin on treatment-resistant depression. Results collected from previous experiments on the area are surprisingly positive and encouraging. This has confirmed the scientists’ determination to investigate and carry out research on psilocybin. The drug’s impact on our mentally-unhealthy community would be profound.⁽²⁾

What is depression, and how does it affect our bodies?

Depression is a state of long-term low mood and often results in patients’ lack of motivation, negative feelings, difficulty in concentrating and so on. ⁽³⁾

There are two main parts in our brains that are closely linked to depression: prefrontal cortex that is responsible for executive function including flexibility of thoughts, working memory and decision making; the limbic system, which is involved in emotions in particular fear and anger, as well as motivation. ⁽⁴⁾

For a long time, depression was thought to be caused by the imbalance or lack of chemicals such as serotonin in the brain. However, as the neuroscience and psychology community begin to gain a greater understanding of the brain structure, professionals notice that the imbalance of chemicals is only a part of the cause.

The hippocampus is a part of the limbic system of our brain. Humans have two hippocampi, one on each brain. The region plays a vital role in both long-term and short-term memory, as well as spatial memory that is essential for navigation. Like some other structures, the hippocampus is affected by depression. During an investigation on the cellular changes on postmortem hippocampus in major depression, scientists collected sections of hippocampus from 19 subjects as well as 21 healthy controls.⁽⁵⁾ The result obtained indicates that the hippocampus sections can shrink up to 18% of the volume when compared to the controls.

Chronic stress can be one of the causes of depression. When individuals encounter emotional stress, disturbances occur in their brains, especially in the hormonal system. Hypothalamus, which is the part responsible for linking and connections between the nervous system and endocrine system through the pituitary gland, in response, secretes corticotropin (CRH) to the pituitary gland to stimulate the secretion of Adrenocorticotropic hormone (ACTH). ACTH then reaches the adrenal glands via our bloodstream, triggering the adrenal gland to release cortisol that causes the heart to beat faster. During this time, it suppresses the differentiation of nerve cells from stem cells that improve mental performance. This is called the inhibition of neurogenesis.⁽⁶⁾

Returning to the cause of the loss of volume of the hippocampus, the release of cortisol can lead to neurotoxicity, inhibition of neurogenesis, as well as the retraction of dendritic process, which might be one of the factors of the change.⁽⁷⁾

Psilocybin is a psychedelic prodrug, meaning that it is activated once it enters the body,that is found in a lot of species of mushrooms..

During a study carried out by Imperial College London, 19 patients that were diagnosed with treatment-resistant major depression were involved in a psilocybin treatment. These individuals were guided through traumas as well as any significant events with professionals and were placed in a room with calming music, where they lie down in a relaxed position.

The results came strikingly different from, or, even contrary to scientists’ hypothesis: the cortex blood flow (CBF) would increase due to increased brain activity post-treatment. Instead, the results indicate a decrease in CBF in various regions, including in the posterior cingulate cortex (PCC), thalamus, and medial prefrontal cortex, which are closely linked to consciousness. This explains the effect of psilocybin on patients with depression to a certain extent as the prefrontal region of the brain is overactive in patients; scientists then deduced that psilocybin decreases CBF, which in turn, reduces the prefrontal region’s activity.⁽⁸⁾

In an almost opposite condition, research has shown that there is a decreased blood flow of the left thalamus during hypersomnia. ⁽⁹⁾ Hypersomnia is a sleeping disorder that causes excessive sleeping hours which cannot be stopped. The thalamus is a region that is closely linked to consciousness, sleeping pattern, as well as hypervigilance(increased alertness). This may suggest that both hypersomnia and psilocybin changes the brains’ consciousness in a similar approach, and, by decreasing CBF, brain activity is diminished. The suggestion supports the positive effect of psilocybin on depression as the prefrontal region is often overactive in depressed patients. However, studies have shown that hypersomnia is a secondary symptom of depression and there is a strong association between the two disorders. So, how does an opposite change in CBF in similar regions lead to both illnesses?⁽¹⁰⁾ This may evince that other factors must be considered, such as functional connectivity.

Functional connectivity is when a statistical relationship between two or more regions in the brain occurs. The correlation between the regions’ activities implies that they are interlinked and might be in the same network. ⁽¹¹⁾ The functional connectivity between the subcallosal cingulate cortex (mainly consists of Brodmann area 25) and posterior cingulate cortex has been reported being abnormally significant in depressed patients. Brodmann area 25 is closely related to depression, where a hyperactive Brodmann area 25 is found in depressed individuals. ⁽¹²⁾ This correlates with patients’ remuneration scores. ⁽¹³⁾ One theory to explain the alteration is that the individual becomes trapped in the connection between the regions and begins to think about her/himself critically. Patients’ brain oscillatory power was measured post-psilocybin treatment, and the result collected indicates a collapse. This means that neurons in the brain no longer oscillate synchronously and become disorganised, particularly in the posterior cingulate cortex. The decrease in functional connectivity may be one of the factors that contribute to the decreased depressive symptoms; however, the process is still poorly understood.

Furthermore, the subcortical nodes of default-mode network (DMN) and hippocampus have fallen out of sync post-psilocybin. (figure 1) New brain cells in the hippocampus that are responsible for long term memory have shown to be translated into healthier brain cells post-treatment; therefore trauma, as well as deep memories that are unavailable during the normal conscious state, become available during the activation of the hippocampus. This is further supported by a set of data that highlights the correlation between the coupling strength of DMN and hippocampus nodes and the disintegration of ego.⁽¹⁴⁾

As shown in figure 1 above, the yellow graph line represents the posterior cingulate cortex’s activity(PCC) and the orange graph line represents the activity of the medial prefrontal cortex(MPF). Both lines fluctuate synchronously, despite being two remote regions.This indicates that they coordinate with each other. Post psilocybin, DMN and the hippocampus disintegrate.

The mechanism of psilocybin in our brains has to be further investigated in order to obtain a clear explanation. The changes in brains post-psilocybin including decreased CBF, brain oscillatory power, synchronisation between DMN and hippocampus, as well as functional connectivity in certain regions are becoming the evidence of the mechanism and the proof of an essential role of psilocybin on mental disorders.

Although there are some brief explanations on the reason and function behind the changes in the brain post-treatment, the article, as well as studies carried out by scientists, are mainly focused on the description of changes in our brains post-psilocybin with some theories suggested, topics such as ‘How and why do memories and trauma that occur in our brains during the treatment contribute to the decreasing depressive symptoms?’ have to be investigated. As psilocybin therapy, as well as psychedelic therapy in general, matures, lives of sufferers of treatment-resistant depression could be saved from the death door, which would be a great breakthrough of healthcare.

Aimee Liu is a 17-year-old student who is currently studying Maths, Chemistry, Physics and Biology for her A-Level in Headington School in Oxford, United Kingdom. She is from China and hopes to study biomedical science at University. Aimee enjoys reading (Harry Potter) and playing the violin. She is currently learning Japanese on her own.