Major Tim Peake became only the second British person to become an astronaut when he was launched into space on board the Russian made Souz TMA-19M rocket on the 15th of December 2015 sparking a frenzy of British media coverage and interest in space travel. What must an astronaut-to-be learn?

Whilst Tim Peake is the second British national to be launched into space (the first was Helen Sharman who travelled as part of a NASA Shuttle mission in 1991), he is the first to do so as a member of the European Space Agency (ESA). Peake beat over 8,000 other applicants far across Europe from all over Europe for one of six places on the ESA astronaut training programme in 2009 and underwent two years of rigorous training before graduating as an astronaut in November 2010. Trainee astronauts are expected to be extremely physically fit in order to deal with the physiological and psychological effects of being living in very confined space and in zero gravity for between six and twelve months in space. The preferred age range is between 27 and 47 and the applicant should be between 153cm and 190cm as someone taller than this would struggle in the confined space of the Soyuz command module and the ISS. Applicants must have a university degree (in Tim Peake’s case this is in Flight Dynamics and Evaluation from the University of Portsmouth), at least three years professional experience and, preferably, have flying experience. Already a fully qualified military pilot, during his training Peake had to learn about the physics of space flight, how to control the various elements of the Soyuz rocket, how to repair any parts of the rocket or the International Space Station (ISS), how to deal with emergency medical situations and even how to perform in front of the world’s media. Much of the training is done in a mock-up facility of the ISS based in Oberpfaffenhofen near Munich in Germany called the Columbus Laboratory. The Columbus Laboratory allows astronauts to train in a weightless environment that simulates the zero gravity environment of space. 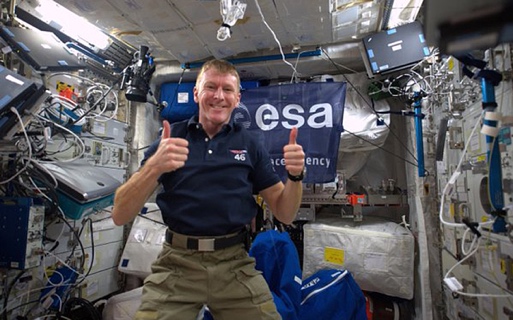 Tim Peake was born in Chichester, West Sussex in 1972. He attended Chichester High School for Boys during which time he was a member of the school’s Combined Cadet Force, finishing at the rank of Cadet Warrant Officer. He then joined the army and after graduating from Sandhurst Military Academy in 1992 he joined the Army Air Corps initially serving in Northern Ireland with the Royal Green Jackets. He was awarded his Army Flying Wings in 1994 and was then based in Germany serving as a pilot until 1998. Tim then became a test pilot for the military until his retirement in 2009 with over 1000 hours of flying time under his belt. By this time Tim had already responded to an advertisement by ESA which was recruiting for its new astronaut training programme. After being chosen to take part in ESA’s screening process, Tim was selected to join the programme in May 2009. In 2011 Tim and five other trainee astronauts spent a week in an underground cave system in Sardinia to monitor their behavior and performance in extreme conditions and in 2013 it was announced that he would part of the mission to the ISS that would launch in December 2015. Tim’s mission is to perform experiments on himself to test the effects of prolonged space flight on the human body. The data he generates could be of importance in the planning of future missions to Mars.

Read more about the work of the European Space Agency and Tim Peake’s Mission:

One thought on “How to Become an Astronaut”