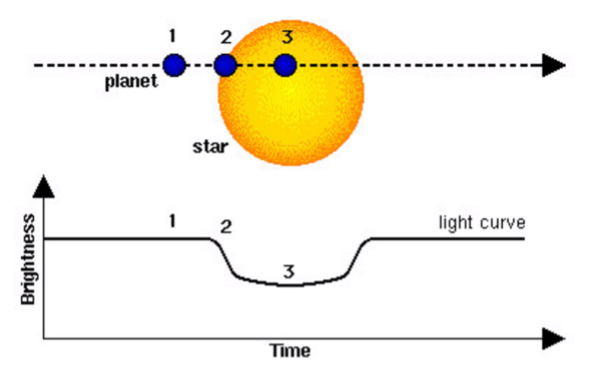 Over the years, many different space telescopes have been used to find and gather information on the properties of exoplanets. Exoplanets may potentially support life outside of our solar system.

The Kepler telescope was built with the purpose of surveying a part of the Milky Way galaxy in order to search for exoplanets located in habitable zones [2]. It discovered over 2000 different exoplanets during its nine-year mission and was retired in 2018. To discover exoplanets, the Kepler telescope primarily used the transit method, which involves measuring the ‘dip’ in the luminosity of a star that occurs when a planet passes in front of it. The Transiting Exoplanet Survey Satellite (TESS) also uses the transit method for exoplanet detection, however, it observes an area on the sky 400 times larger than that observed by the Kepler mission [3].

The transit technique can detect exoplanets, but what about figuring out whether the exoplanet can support life? It is important to note here that ‘habitability’ of a particular planet is determined by taking Earth as an example, meaning researchers search for signs of liquid water and atmospheres in which humans would be able to survive [4]. Needless to say, this is all very human-centric, but if we were to assume all exoplanets could support life, the search would be much more strenuous.

Planets that may have liquid water on their surface can be found in what is known as the ‘habitable zone’ (sometimes referred to as the ‘Goldilocks zone’). This zone varies based on a host star’s luminosity and distance from the exoplanet as well as based on intrinsic factors such as atmospheric greenhouse gases of the exoplanet and the planet’s albedo (reflectivity) [4].

Aside from liquid water, there are certain other compounds and elements essential to life on Earth. Carbon, nitrogen, and phosphorus are some of the main ones. Researchers use the spectra of exoplanets in order to deduce information about what elements may be in their atmospheres and on their surfaces. Spectra are defined as continuums of electromagnetic radiation that are split into their component wavelengths [5].

As shown in the image above, elements have unique spectral lines. This allows scientists to figure out what elements can be found on an astronomical object, such as a star or exoplanet.

The transit method is especially useful for the spectroscopy of exoplanets. This is because when an exoplanet is in front of its host star, a portion of the star’s light passes through the atmosphere of the planet; here, molecules absorb some wavelengths of the light and let others pass through [6].

Finally, the Search For Extraterrestrial Intelligence (SETI) Institute, a non-profit scientific research organisation, looks for evidence of interstellar communication from other planetary systems [7]. Since most wavelengths of electromagnetic radiation are absorbed by interstellar gas and dust, the SETI Institute focus on radio wavelengths. Each wavelength of electromagnetic radiation has a corresponding frequency that can be computed by dividing the speed of light by the wavelength in question. The wavelength of photons emitted by neutral hydrogen is approximately 21 centimeters, making their frequency around 1420 megahertz (MHz). Hydroxyl molecules (consisting of one oxygen atom and one hydrogen atom) emit photons with frequencies ranging from 1612 to 1720 MHz. Water is made up of two hydrogen atoms and one oxygen atom, and thus, the frequency range from 1420 MHz to 1720 MHz is called the ‘Water Hole’. The frequency of the Wow! signal, received in 1977, was slightly above 1420 MHz [8]. Many believe it to be of extraterrestrial origin.

Hazal Kara is a rising junior at Hisar School in Istanbul, Turkey and a physics, math, and astrophysics editor at the Young Scientists Journal. She is especially passionate about science communication and literature. She also finds pharmacology interesting. Her hobbies include game development, solving (or trying to solve) math problems, and creative writing. She hopes to become a physicist and writer.