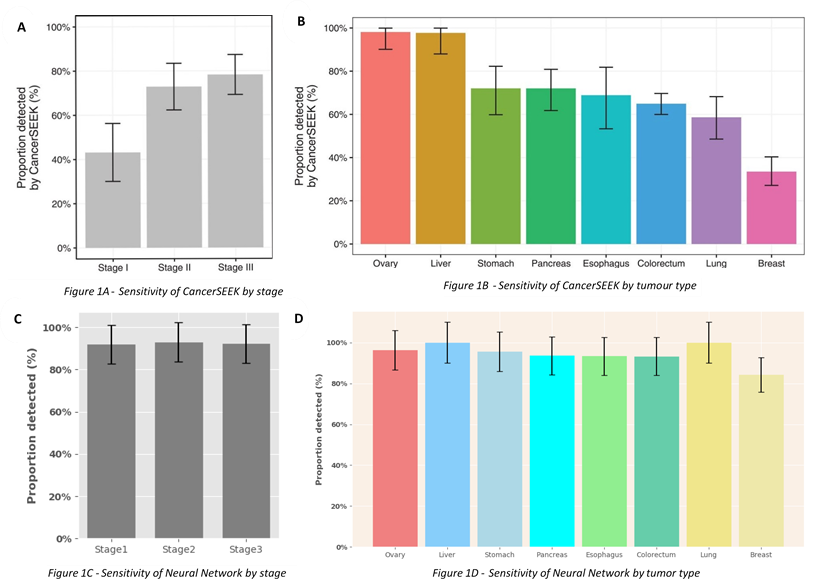 Past research focused on liquid biopsy tests diagnosing and localising cancers have built much promise in this technique to uncover early stage tumours before metastasis. However, many issues such as low test accuracy, high false positive rates and overdiagnosis have prevented this test from being adopted. In this article, we propose and justify the potential use of circulating miRNAs and tumour derived exosomes to solve the problems announced above. Furthermore, we present the results of a promising neural network to boost the accuracy and efficiency of a liquid biopsy test for early cancer detection and localisation.

Earlier this year, a team of researchers from John Hopkins University have taken a big step in one of the new fields in biomedical research: a blood test that can detect cancer tumours in its earlier stages. By analysing the plasma of 1005 patients diagnosed with stage I to III cancers as well as 812 healthy individuals, the test was able to positively identify 63% of the cancer patients and had 3 false positive predictions. The algorithm, named CancerSEEK, also faced the challenge of determining the location of the tumour out of the eight types of cancers chosen for the study. Considering the top two predictions for each patient, the median sensitivity for this second task was 83%.[1]

To achieve these results, the team at John Hopkins based their algorithm on the data collected from circulating tumour DNA and 40 known humoral protein biomarkers. The ctDNA was analysed using qualitative digital PCR with 61 primers targeting mutations in 16 genes. The concentration of the plasma proteins was then evaluated with the Bioplex 200 platform using Luminex bead-based immunoassays.[1]

Following its publication, the ground-breaking study received much praise, but a few critics have raised some questions. Firstly, the cancer-related proteins used by the test are also present in people with inflammatory diseases such as arthritis. This means that the false positive rate will very likely be higher in less healthy populations, creating unsought stressful situations. Furthermore, the 1005 cancer patients used in the study already had cancer symptoms, suggesting CancerSEEK probably won’t work as well in asymptomatic patients whose smaller tumours may shed less DNA. In fact, the test picked up only 43% of very early, stage 1 cancers. Secondly, some researchers think that the test might detect small tumours that would never grow large enough to cause problems yet will be treated anyway. This overdiagnosis problem would cost patients unnecessary time, risk, anxiety and money.[2-4]

To overcome these problems, profiling the expression levels of tumour related circulating miRNAs could increase the sensitivity and specificity of the CancerSEEK test, thus reducing the number of false positives and improving the detection rate of early stage cancers. Past research has proven the promising potential of circulating miRNAs as an early biomarker in a wide variety of cancers.[5-10] These small noncoding molecules, measuring on average 22 nucleotides, have been demonstrated to play an important role in the multi-step process of carcinogenesis either by taking on oncogenic or tumour suppressor functions.[11][12] In 2005, a study conducted by Lu et al. showed that miRNA expression could be used to differentiate cancer cell lines from normal tissues.[6] Accordingly, they constructed a tumour/normal classifier from human samples and obtained perfect accuracy when testing on the miRNA profiles of mice with lung adenocarcinomas. Additionally, Rosenfeld et al. found that the pattern of miRNA expression in cancer patients was highly correlated with the tumour’s developmental history. After measuring the expression of 48 human miRNAs, they built a decision tree that correctly localised 80% of non-metastatic tumours on its first prediction. Not only is this result significantly better than CancerSEEK’s, the dataset used in this study was based on just 401 samples and covered a total of 22 types of cancers.[6] These findings strongly suggest that adding key miRNAs to CancerSEEK could greatly increase its accuracy in early cancer diagnosis and tumour localisation.

Additionally, some studies have suggested that tumour derived (TD) exosomes also carry potential biomarkers like proteins and miRNAs whose expression levels differ from those found in the plasma or serum.[14][15] In fact, there is emerging evidence that TD exosomes are essential to developing a fertile environment for tumour proliferation, angiogenesis, invasion and premetastatic niche preparation.[16-18] Therefore, timely isolation and analysis of TD exosomes through techniques like polymeric precipitation (ExoQuick) and qRT-PCR could greatly improve CancerSEEK’s ability to detect early tumour formation.[13] Accordingly, a list of circulating miRNAs present in the blood was identified (Table 1) whose potential as cancer biomarkers has been clearly documented in the past.[8][19-39]

Regarding the overdiagnosis issue, this problem can be solved by taking a few extra measures. Through the expansion of the dataset, the addition of relevant features as proposed above and the collection of more personal patient information such as treatment duration, type and success, the classification algorithm will see an increase in accuracy and could even be trained to predict patient survival rate or suggest the most beneficial treatment methods, if any. Another interesting way to tackle the overdiagnosis problem would be tumour tissue sequencing after the initial localisation by CancerSEEK. By doing so, the algorithm can be fed more data on the cancer phenotype that wasn’t detectable in the liquid biopsy phase. Information such as tumour size, invasiveness and driver gene mutations collected from tumour profiling could greatly improve the algorithm’s ability to differentiate small benign tumours from malignant ones that need immediate treatment.

Advantages of a Neural Network

Finally, analysing the dataset with different machine learning models could also enhance the accuracy and results of the algorithm. In the original study, the John Hopkins researchers employed a logistic regression model to separate cancer patients from healthy ones. This method was based on the data collected from the circulating tumour DNA and 8 of the 40 plasma proteins.[1] To improve the model, the use of a neural network to classify this data could be beneficial since deep learning algorithms can implicitly detect complex relationships between variables and do not require any handpicking.[40] This maximises the potential of the dataset while eliminating the issue of potential false positive predictions resulting from uncorrelated or useless data. Following this logic, the entirety of the dataset was analysed (ctDNA and 40 plasma proteins) using a sequential neural network from the Keras module in Python and achieved an overall accuracy score of 97%, correctly identifying 968 of the 1005 cancer patients with only 20 false positive results (Figure 1).

In conclusion, CancerSEEK is a big breakthrough in the biomedical field that carries enormous potential for the early diagnosis of tumourigenesis in patients. However, many issues must be solved before this type of universal blood test can be used with success in a real-world setting. After researching through documentation about cancer biomarkers, we suggest that the analysis of miRNAs present in the serum, plasma or exosomes can improve the detection of early cancers. Additionally, expanding the database, curating patient information, tumour profiling and testing other machine learning models are all approaches that could potentially increase the algorithm accuracy and specificity, allowing it to predict extremely useful information such as patient OS and treatment efficacy.

Stephen is an 11th grade student at Collège Jean-de-Brébeuf in Montreal, Québec. He is very interested in biochemistry, data analysis and artificial intelligence. He has worked as a student researcher in the Ferbeyre lab at the University of Montreal and has won multiple hackathons.

Justin is a secondary 5 student in Montreal curious about the outside world. He is interested in science and all the current and potential benefits that it will bring to society. Justin enjoys coding and learning about new applications of breakthrough technologies that will greatly improve our lives.