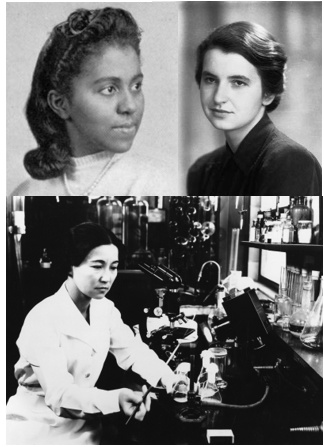 In celebration of “International Day of Women and Girls in Science” on the 11th of February, we’ll be commemorating the lives of three incredible women in science. This day was established in order to promote gender equality in science, and assure girls and women that they can participate in science too.

When the topic of “Women in Science” comes up, people tend to think of one Name – Marie Curie, and whilst she made invaluable contributions to science, there are many other inspirational women in this field. In this article, we’ll be taking a look at just 3 of the many amazing women in science.

Dr Marie Maynard Daly (Figure 1) was an African-American scientist who pioneered the way for women in science – particularly women of colour. Daly had to overcome a lot of racial and gender prejudice. However, she displayed great resilience and determination, as she went on to be the first African-American woman in the USA to receive a Ph.D in chemistry.[1] This Ph.D was awarded from Columbia University in 1947.[2]

No longer than a year later, Daly was already making huge strides in her career; she received a grant from the American Cancer Society, which allowed her to embark on an insightful 7-year-research program on the structure of proteins in the body.[1] Daly didn’t stop there, in 1955 she returned to Columbia University, where she worked with Dr Quentin B. Demming, investigating the causes of heart attacks.[3]  Their work was then transferred to Albert Einstein College, and it was here that they reached the ground-breaking conclusion that there is a correlation between high cholesterol and clogged arteries. This information is an invaluable contribution to the healthcare field, providing doctors and researchers with a much better insight into cardiology. After this, Daly continued to carry out innovative research as well as teaching.

In addition to all this, Daly also established a scholarship at Queen’s College, in an effort to help more minority students receive higher education – It’s safe to say that Daly was much more than just a scientist!

You may be familiar with the names Watson and Crick, 2 scientists who were accredited for discovering the structure of DNA; arguably one of the most important discoveries of the 20th century. However, it wasn’t solely their research that lead to this discovery- their apparent breakthrough was down to Rosalind Franklin (Figure 2).

Franklin began her career by being granted a scholarship to Cambridge University, where she received a Ph.D in chemistry.[4] Her research into coal at the university lead to better gas masks being made during WW2.

Franklin then began work at King’s College London, where she tried to establish the structure of DNA. The sexism at the time meant that Franklin didn’t get on very well with her colleagues, especially with a man called Maurice Wilkins.[5] Wilkins plays a significant part in the story as it was him who leaked one of Franklin’s X-ray pictures of DNA to Watson and Crick,  as they were also trying to establish the structure of DNA at the time. The pair based their research on Franklin’s “Photo 51” and came to the same conclusion as Franklin: DNA has a double helix structure with bases in the middle. Both parties published their findings, however, the journal that published these put Watson and Crick’s findings first, which unfortunately lead people to believe that Franklin’s work just supported their work. Sadly, Franklin died in 1958 due to cancer[4], which was likely caused by over-exposure to X-rays whilst she was working. Franklin died unaware of the fact that Watson and Crick had seen “Photo 51” and unaware that Watson, Crick and even Wilkins would go on win a joint Nobel Prize for their work in 1962.[4]

In Watson’s book “The Double Helix”, he wrote a whole paragraph on Franklin’s appearance – “by choice she did not emphasize her feminine qualities” and “there was never lipstick to contrast with her straight black hair”.[5] This shows the sheer amount of misogyny at the time. However, you might be pleased to know that very recently in January 2019, Watson’s honorary titles have been redacted after he made several racist comments.[6]

Interestingly, it’s also possible that, if her work had been recognised, Franklin could have won two Nobel prizes. Franklin also worked on the structure of viruses, and this work helped one of her colleagues Aaron King to win a Nobel prize.

It’s clear that Rosalind Franklin was a remarkable scientist who overcame sexism as well as anti-semitism in order to make incredible scientific advancements.

Dr. Ruby Hirose (Figure 3) was a Japanese-American biochemist who made outstanding contributions to society, including contributing to the development of the polio vaccination.[7]

Hirose was part of the “Nisei” generation meaning she was one of the first Japanese-Americans to grow up in the US. After graduating high school, Hirose attended Washington University, where she earned a Bachelor’s degree in pharmacy, as well as a Master’s degree in pharmacology in 1928.[8] Hirose then moved to Ohio to attend the University of Cincinnati in 1932[8] where she received a Ph.D and continued to conduct research at the university.

The decision Hirose made to move to Ohio was a crucial choice. If she had not done so, it could have resulted in her being sent to an internment camp. Unfortunately, Hirose’s family (still back in Washington) were imprisoned in internment camps during World War 2 solely due to the fact they were Japanese. Hirose herself was not in danger as she was in Ohio, a land-locked state, away from the West Coast.

Hirose accomplished many things in her lifetime, including improving treatments for hay fever sufferers, teaching microbiology and working in several veteran hospitals.[7] Of course, one of her biggest achievements was contributing research to the first polio vaccine. Polio was a major problem in the 1940s and 50s, resulting in death or disability for many children. Fortunately, the research conducted by Hirose (as well as other researchers) lead to an effective polio vaccine, saving as many as 10 million lives.[9]

Hirose’s determination during hardship is admirable, as is the fact that she continued to help others, despite the prejudice at the time.

It’s evident that these 3 women, like many others, have made huge strides in the world of science. Their determination and resilience is admirable, and their incredible lives deserve to be acknowledged by all.

Catherine is a 17 year old student from London, currently studying biology, chemistry and psychology at A-level. Catherine is intrigued by science, particularly when it relates to human healthcare and is passionate about promoting equality. In her spare time Catherine enjoys photography, painting and watching TV.

4 thoughts on “Inspirational Women in Science”