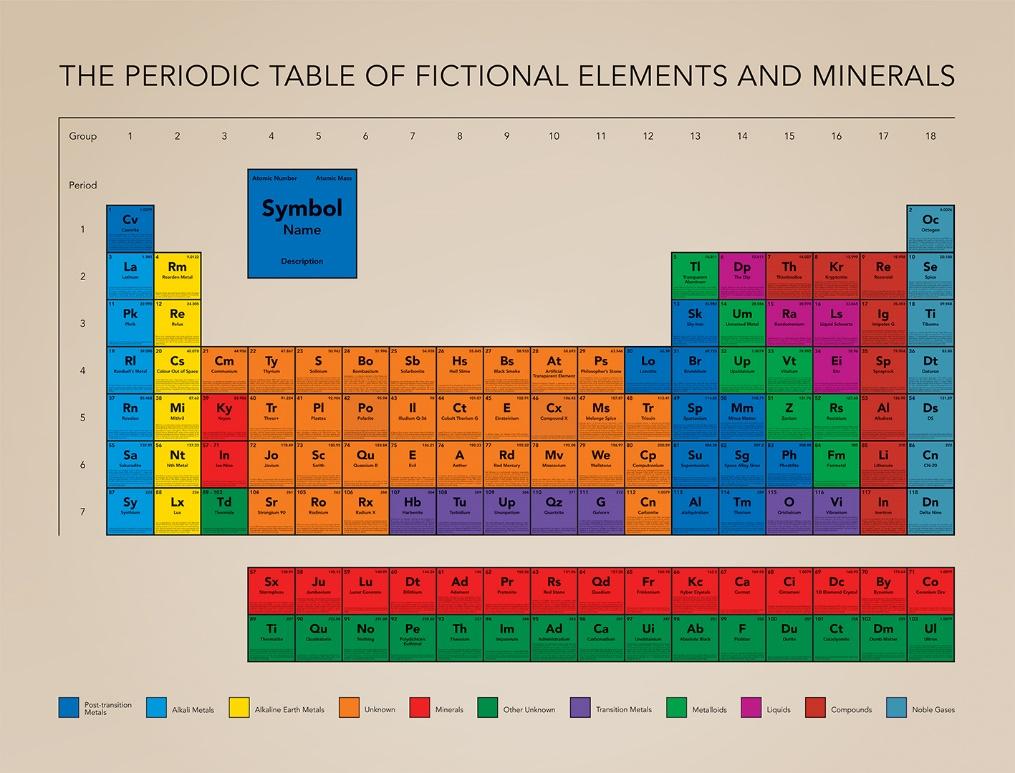 What does the Periodic Table have in common with Greta Thunberg, global Communism and Martian invasions? Celebrating 150 years of the development of the Periodic Table allows us to take a closer look at how related discoveries have changed the future. Apparently, the Periodic Table isn’t only used by chemists; it is appreciated by physicists and biologists sacrificing their lives in the labs for research that fundamentally depends on the discoveries of the Periodic Table. And even apart from the natural sciences, artists and ecologists equally discovered its potential, turning it into their own tool for communication.

From interning at the Israeli Weizmann Research Institute in Rehovot, I particularly remember an exhibition on Arts of Science. While blown-up lab gloves hung up randomly on lab corridors seemed rather weird and rarely accessible for reasonable interpretation, a gallery of science-related exhibits by Agnieszka Kurant, Vardi Bobrow and Yael Balaban caught my attention. Under the title “Old, Fake News”, the three artists discuss in their work the changing of our recent news’ value.(1) Based on previous experiments that show the majority’s incapability to distinguish between true and false scientific papers or news, it seemed more than questionable if we actually need truth or if opinion is the more important factor to rely on?

While the gallery consists of different approaches such as maps showing Phantom Islands, Kurant chose the Periodic Table to visualise information’s volatility.

Figure 1: “The Periodic Table Of Fictional Elements And Minerals” (3)

The first version could be found in any school chemistry lab, with the small difference of the non-existence of the displayed chemical elements. Element 15 seems to represent them all quite perfectly: Randomonium, with an atomic mass of 30.974 (don’t ask for the unit, it might not exist either), could represent the elements being absolutely arbitrary. But that would be too easy. As the description suggests, Randomonium originates in one of the famous “Scooby Doo” movies and lets costumes become their owner. What else? Other elements, like Mithril and Thor, are rooted in popular fictional worlds but there are plenty of other examples that catch up on political ideologies. Element 21, Communium, refers to a social utopia where Communist laws are successfully implemented.

Figure 2: “The Periodic Table Of Collective Delusions And Misconceptions” (4)

The second version looks similar but is a bit more specific in its contents. Now it’s about (probably) existing common misconceptions a larger part of the world holds. It remains arguable whether they affect every part of the world similarly; but they definitely don’t fail to humorously point out some of humanity’s collective false beliefs and, retrospectively, their ridiculousness. There are elements, like number 11, that report historical events where, for a long time, people believed in something we would call fake news. Who, in 2019, would even for a second consider the idea of a Martian invasion? Probably surprisingly many, were it broadcasted on TV and social media. But the more interesting part are the elements picking up current misconceptions. There is, for example, Element 24 explaining evolution. I am sure you have at least once imagined evolution as a person, listening carefully to Darwin’s laws and then picking the fitter one changing this world’s inhabitants from inferior to superior species? Surprisingly, this isn’t the case as evolution can’t think and therefore lacks intrinsic motivation. For more basic but essential “Fake News”, I strongly recommend having a look at the elements of Vitamin C, sugar, brain use or brainwashing. Maybe start off with the latter and make sure you don’t believe everything you read.

Apart from artistic projects criticising contemporary media, Ryan Jennings proves that science isn’t only STEM. The most recent example of fact-based and scientific content is the whole climate change debate, that admittedly is often instrumentalized for economic or political power. On the other hand, it’s the purest expression of a niche science branch that has become essential: geography and ecology. Never has the entire world been so interested in the Amazon rainforest (the forest, not the Amazon itself please), dying ice bears and the theory of the greenhouse effect. Since it’s become fashionable to go striking for the climate, everybody’s got an opinion; mostly rage and criticism. But there are also people like Jennings, author of a Periodic Table offering solutions.

Writing stories on the “It’s your Turn” blog, he introduced eighty-two realistic ways to face climate change.(2) Having even calculated the amount of CO2 the chosen methods are saving, it’s easy to rate different approaches based on their efficiency. Ranking within the highest, you can find various sustainable energy suppliers like onshore wind turbines or solar farms. But not only technological innovation, also solving existing issues like reducing food waste or educational fields including more effective family planning are some of the biggest CO2 savers. So there is work to be done on every level. And the best thing about it is: The problem is obviously not a lack of ideas! If you ever have trouble finding your own personal way of becoming an active part of the climate-savers, just have a look at the periodic table, move around by e-bike, grow your own bamboo tree, recycle your household and shower only twice a week. That should be worth saving more than fifteen Gigatons of CO2.

Jennifer  Miess, 19, is a German ambassador for YSJ. After having graduated high school last year, she spent a gap year at the Weizmann science camp in Israel and volunteering in Peru. She just started her medicine studies in Berlin and is looking forward to a career in science afterwards!