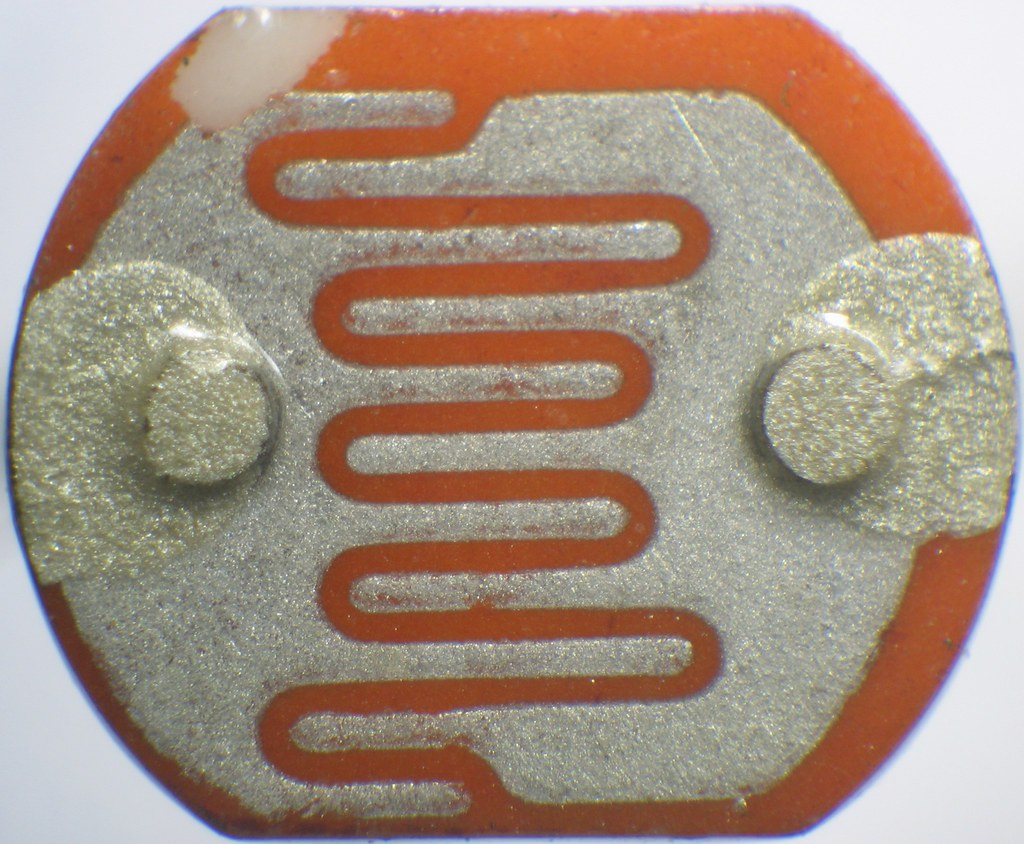 Figure 1: Picture of a photocell

This paper will discuss the accuracy of photocells in their ability to read fluctuating light intensity. The photocell will be subjected to 3 different light intensity patterns (in order of increasing complexity): square wave, triangular wave, and sine wave.

Figure 2: Three light intensity patterns illuminated by light source from least complex to most complex (all copyrights owned by author)

The brightness given by the light source and the resistance of the photocell will be scaled on a graph between 0-10 for the y-axis values. This means, the resistivity of the photocell will have a value of 10 when the brightness of the light source is 0 and vice versa. For the photocell to pass each of the 3 tests, its resistivity readings should be direct, or very close reflections of the light intensities over the horizontal line y = 5. This paper will include the results of each of the 3 tests, in the form of graphs, as well as a summary discussing the overall accuracy of a photocell.

This investigation all started with a fascination with streetlights. Interestingly, they only consist of a photocell and a light bulb which should stay off during the day and turn on during the night. It seemed like a very simple job for the photocell to only have to differentiate between bright sunshine during the day and pitch black at night. But what if the photocell had to look at all the light intensities in between pitch dark and sunshine? What if the full range of light intensities was illuminated in milliseconds rather than a whole day(24 hours)?

The hardware components for this project included: a 5 volt battery, an Arduino microcontroller, a circuit board, 6 breadboard jumper wires, two 250 Ω (ohms) resistors, one sheet of aluminum foil, one green LED, and a photoresistor.

In this investigation, the green LED is the light source. It will illuminate three different light intensity patterns over time: square wave, triangular wave, and sine wave. As noted in figure 3, the photocell and LED are facing each other so that the photoresistor can change its resistivity based on the light intensity illuminated by the LED.

LEDs come in different colors such as red, blue, green and yellow. Therefore, when picking a LED, the ability of the photocell to read a specific color should be considered. Almost all photocells only read light with wavelengths between 400 and 600 nanometers(nm) [1]. This would mean photocells are the most accurate when the light has a wavelength of about 500 nm. Since green light has a wavelength of 500nm according to the color spectrum, the green LED is used in the circuit.

Each of the 6 breadboard jumper wires have a function integral to the current flowing where it needs to. Along each side of a typical circuit board are two sets of negative and positive rails. These exist because it’s very common to connect components to power, ground, or both [2]. In this investigation the positive (red terminal), is used for connecting components to power and providing current whereas the negative (black terminal) is used for grounding. All 6 wires have a function and work in pairs. The white and balck wires together, the red and blue wires work together, and the yellow and orange wires work together.

Without the white and black wires, the LED will not be able to illuminate different light intensities and the photocell will not be able to read different light intensities and adjust its resistivity accordingly. The red and blue wires are assigned to the cathodes of the LED and photocell respectively. They allow the current that previously entered the LED and photocell through the anode to leave. The digital input 9 and analog input A0 that the red and blue wires are plugged into are used by Arduino code to assign input number 9 to the LED and A0 to the photocell. The yellow and orange wires use the black, negative terminal to ground the current.

The circuit also takes advantage of resistors. Resistors are electrical components that slow down current in the circuit. They function to ensure that other components aren’t provided with too much voltage or electric current [4]. The current flowing through the circuit should be equal to 20milliampheres (mA) or 0.02 amperes. This has been widely adopted in the field of engineering. 20 mA is the gold standard in industry because it can be run for long periods of time with minimal signal losses, will not be affected by load impedance or supply voltage, and has a low electromagnetic susceptibility [5]. The battery in this investigation has a voltage of 5 volts. Given this knowledge, Ohm’s law (

) can be used to choose resistors with just the right amount of resistivity.

Both of the resistors in the circuit have a resistance of 250 ohms (Ω).

Entering the lowest and highest photocell resistivity values into the Min/Max Normalization formula will scale the values from 20Ω – 346Ω to 0Ω – 1Ω.

Now that both the LED’s light intensities and photocell’s resistances are scaled from 0Ω – 10Ω, each of the 3 light intensity patterns (square wave, triangular wave, and sin wave) can be illuminated by the LED through code.

The square wave test is the most simplistic out of the 3 tests – it is the easiest for the photocell to pass(2). Because the LED will only illuminate 2 values, full brightness and no brightness, and will keep its brightness for 200 loop iterations before switching to the opposite intensity, the photocell has the best chance to pass the first test. It should also be noted that the first derivative with respect to time of the light intensity, \[\frac{d(lightintensity)}{dt}\]

Figure 10: A square wave – the most simplistic wave out of the three wave illuminated by the LED

Figure 12: Triangular Wave – second most complex wave out of the three waves illuminated by the LED

Figure 14: Sine Wave – Most complex wave out of the three waves illuminated by the LED

The for loop declared on line 14 iterates 360 times for the 360 degrees in 1 period of a sine wave9. For each iteration, the degree is incremented and the light intensity changes. Line 16 uses the value of variable degree to change the light intensity of the LED. Fortunately, Arduino’s integrated development environment (IDE) lets the programmer call a sin method that models data as sine wave. The IDE, however, only accepts units in radians – not degrees. Multiplying degrees with , changes the units from degrees to radians. In order to use PI (, the IDE needs the header #include <math.h> on line 1. Because the LED should illuminate the full range of light intensities, 0 – 255, the sine wave’s range should be 0 – 255. The equation below is the equation of a sine wave.

The results of each of the three tests in this investigation are presented graphically. Each of the three tests have their own graph. Each graph has three curves: light intensities, photocell resistivity values, and the line of reflection, y = 5. Each curve will have its own color: blue for the light intensities, green for the photocell’s resistivity values, and red for the line of reflection.

Figure 16: Color coded key for the three different curves in each graph

With all 3 tests conducted in order of increasing complexity (square wave, triangular wave, and sine wave) and the data plotted up graphically, the photocell has provided very interesting results. Based on figure 17, the photocell has passed the first test (square wave test), exceeding expectations. The photocell’s resistivity values were always a direct reflection of the light intensities over the line of reflection.

Like in test two, the photocell was not sensitive enough to adapt to the constantly changing light intensities. However, because the magnitude of \[\frac{d^{2}(lightintensity)}{dt^{2}}\] was generally less in test 3 than in test 2, there were less jagged lines in the results. This means decreasing the rate at which light intensities change will allow the photocell to measure light intensities more accurately – a factor to consider when examining possible applications for the photocell.

For example, photocells, with the assists of heat cameras, can recognize and control forest fires before the fire begins to spread.

“Heat Camera exhibit” by the_exploratorium is licensed under CC BY-NC-ND 2.0

Photocells, attached to flying drones, can look specifically for orange, red, and yellow light (565nm – 740 nm). The photocells will be looking specifically for fire while filtering out everything else it sees. The data in this investigation suggests that photocells can sense when light intensity is increasing and decreasing. On that basis, the photocell can track the growth and spread of the wildfire as the originally black and purple area will turn red. Because of the stark contrast in purple and red, the photocell will accurately discern fire and land without fire. Once the photocell recognizes the forest fire, authorities can be contacted. The photocell will continue to aid the authorities by providing information about the growth and spread of the forest fire.

However, because the triangular wave and sine wave tests highlighted the insensitivity in photocells, there are many areas where photocells should not be applied, including x-ray and radiation detection.

“X-Ray” by Adrian Barnes is licensed under CC BY 2.0

With the light intensities varying so little, the photocell will not not be able to discern fractures or injuries accurately consistently – a risk that should not be taken when lives are on the line.

This investigation would not be conducted without Mr. Taylor, physics teacher for instilling a passion for physics, electronics, and all things engineering. Much thanks to Mr. So, without whom the author would never understand programming language C. Dr. David Parent is very appreciated for mentorship and expertise in the world of electronics.

Ankit is a high school senior in California with a passion in computer science, electronic, physics, and all things engineering. In his free time, he loves to sing and play guitar, often playing for the seniors in his local senior home. He is really interested in aviation and hopes to have his own pilots license and plane one day.

One thought on “Just Streetlights?”