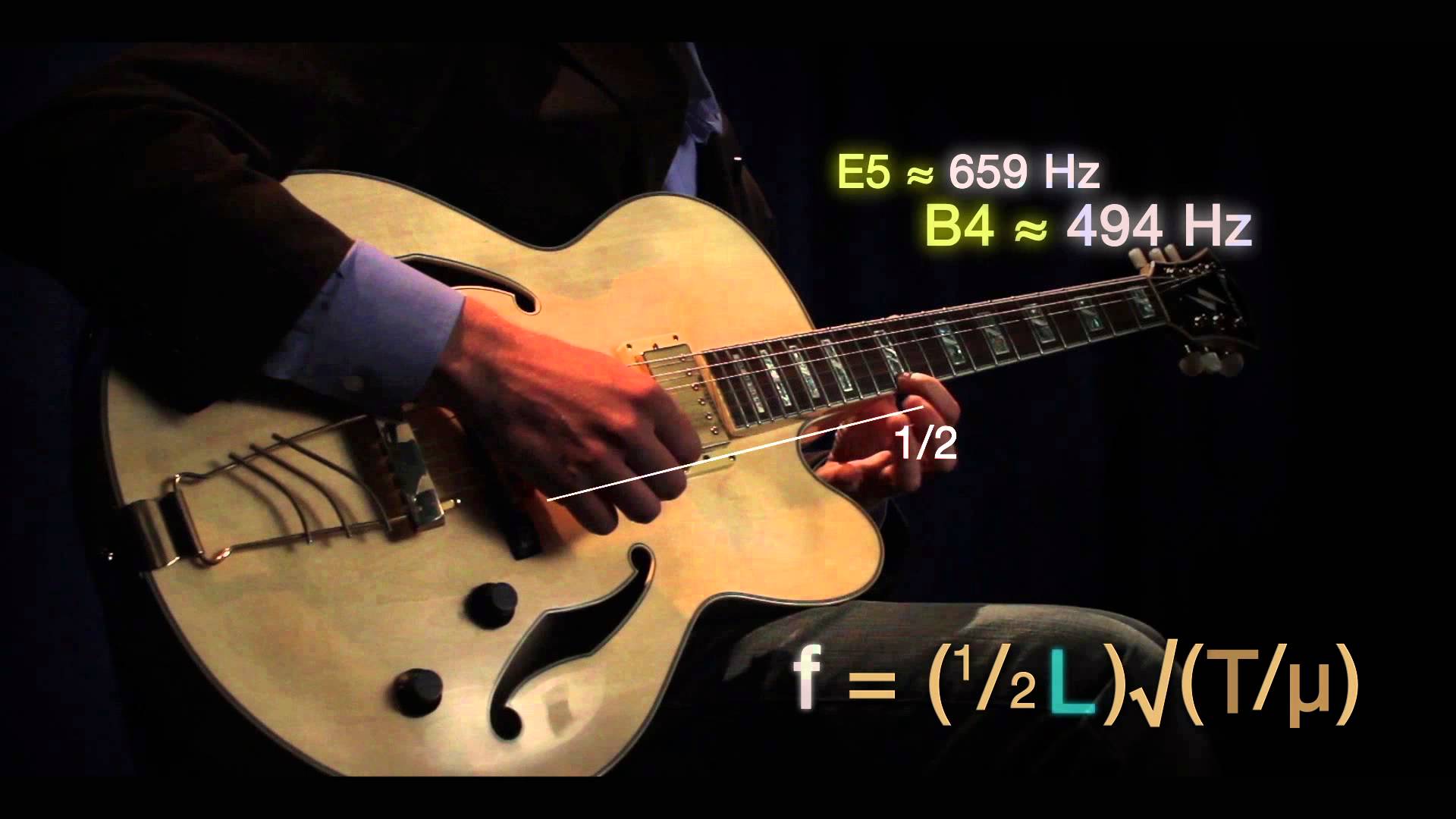 Physically, sound waves are vibrations. The higher the amplitude, the louder the sound and the longer the wavelength, the lower the pitch of the sound. The pitch of the music is called the frequency of the wave and this is inversely proportional to the wavelength. Hertz (Hz) are the units of frequency; one hertz is one vibration per second. For example, a frequency of 261.62556Hz is equal to middle C on a piano so this means that the sound wave for middle C vibrates slightly more than 261 times per second. Notes that are the same have a relationship with their frequencies. The C one octave lower has a frequency of 130.81278Hz; exactly half as big. The C one octave higher has a frequency of 523.25113Hz; exactly twice as big. This relationship is basic mathematics because if the length of the string in the piano was halved, then the pitch would double. For example, on a guitar, different frets represent different notes. If you held down a fret that was half the distance away from the bridge than that of another fret, the same note would be heard at a higher pitch.
The relationship with the frequencies of sounds dates back to to around 500BC where the Pythagoreans believed that everything in the world was governed by numerical patterns and mathematical shapes. According to legend, whilst passing a blacksmith’s shop, Pythagoras noticed that hammers of different sizes made noises of different pitch when striking metal, and that hammers related by simple numbers — for instance one three times the size of another — made noises that harmonised. However this wouldn’t work in practice because the shapes of hammers are too complicated to vibrate in harmony. However, on the whole, it is true that the smaller hammers made higher pitched noises than the larger hammers.
Musicians describe two notes with the interval that is between them. For example, to get from middle C to the C an octave higher, move up seven white keys. These two notes are so harmonious that they can sound a little bit bland, so harmonies are rarely based on octaves. On a string instrument, a string half as long plays a note an octave higher, therefore the octave is associated with a simple numerical ratio of 2/1. Other harmonies are also associated with simple numerical ratios. The most important for Western music are the ratio of 4/3, a fourth, and a ratio of 3/2, a fifth. The geometry is easy to see on a fretted instrument because the fret for a fourth is one quarter of the way along, the fret for a fifth is one third, and the octave is halfway. This can be verified by measuring the distance.
These ratios led to the scale now used in most Western music by providing a theoretical bases for a musical scale. If we look at a base note and then ascend in fifths we get strings of length:
1 3/2 (3/2)^2 (3/2)^3 (3/2)^4 (3/2)^5
All of these notes are too high pitched to remain within an octave however because of the simple ratio for octaves we can lower them down by dividing by 2 so that all fit between 1 and 2, or the space of an octave.

Therefore the multiplied out fractions become:
1 3/2 9/8 27/16 81/64 243/128
Arranging these is ascending numerical order obtains:
1 9/8 81/64 3/2 27/16 243/128
These correspond quite closely to the notes C D E G A B. Notice that F is missing. To the ear, the gap between 81/64 and 3/2 sounds wider than the other so F is inserted at a 4/3 to fill the gap because it is the ratio for the fourth. It is also useful to insert the C at the end to show that the musical scale can be based entirely off of fourths, fifths and octaves. These notes only account for all the white keys on the piano but there are also black keys. These notes appear because there are two different ratios between successive numbers in the scale: 9/8 (a tone) and 256/243 (a semitone). The names ‘tone’ and ‘semitone’ doesn’t mean that a tone is twice that of the semitone. Numerically, a tone is 1.125 and a semitone is 1.05. Therefore a tone is a larger change in pitch than the semitone. Two semitones give a ratio of 1.052, which is 1.1025, not far from 1.125. This shows that two semitones are close to a tone.
If we divide each tone into two intervals, that are each close to a semitone, we get a 12-note scale. Therefore 12 semitones make an octave, a ratio of 2/1. This means that to get an octave we need to multiply a starting frequency twelve times in succession by a fixed amount that corresponds to a semitone. This result has to be double the starting frequency. So the ratio for the semitone, raised to the power of twelve must equal 2. This can otherwise be written as 2^(1/12), or the twelfth root of 2. This number leads to an equitempered scale so the ratio on an actual piano would be slightly different. A trained musician may be able to detect the difference, however most people don’t notice.

One thought on “Mathematics in Music”