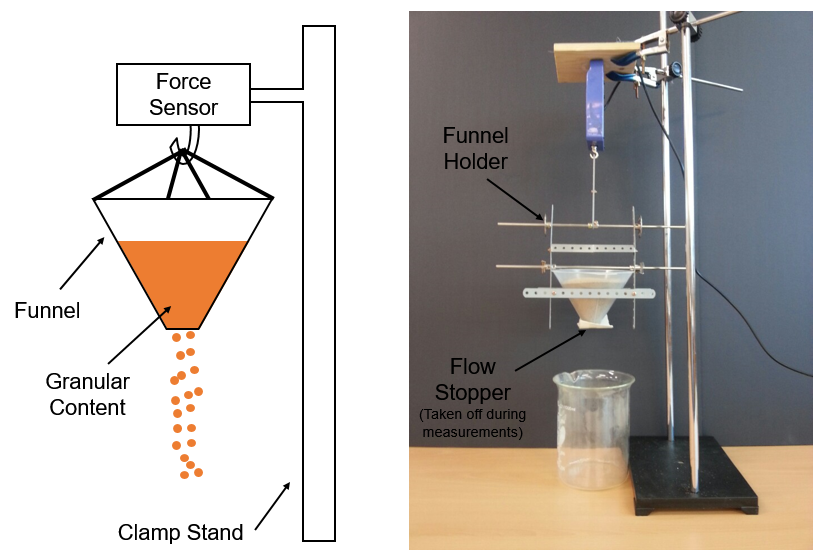 This paper presents an apparatus to measure the flow of granular matter through a funnel with a force sensor. In addition to being easily reproducible, our proposed method enhances measurement accuracy from the popular method that uses a stopwatch. We notice, however, that our proposed setup induces an unwelcome force that confounds force sensor readings. This issue is discussed, and its significance on measurement accuracy is evaluated through theoretical and experimental work.

A well-known (and widely used) method of measuring the flow of granular matter through a funnel makes use of a stopwatch. Using the fact that granular flow through a funnel is constant [1], the rate of mass flow is determined by dividing the initial mass of the granular content inside the funnel by the time it takes to empty. While this method provides a great estimate of the flow rate, the time taken for the funnel to empty is recorded with a stopwatch, which relies on one’s reaction time. This method therefore cannot be trusted for its accuracy. Hence, to provide an accurate alternative, we propose a method that makes use of a force sensor.

A schematic illustration and photo of our proposed apparatus is depicted in figure 1. The force sensor records the weight of the funnel and its granular content as it flows out the funnel. The data values recorded by the force sensor are divided by gravitational acceleration (g) in order to convert weight into mass. A linear fit is then posed upon the recorded data, and the slope indicates the rate of mass flow.

An Issue with the Method

Unfortunately, however, the proposed method induces a measurement error. As its granular content flows out of the funnel, the funnel’s center of mass (CM) accelerates downward. As a result, an additional force, caused by CM acceleration, acts in addition to the weight of the funnel and confounds force sensor recordings into a mix of the two forces when weight was the only force we wanted to observe.

This phenomenon, expressed mathematically, is as follows:

is the mass flow measured by the force sensor,

is the detected mass flow due to the weight change, and

is the mass flow detected due to CM acceleration.

is the real value of mass flow and

is the error discussed above. In order for our method to give accurate measurements,

, and this only happens when

is negligible compared to

, we introduce ζ, the ratio between

and tell us if the issue with our setup is negligible or not. To do so, we model for

To find , we first start by modeling

, which is the force caused by CM acceleration.

is the radius of the orifice, ρ is the density of the granular content, and is R the ratio between the longer radius and the shorter (orifice) radius.

by taking a time derivative and dividing by g.

where C is a dimensionless constant that depends on bulk density. However, as long as the orifice is considerably larger than a single granular particle, C takes on a value near 0.5 [2].

Approximating as 0.5 and taking a time average of equation (8) to get rid of the time factor gives the average ratio

attains a value significantly low, e.g. under 0.01, then

, and the issue with our method is negligible.

The results of our demonstration are depicted in figure 3. We removed the force sensor readings at periods before and after the sand was flowing (when weight was constant), divided the recorded weight by g and posed a linear regression on the scatterplot. As a result, both slopes, with a high r-squared value, gave the mass flow rate of this funnel as approximately 65.8 g/s. This result is in good agreement with the mass flow rate we found using a stopwatch, where an average of thirty trials gave 65.4 g/s.

Figure 3: Mass of the granular content versus elapsed time, as recorded by a force sensor.

Using a force sensor, we presented an apparatus to measure the flow of granular matter through a funnel. Concerns about inaccuracies due to CM acceleration were raised, and so we went on a journey to evaluate the issue. Applying our findings in equation (9) on our funnel determined the error to be negligible, and a demonstration further showed that our proposed method produces accurate measurements. However, readers who wish to use this method are encouraged to plug-in parameters of their funnels into equation (9) before fully trusting the accuracy of the method.

Junghwan Lee is a student in Cheongshim International Academy, scheduled to graduate in 2019. Having first picked up physics in his freshman year, he has expanded his passion for physics through competitions and research experiences. He currently aims to pursue physics at universities.

Kyeong Min Kim has graduated from Cheongshim International Academy in 2018, and will be matriculating to Oxford University as a physics major. As a physics enthusiast, he has represented South Korea in the International Young Physicists’ Tournament and wrote various research papers himself.