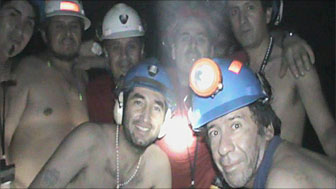 underground for over two months has nearly completed the project, and the tunnel is expected to be operational soon. Although there have been delays caused by the risk of tunnels collapsing, the T-130 drill has little more than 100m left to drill until it reaches the tunnels, and mine rescuers and medics have begun rehearsals to rescue the 33 men.