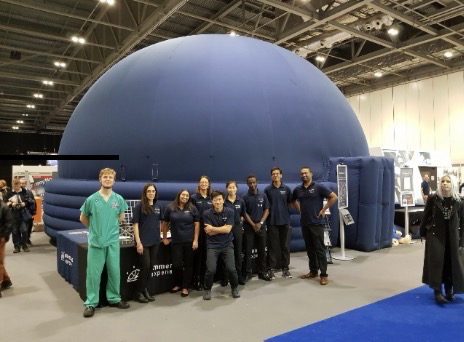 New Scientist Live is one of the largest science festivals in the world. Held at the ExCeL Centre in London, it ran from Thursday, 20th September to Sunday,  23rd September 2018. I attended as a volunteer (only on the Saturday and Sunday though as I had school!), and relished in my learning experiences from the event. The tickets were very expensive and so at first, I volunteered mostly because I had desperately wanted to attend the event, having read and heard about all the talks for the event. I had found out about the event in early April and therefore managed to apply for a volunteering role – I was incredibly fortunate to have the opportunity to attend and even volunteer. This event is very important for science enthusiasts: students, teachers, or just members of the public.

A month before, in August, I received an email specifying my role as a volunteer at the event, and that I would be closely working with one of the stalls, ‘Immersive Experiences’, bringing with them to the event, the ‘World’s Largest Mobile Planetarium’ (Figure 1).

I was extremely excited about the prospect of volunteering at a famous science festival — especially for the first time — but also, I was worried about not being able to enjoy the festival itself and attending all the talks that I had originally wanted to go to. However, all worry was replaced with awe when I stepped into the hall at 9:30am. I was witnessing the calm before the storm (Figure 2), the silence before the hustle and bustle of people scurrying around when gates opened at 10am. I walked to my assigned stall, proceeded to change into the uniform and was then briefed about my role and what was expected of me. There was a short break for around 20 minutes that I could take whenever I wanted to and a lunch break at 1-1:45pm, for which my lunch would be refunded.

Throughout the event, I had two posts: one inside the dome running shows, and the other at the entrance to the dome, informing people of the details for upcoming shows and directing them to other volunteers and staff who would have further information if I did not. I had enjoyed my post inside the dome as I was essentially able to watch free shows but after a few times, it had become repetitive and boring. I much preferred my post on the outside of the dome as I was able to talk to more people and got some satisfaction after helping people choose their next show, then seeing them come back, bringing their family and friends.

During my break, I decided to tour around the stalls (Figure 3) with another volunteer to see what was on. We then realised the benefit of being a volunteer – volunteers and staff running other stalls understood our lack of time for wandering about; therefore we were automatically pushed to the front of queues or given extra freebies (items given out for free, like badges & pens!). Personally, my favourite perk was when I came back to volunteer the next day (before gates opened) and was able to do all the VR experiences that were previously too popular and too busy to even catch a glimpse of (roller coaster, flight simulation, etc.) straight away without a single queue.

Other than numerous freebies (Figure 4), I took away some skills and experience from volunteering at New Scientist Live. I had developed my social skills, not just by talking to lots of people at the front of the dome, but also by learning how to work with a team of people who were, at first, strangers and over the weekend, became friends! And I now understand how these events work – before I had no clue. From this experience, if the opportunity arises again, I would love to volunteer at another STEM event! I deeply recommend volunteering at New Scientist Live or just any science festivals – some festivals vary on the age which you can apply to volunteer, so it is just a case of researching for the right one for you!

Lizzy is an A-Level student studying Maths, Biology, Chemistry and Computer Science. In her spare time, she enjoys playing chess, rugby and does air cadets. She would like to pursue a career in medicine.